At age seven, Gabrielle Guo is already a prize-winning, exhibited artist - in NSW's most venerable institution no less.

Titled 'My little sister Vivienne', the pencil and marker drawing of her cherry gobbling younger sibling - complete with mischievous eyes and juice dribbling down her chin - claimed the Young Archie award in the five-to-eight age category while on show at the Art Gallery of NSW on Saturday. 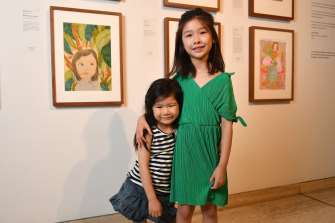 Gabrielle Guo with her sister Vivienne and winning painting at the Art Gallery of NSW on Saturday. Credit:AAP

"Even though they fight sometimes, they're very, very close," Gabrielle's mother Sharon told the Sun-Herald of the relationship between artist and muse following her elder daughter's win.

Ian Kim, a nine-year-old prodigy from Lidcombe, could only summon one word when he won in the nine to 12 years category for a portrait of his father: "Shocked."

Though guest judge and 2020 Sulman Prize winner Marikit Santiago had a lot to add about his painting, 'My dad's brush'.

"You can’t deny the technical skills for such a young age," she said of the artwork now on display at the gallery at the same time as the Archibald, Wynne and Sulman prizes.

“I thoroughly enjoy judging this competition and am always moved and astounded by the depth of emotion, imagination and skill demonstrated by these budding young artists, who work so hard to capture the character of their subjects."

Ms Santiago, who often collaborates with her children when working creatively, was awarded the this year's Sulman Prize for her work 'The divine', which portrays her three children.

They are among 40 finalists to have their works displayed after responding to a brief to submit a portrait of someone who plays a significant role in their life.

An only child, Ian and his artist father Sam have formed a special bond over painting after joining in on lessons taught by Mr Kim at their home studio.

"His father's like a friend to him," Ian's mother, Okhee, said.

While the painting captures his father's vocation and warming demeanour, Ian said there was a hidden message involved: "There is a secret regarding a brush in my family. It is that my dad has his very own brush on his face: it’s his beard. That brush paints happiness onto me."

"When my dad brushes me with his own brush, I always burst out with so much laughter and cannot help falling off my chair," Ian said in his submission.

Schalke terminated the contract with Ibisevic and suspended Bentaleb and Harit
Bielsa, flick, Klopp, Lopetegui and Zidane are the contenders for the best coach of the year award
Messi, Ronaldo, Lewandowski, Ramos, de Bruyne and 4 Liverpool players are among the contenders for the best
Zlatan about getting the Swedish Golden ball: I Plan to win it in 50 years
Anton Ferdinand was racially abused in comments to a post about a documentary about racism and Terry
Zlatan is named player of the year in Sweden for the 12th time
Ronaldo scored the 70th goal in home matches of the Champions League, repeating the record of Messi
Source https://www.theage.com.au/national/nsw/master-strokes-on-display-for-young-prodigies-20201024-p5686y.html?ref=rss&utm_medium=rss&utm_source=rss_national

Has the government sentenced young Queenslanders to a life of high taxes?

Patron filmed unconscious, held around neck as guard evicts him from hotel

'I believe it is time for renewal': Labor MP Janine Freeman to retire at next election

'We've got a way forward': V'landys closing in on suburban stadiums dream

Victorian budget: Call to expand voucher plan to bring back thousands of jobs

Repeated emotional abuse set to be outlawed in Queensland

Not so fast with your wrecking ball, Treasurer. There's some beauty in Sydney's ugly ducklings

One of 11 charged with murdering teen pleads not guilty, committed to trial

'That bugger's nearly 90': Gerry Harvey, inspired by Murdoch, plans to retire at 100

Casting cares to the wind, they sail off into the languid waters of the Yarra