Tyrone May will be thrown into the Penrith Panthers' starting side for Sunday's NRL grand final and given the task of shutting down Melbourne's lethal left-edge duo of Justin Olam and Josh Addo-Carr.

The Herald can reveal Penrith will roll the dice for a second consecutive week, with coach Ivan Cleary opting to start May at right-centre alongside winger Brian To'o, winning the nod over Brent Naden. Naden was named at centre on Tuesday, but the 24-year-old will start the game on the bench as part of a late reshuffle to the minor premiers' line-up. 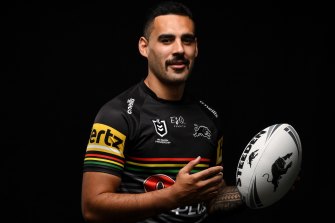 Tyrone May is set to start in the grand final for Penrith.Credit:Grant Trouville/NRL Photos

Penrith are reluctant to go into the game without a specialist outside-back option on a bench that will also include Kurt Capewell, Moses Leota and former Roosters prop Zane Tetevano.

Despite starting at centre in the six weeks leading into last week's preliminary final, Naden was dropped to the bench for the clash with the Rabbitohs and didn't feature in his side's 20-16 win.

The Panthers were privately concerned with Naden's defence following the team's narrow semi-final win against the Roosters in the opening week of the play-offs. The Wellington junior was responsible for his side conceding the opening try of the match to veteran centre Josh Morris.

Naden has been a good luck charm for the Panthers, who have won all 18 games he featured in. He has played 11 games at centre, six on the wing and sat on the bench for 80 minutes last week.

May has played only five of his 15 games this season at centre. He is predominately used as a utility off the bench. It's been a whirlwind 18 months for the 24-year-old, who was stood down by the NRL under the code's no-fault policy for his involvement in the club's sex-tape saga.

May recently told the Herald he was indebted to Cleary for the support he showed him throughout the ordeal that could have potentially seen him serve time behind bars.

"I knew the Cleary family before Ivan started coaching here," May said. "The relationship is unbelievable. I can talk to him as a coach, and then he can turn it off and talk to me as a mentor. He told me from the get-go he was going to back me. He said whatever happens I will stay with you and back you.

"It gave me confidence, it was probably subconsciously I knew that if it all went to shit, someone had my back. The whole Cleary family had my back. I want to repay them for that."

Van Dijk - best Central defender of 2020, Trent-right, Robertson-left (ESPN)
Massimiliano Allegri: Ronaldo is a top player in terms of mentality. He has a new goal every year
Borussia Dortmund presented a collection with Spongebob as part of a deal with Nickelodeon
Woodward on Manchester United and trophies: there is a lot of work Ahead to achieve the stability needed
Neuer - best goaltender in 2020, Alisson-2nd, Oblak-3rd (ESPN)
Liverpool are Interested in 21-year-old Leipzig defender Konate
Niko Kovac: I'm Waiting for Golovin to return. But it might be better to wait another week or two
Source https://www.theage.com.au/sport/nrl/may-to-start-in-grand-final-for-panthers-20201024-p5688g.html?ref=rss&utm_medium=rss&utm_source=rss_feed