Online comedy and music performances planned for the coming days and weeks in Melbourne can not go ahead under the strict stage four pandemic restrictions, in another blow for the state's reeling arts sector.

Venues and performers had been counting on a continued exemption, similar to the one granted to religious ceremonies, for performances recorded or streamed for online broadcast. 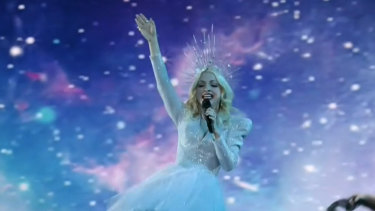 Kate Miller-Heidke was to perform live on Saturday however the gig may now be cancelled.Credit:ninevms

Hopes were raised on Sunday when new directions from Victoria's health department appeared to confirm the exemption. On Thursday morning, several organisations, including the state government's own Delivered Live, still thought they could continue performing - under strict hygiene precautions - at studios across the city.

However, the list of "permitted work premises" issued by the government late Wednesday night made no exception for performance, with the care of animals at zoos the only kind of work permitted in the "arts and recreation" category.

Online productions have proven a vital lifeline for the performing arts sector, which was one of the first industries to shut down due to the pandemic. Government figures have showed arts workers are among the hardest hit by the lack of work.

A government spokeswoman said the restrictions and exemptions were final.

However, the spokeswoman added, "streaming for the purposes of internet broadcasting can still happen at home, like what Isolaid do. We’re not banning creativity. It’s about limiting travel to only essential workers for essential purposes."

Easey Comedy, which had a livestream planned for Thursday night hosted by Adam Hills from its Easey Street venue, released a notification saying tickets would be refunded and they would be "back in six weeks and it will be one hell of a show when we are".

"We are all so sad to not be able to bring this little bit of joy into your living rooms tonight... stay safe and healthy. Melbourne we love you."

A spokeswoman said: "Everyone involved knows what we need to achieve here, so of course we’re going to follow the rules".

The Melbourne Digital Concert Hall (MDCH), which earlier in the week was confident it could continue streaming live classical music from the Atheneum, pre-recorded several concerts on Wednesday in case it was locked down.

"They were superb, complete performances so we are really looking forward to showcasing them," co-founder Chris Howlett said.

MDCH has a new six-week program of 36 recitals to broadcast from six cities across the country, starting next week in Sydney. And the online platform will use the 120 concerts already recorded this year to raise money for Melbourne musicians who now cannot play.

The state government-founded Delivered Live program was still promising on its website on Thursday afternoon that under stage four restrictions "another great lineup of music and comedy [will be] beamed out of our custom built studio" on Saturday night. The line-up was to include Kate Miller-Heidke.

However, it will not go ahead in the planned format and producers were working to put together an alternative program which did not include new performances at the studio.

Leeds United have offered Bayern 20 million euros for Nuisance. Clubs in final stages of negotiations
Pep has already spent under 480 million on city's defence, and this week broke the club record for spending on a defender
The APL referees will be asked to soften the hand play. But the League cannot deviate from the rules
Lyon values Aouar over 40 million euros. Arsenal offered 35
Tottenham are not selling Mourinho's merch - because Chelsea still own the trademark rights. But it didn't stop Manchester United
Shomurodov is close to moving from Rostov to Genoa for 8 million euros (Sport Italia)
Pobegalov about 12 cases of covid in Shinnik: I hope we can start training by October 4
Source https://www.theage.com.au/culture/theatre/melbourne-lockdown-slams-brakes-on-online-performance-plans-20200806-p55j5h.html?ref=rss&utm_medium=rss&utm_source=rss_culture