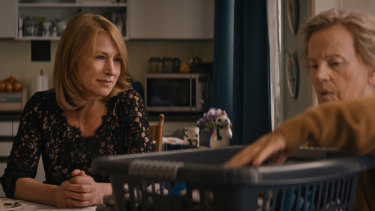 “Did it bother you that nobody liked you?” sighs Lara’s replacement in her dull public service managerial role. It is Lara’s 60th birthday; it is unlikely she spent a minute of those 60 years trying to be liked. Director Jan-Ole Gerster, who had an unexpected success with his Berlin slacker film A Coffee in Berlin in 2012, ventures here into another existential void: the loneliness of middle age. Lara is a successful stage mother; her pianist son Max is launching his career as a composer that night with a recital at one of Berlin’s great concert halls. She is not invited. To some extent, Gerster covers the same ground as Michael Haneke in The Piano Teacher; Lara is the product of a similarly driven Teutonic cult of musical excellence. But while Isabelle Huppert’s teacher led a warped, destructive erotic life, Lara has fixated on motherhood and royally mangled it; tormenting her son into the career she would have liked for herself until she cannot speak to him without criticising. Corinna Harfouch gives an extraordinary, minutely controlled performance as Lara that has deservedly garnered several prizes; Tom Schilling, the hipster star of A Coffee in Berlin, is barely recognisable as tight-jawed Max. SB 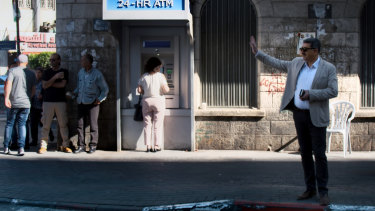 Musa Hadid on the streets of Ramallah in Mayor.Credit:MIFF

There’s nearly always something faintly comic about a mayor, and Musa Hadid, the hero of this fly-on-the-wall documentary from US filmmaker David Osit, is no exception. Shot over a few months in 2017, the film chronicles an especially challenging period of Hadid’s tenure as mayor of the Palestinian city of Ramallah, just north of Jerusalem on the West Bank. When US President Donald Trump makes the politically charged decision to recognise West Jerusalem as Israel’s capital, the collective local response is outrage – though it takes a while for Hadid to get up to speed, since he doesn’t have cable TV in his office and by his own account doesn’t “follow Trump news”. A spectacled fellow in a grey moustache, Hadid at first or even second glance is a bit of a buffoon, and Osit gets considerable comic value out of the intrinsic banality of local government, in the manner of his fellow documentarian Frederick Wiseman (though mercifully not at Wiseman’s habitual length). But once we start to see Hadid engaging with the wider world, the film becomes a tribute to his valiant effort to preserve some kind of dignity, not only for himself but for the population he serves. JW

KILL IT AND LEAVE THIS TOWN 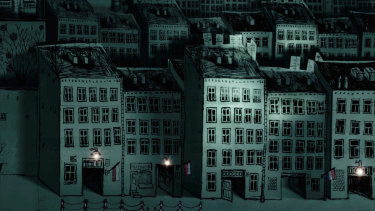 Kill It And Leave This Town.Credit:MIFF

Anyone nostalgic for old-school Eastern European animation will thrill to Mariusz Wilczynski’s elaborately surreal evocation of the `70s, when the factories of his home city of Lodz belched smoke over the houses and nobody in a shop could be bothered actually serving customers. Wilczynski is 60; his flicker-book evocation of his childhood sketches an often deliberately crudely drawn but meticulously detailed picture of Poland as a nation of abusive mothers, exhausted children, sadistic soldiers, lackadaisical officialdom and marauding insect pests, set to semi-clandestine Polish pop songs and the twanging 12-bar blues that was synonymous with rebellion behind the Iron Curtain. More specifically, he is intrigued by his own beginnings – how his parents met, bouncing in his cot while they sing Christmas carols, a disastrous trip to the beach with his father – in sequences where the past shares the space with his hand-drawn present self, a whale-like naked man with corkscrew wisps of hair and a melancholically crumpled face. This is Wilczynski’s genius: to comprehend the limitless malleability of animated images – that objects can shrink or grow in relation to each other, that a fish can turn into a man that can in turn become a duck, that absolutely anything can happen – and then let it rip. SB 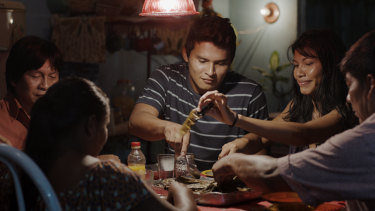 In the city of Manaus in Brazil, a middle-aged widower (Regis Myrupu) virtually sleepwalks through his dull, lowly job in the shipping container industry. As his grown daughter (Rosa Peixoto) prepares to leave him behind, he develops a sickness that may offer a perverse kind of liberation, luring him towards the Amazon rainforest that surrounds the city and encouraging him to rediscover his tribal roots. This first fiction feature by Brazilian director Maya Da-Rin owes more than a little to the style made famous on the other side of the world by Thailand’s Apichatpong Weerasethakul (Cemetery of Splendour): the same offhand interweaving of nature, technology and magic, accomplished through “neutral” wide shots and flat non-professional performances. Da-Rin also shares Apichatpong’s interest in glowing lights, buzzing sounds and medical equipment – and there’s even a mysterious beast lurking in the margins of the tale, like the tiger in Apichatpong’s Tropical Malady. As a political statement The Fever is less oblique than Apichatpong tends to be, but on the whole Da-Rin plays it comparatively safe, both in her visual style – there’s no lack of conventional continuity editing – and in a plot that follows a single character on a species of “hero’s journey” into the unknown. JW

It's time to learn the names of new Borussia heroes. Now there are 17-year-old boys making goals
Paulo Fonseca: it's Important to bring Smalling back to Roma. We have only 3 Central defenders
Arteta about 2:1 with West ham: Arsenal made life difficult for themselves with losses, but they fought and believed in victory
Palace midfielder Townsend: Could have beaten Manchester United with a bigger difference. We had moments
Philippe Coutinho: I am motivated and I want to work hard to make everything work out well on the pitch
Torres on Chelsea: I Thought I could remain a top player, but I was unstable. Although there were enough successes
Neville on the broken penalty against Manchester United: an Absolute disgrace
Source https://www.smh.com.au/culture/movies/miff-ventures-into-troubled-landscapes-both-personal-and-political-20200812-p55kw4.html?ref=rss&utm_medium=rss&utm_source=rss_feed