US Senator Bernie Sanders said he will introduce legislation to tax what he called the "obscene wealth gains" from billionaires during the coronavirus crisis.

Sanders, a self-described democratic socialist, made the announcement in a Twitter post on Wednesday evening. Last year, while running for the Democratic presidential nomination, Sanders embraced a proposal that would tax fortunes above $US32 million ($44.4 million) at 1 per cent, with an increasing rate that would top out at 8 per cent over $US10 billion.

This time, he's directed his focus to the profits billionaires have made since the COVID-19 crisis started. Sanders wrote that a 60 per cent tax on the windfall gains from 467 billionaires between March 18 and August 3 could raise more than $US420 billion, which he said would be enough to allow the national health insurance programme Medicare to pay all out-of-pocket health-care expenses for everyone in the US in the next year. 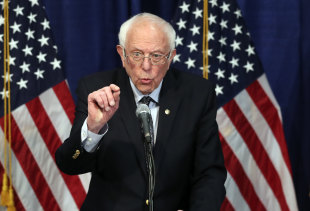 "It is morally obscene for billionaires to use a global pandemic as an opportunity to make outrageous profits," Bernie Sanders said on Twitter.Credit:AP

The senator's office didn't respond to a voice mail and email after normal business hours.

While the pandemic has left millions of Americans unemployed, the collective fortune of America's billionaire class has surged since January, according to the Bloomberg Billionaires Index.

The world's wealthiest family, the Waltons of the Walmart stores chain, is richer than ever, and tech companies have become so powerful that some of the industry's moguls had to defend their businesses to US Congress last week. The market value of five of the largest American tech companies now represents almost a third of US gross domestic product.

The world's richest man, Amazon.com's Jeff Bezos, has made $US74.9 billion this year alone, pushing his fortune to $US190 billion. Elon Musk of Tesla has added $US42.5 billion, taking his wealth to $US70 billion, while Facebook's Mark Zuckerberg is $US16.2 billion richer, with a $US94.5 billion net worth.

A Sanders tax on billionaire gains during the pandemic would need to get through Congress to take effect, which is virtually impossible given that Republicans control the Senate. And while the pandemic has renewed progressive demands to soak the rich, many Democrats have steered clear from backing a direct wealth tax.

Presidential candidate Joe Biden's proposed $US4 trillion in new taxes avoids such a levy entirely and focuses instead on added income and payroll taxes for high-income individuals.

In his Twitter post, Sanders contrasted the gains made by the likes of Bezos and the Walton family with the US's continuing high unemployment and growing food insecurity.

"In all likelihood, in the midst of everything else, we are currently witnessing what is likely the greatest transfer of wealth from the middle class and the poor to the very rich in the modern history of this country," Sanders wrote.

Leeds United have offered Bayern 20 million euros for Nuisance. Clubs in final stages of negotiations
Pep has already spent under 480 million on city's defence, and this week broke the club record for spending on a defender
The APL referees will be asked to soften the hand play. But the League cannot deviate from the rules
Lyon values Aouar over 40 million euros. Arsenal offered 35
Tottenham are not selling Mourinho's merch - because Chelsea still own the trademark rights. But it didn't stop Manchester United
Shomurodov is close to moving from Rostov to Genoa for 8 million euros (Sport Italia)
Pobegalov about 12 cases of covid in Shinnik: I hope we can start training by October 4
Source https://www.theage.com.au/business/markets/morally-obscene-sanders-wants-to-tax-billionaires-gains-in-the-pandemic-20200806-p55j8y.html?ref=rss&utm_medium=rss&utm_source=rss_feed