Michael Hibberd reckoned his elder brother Geoff was the kind of character who usually extricated himself from vexed situations.

So when Michael Hibberd's sister Carly called the Demon defender about 11pm on Sunday, April 5, to say that Geoff and a friend, Jason De Silva, had gone missing after leaving Flinders Pier before 6am on a fishing trip, the family still held hope that the affable Geoff, a plasterer from Balnarring, would be okay.

But Michael had been fishing in those waters before, knew how rough the seas could be and that his brother had been in a two-metre "tinny" aluminium boat. The swells, Michael later said, were "ridiculous, like five metres overnight". 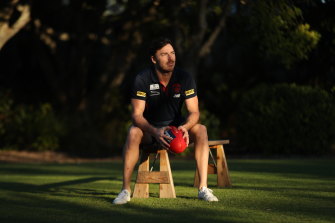 Michael Hibberd at Melbourne's hub in Queensland this week.Credit:Matthew Goodrope

So, the footballer was not optimistic about the chances that his brother - the "No. 1 fan" who had told Michael he'd still make the AFL when Michael doubted he'd get drafted - would reappear.

"She [Carly] said the car's still there, but no boat. No one's heard from them. Their phones are off. I was like, straight away I was, 'Shit, this is no good.'

"Everyone's like, 'Yeah no, he's probably...' With my brother, he has a way of getting out of any situation. He's a character. Anyway, everyone's like, 'It's Geoff, he'll come back' kind of thing.

"I've been out in those waters before fishing, especially when it's rough and you know, be out there in a tinny that was only two metres big, so yeah I was pretty real about it straight away, barely got a wink of sleep and then went straight down to the pier the next day."

Someone suggested to Hibberd that his brother's boat might have docked at Hastings. So, the ex-Essendon and now veteran Melbourne defender called the police to check.

"The police rang me and they found the boat at Pyramid Rocks [Phillip Island], smashed up against the rocks with no sign of them. I think that was, that was - if it wasn't already real then, for me, which it kind of was, it was for my family you know - and then the next few days were rough on everyone."

Michael Hibberd was quick to accept that his brother, just 33 and father of eight-year-old Indie, was deceased. He had taken over dealing with the police and informing the family, largely to shield his parents.

"Once everything kind of settled down, I was like, 'Well, I haven't really looked after myself as much here' ... But yeah, going really well now, everyone's going as well as you can be, I guess."

Hibberd's grief, thus, was initially tempered or obstructed by the need to comfort others and manage matters. He would be comforted, too, by the Melbourne Football Club.

Geoff had fished "nearly every day", according to Hibberd, and liked to hang around close to shore and snare squid. "Him and his mate just got a bit keen," Hibberd said.

As the weeks passed, Hibberd wondered about what had happened to Geoff and De Silva, who was just 20. He would go down to the Flinders Pier on days of high seas, in an attempt to comprehend what had transpired.

"And I've been down several times on rough days just to get my head around what it might have been like. I'll go down there sometimes and I've been down and around the shore it's not too bad, but then as soon as you get 100 metres out, it's pretty vicious. So maybe because it was dark when they went out, who knows? It's all speculation.

"I've been down, it's been a few times now. But especially after a month or whatever, I would pick a day when it was rough, just to go down and figure out what it might have looked like."

For several weeks, Hibberd has been ensconced in Maroochydore in Melbourne's hub, where his wife Anthea, 13 weeks pregnant, has joined him. He says he's dealt with the worst of the grief, though "you have your good days and your bad days".

"Now I can actually confidently say, like, apart from the days, some days I do think about him a bit more - I can confidently say I'm good and travelling well, and that the major part of the grief is gone. And I can talk about it without getting too emotional."

Hibberd says he talks to Indie, his niece, whenever he can. "I think it's taken her a while to actually talk about him, but now she's starting to a bit, in a good way," he said.

OFFICIALLY, Geoffrey Hibberd has not been declared dead.

"I was pretty realistic about the whole thing early and now I think everyone's dealt with that," Hibberd explained. "They understand, they understand he's not out there swimming still. Like it's, sad as it is, it's not the case."

And, in another COVID-19 complication, the family have not been able to commemorate his life with a funeral yet.

"That's been something that's been pretty tough. We're still, there's a part of us that wants to just wait until COVID settles down, we can have a proper celebration," he said.

"And, you know, you kind of want that, the coroner to go, 'Yeah, he's been pronounced dead'. We don't know how long that will be. We'll deal with that when they do. They may not say that for a long time. It could be another year or two years, who knows?

"But if COVID stuff settles down and we can actually have a proper gathering of over 100 people, we'll just do it off our own bat."

Michael had lived with Geoff before the younger brother was drafted, straight out of Frankston in the VFL, in the pre-season draft of 2010-11. Hibberd's half-brother, Mark, the eldest sibling and a fellow fisherman, lives in Darwin.

Geoff kept telling Michael he'd get drafted when the then VFL defender's faith wavered. "Brother was always the one going, 'No, no, you're next year, you're next year. I don't know why you haven't already.'" 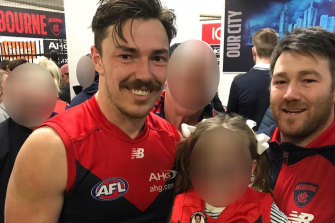 Michael Hibberd with his brother Geoffrey.Credit:Facebook

"He was a real character - life of the party, just a real loyal friend, I guess," he said.

"Definitely a lad, yeah. He'd make anyone laugh ... He'd just try and make people laugh and half the time he'd get in trouble doing it but if you made someone laugh, he didn't care.

"I'm at peace with what's happened. You know, when someone passes you always have a little bit of regret - the last few times we were in contact we were probably blueing a little bit at the time when he passed. But in terms of the grief and him gone, we understand he's gone and there's full closure there for everyone.

"Me and him, you know, brothers, brothers get feisty towards each other. But with anyone else he had a heart of gold ... he was very likeable, very loyal."

ASIDE from not being selected for round two, following the months-long delay, Hibberd's on-field form has been, in his word, "solid", in the face of the twin challenges of a family tragedy and COVID-19.

"I feel like, especially early, it was like a motivation for me. Something Geoff and I would always do growing up was always footy ... I definitely wouldn't be where I am without him, you know, he toughened me up."

Geoff had played local footy on the Peninsula. "Just a handy half-forward ... he played everywhere... He'd go anywhere for coin," he said.

Teammates, the coach and club psych have helped Hibberd cope. "The support early from everyone was unreal," he said.

"When things are tough, you always go back to your mates and your teammates. The support was there from Goody [coach Simon Goodwin] from the start."

Goodwin gave him a new role this year, as a deeper defender, on the last line, where he'd negate the likes of Dustin Martin - rather than playing his customary role: running rebounder. Come the lockdown, Hibberd was a lockdown defender. "It's probably the biggest strength in my game is one-on-ones and winning marking contests, or at least halving them," he said.

Hibberd was among the Essendon contingent who were suspended by the Court of Arbitration for Sport for the duration of 2016, when he went to Europe with close mate Michael Hurley, caught up with Cale Hooker and Tom Bellchambers and - alone of that group - ran with the bulls at Pamplona.

"I'd say this year [is harder], with what's happened to Geoff, no respite, not being able to live a normal life," said Hibberd, comparing the smaller trauma of 2016 to 2020. Wistful in Queensland, he notes that Melbourne life would afford even fewer freedoms.

Hibberd has been unable to see his parents, sister and niece while hubbing in Queensland. Dad, 65, who lives in Cranbourne, suffers from diabetes, while his mother, 58, is in Somerville, where he and Geoff were raised.

"It is difficult being away from family, especially when they're doing it tough still but I just do whatever I can. These are the cards we've been dealt and I've been dealt, you know, everyone's up in this situation where they can't see anyone."

Pobegalov about 12 cases of covid in Shinnik: I hope we can start training by October 4
Kulchiy is likely to become an acting coach of Dynamo. They want to keep Novikov in the club's system
Due to covid, the Premier League season may be considered prematurely completed if the 2/3 and 3/4 rounds are completed
Bayern could give Nübel a loan deal if Ulreich stays at the club
Former Italy striker Pazzini is Interested in Spezia. He is 36
Cherevchenko about Khimki: we will work both tactically and physically. Need to tighten up the team
Milan have agreed a transfer of the forward Bude-Glimt Hauge for 5 million euros. He scored them in the Europa League
Source https://www.smh.com.au/sport/afl/my-brother-lost-at-sea-michael-hibberd-s-painful-story-20200813-p55ljr.html?ref=rss&utm_medium=rss&utm_source=rss_feed