New York: World No.2 Rafael Nadal confirmed on Tuesday that he will not defend his US Open crown this year at Flushing Meadows as organisers released the singles entry list for the grand slam.

Spain's Nadal had said in June that he had reservations about travelling to the US amid the COVID-19 pandemic and he joins women's world No.1 Ashleigh Barty in skipping the tournament due to COVID-19 concerns.

"After many thoughts I have decided not to play this year's US Open," Nadal said on Twitter. "The situation is very complicated worldwide, the COVID-19 cases are increasing, it looks like we still don't have control of it.

"We know that the reduced tennis calendar is barbaric this year after 4 months stopped with no play, I understand and thank (everyone) for the efforts they are putting in to make it happen. We have just seen the announcement of Madrid not being played this year.

"This is a decision I never wanted to take but I have decided to follow my heart this time and for the time being I rather not travel."

The Madrid Open, which was scheduled to take place from September 12-20, was cancelled on Tuesday due to the rise of COVID-19 cases in the Spanish capital. 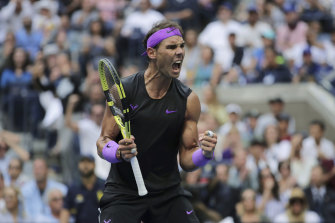 Rafael Nadal will not defend his Flushing Meadows crown due to coronavirus concerns.Credit:AP

The United States has the highest tally in the world with more than 4.7 million confirmed novel coronavirus cases and nearly 156,000 deaths.

World No.1 Novak Djokovic, a three-time champion in New York, headlines the men's list along with last year's runner-up Daniil Medvedev and other top 10 players including Dominic Thiem, Stefanos Tsitsipas and Alexander Zverev.

Swiss Roger Federer, a five-time US Open champion, will also be absent after the 38-year-old was forced to undergo knee surgery in June that prematurely ended his 2020 season.

Nine of the top 10 women's players, including 23-time grand slam champion Serena Williams and holder Bianca Andreescu, are on the entry list along with 2018 champion Naomi Osaka.

As many as 13 grand slam champions are in the women's draw including Romania's Simona Halep, the reigning Wimbledon champion and 2018 French Open winner, and this year's Australian Open champion American Sofia Kenin.

The United States Tennis Association (USTA) said eight additional wildcard entries would be selected in both the men's and women's fields.

Organisers said the seedings would be announced closer to the start of the tournament which is scheduled for August 31.

A number of players are also set to take part in the August 20-28 Western and Southern Open in New York, which serves as a warm-up event for the US Open.

Kolasinac will move to Bayer from Arsenal for 11 million euros + bonuses (Fabrizio Romano)
Dyer called the toilet the best player of the match between Tottenham and Chelsea
Ferencvaros will play in the Champions League group for the first time since 1995. This is the longest break between the first and second appearances
Jose Mourinho: what happened to Dyer is not normal, he was dehydrated. If the League management doesn't care about the players, I don't
Jose went berserk twice during the match with Chelsea: ran over Lampard and ran to look for Dyer - he rushed to the toilet right during the game
Lampard on relegation from the League Cup: we Need to keep a positive attitude. Everything will come if Chelsea score second, leading the score
Call of nature, what can you do? Dyer explained why he ran to the dressing room during the match with Chelsea
Source https://www.theage.com.au/sport/tennis/nadal-announces-he-will-skip-us-open-as-entries-announced-20200805-p55ilp.html?ref=rss&utm_medium=rss&utm_source=rss_feed

AFLW training to begin next week

Reading, writing and skating give the girls of Kabul more than hope

Ghost, alternative president, lawyer: Hillary is all over TV, again

Man in custody after sexual assault on Townsville footpath

Bennett gets nod as Queensland coach

'I have to reunite the club': Walters' first mission is to mend broken Broncos

Schoolies set to go ahead ‘unofficially’

Please Explain podcast: what have we learnt from Victoria's hotel quarantine inquiry?

Experts decide who won US debate

Trump, agent of chaos, drives first debate into a ditch

Star’s warning for her next boyfriend

Aussie only comp for 2021 more likely

Secret witnesses to testify about plot to 'kidnap or poison' Assange

The Trial of the Chicago 7 struggles to handle the truth

'Worst is yet to come': Legal services desperate for money ahead of domestic violence wave

Man in custody after hospital shooting

'Everything is going well': Health Minister travels to Pilbara for meetings over COVID-stricken ore carrier

The worst debate in modern American history: how hope was mugged in the Trump-Biden clash

'People died like flies': Spanish flu and the Exhibition Building

Patrick admits no medical shortages from wharf dispute - yet

From the Archives, 2000: A perfect party to end the world's greatest Games

Meghan insists she's being authentic in face of criticism, after losing court battle over biography

'There's a buzz': Selwood bullish about Geelong's chances against Port

As it happened: Silver lining for Opals, Cameroon shock Spain

We are women, you heard us roar. Vale Helen Reddy

Weekly testing looms for one in four workers in abattoirs, supermarkets

Disney lays off 28,000 as coronavirus slams its theme-park business