NSW Deputy Premier John Barilaro told his state Nationals colleagues he had personally voted for Labor ahead of the Liberals in last year's federal election, as a fresh round of Coalition infighting threatens to overrun the final days of the Eden-Monaro byelection.

Mr Barilaro, who had flirted with quitting state politics to contest the federal seat, on Thursday was forced to dismiss reports he and his Nationals supporters were again actively undermining the Liberals' bid to reclaim the marginal seat by urging them to give Labor their second preference. 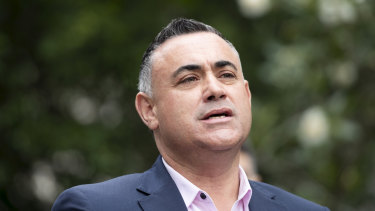 "We've got a how-to-vote card – you can't make it any clearer – where it says one (Nationals candidate) Trevor Hicks … two to the Liberal party, and then follow the card, or for all the voters in Eden-Monaro, to decide how they vote," he told reporters in Queanbeyan.

But the NSW Nationals leader further inflamed tensions by refusing to say if he voted for Labor ahead of the Liberals at the last election, when Liberal candidate Fiona Kotvojs contested the seat against Labor incumbent Mike Kelly.

The Sydney Morning Herald and The Age can reveal Mr Barilaro, who lives in the electorate, told his state Nationals colleagues he had in fact preferenced Labor above the Liberals after voting for then-Nationals candidate Sophie Wade.

MPs inside a state Nationals party room meeting held last year, speaking on condition of anonymity, say Mr Barilaro told them he had voted Nationals first, Labor second and Liberals third in Eden-Monaro, which the Liberals lost to Labor by just 0.8 per cent.

"One of those votes was John Barilaro's," said one Nationals MP.

"I think there was a bit of shock in the room, but nobody wants to pick that fight" the MP said. "Who knows who else he told to vote that way."

Another Nationals MP said they were surprised to hear Mr Barilaro's preference claim.

"I recall the instant in the party room and people were surprised about the comment, that's all I'll say," they said.

Dr Kotvojs is again representing the Liberals against Labor's Kristy McBain, while Queanbeyan-Palerang councillor Trevor Hicks is contesting the southern NSW seat for the Nationals.

"Every Australian respects the privacy of the ballot box in our great democracy."

Opposition Leader Anthony Albanese, who this week faced questions about the security of his position should Labor lose on Saturday, said the byelection was ending the way it began, "with the Liberals and Nationals fighting each other".

He said the contest was a test of Mr Morrison's leadership.

"John Barilaro just a year ago [was] saying he was glad that the Liberal candidate, Fiona Kotvojs, lost because of her personal attacks on Mike Kelly. And then, of course, condemning the Morrison government for not being honest about the cuts to the ABC," Mr Albanese told SBS.

"We've lost a popular sitting member in Mike Kelly ... we've had the mountain to climb in the circumstances of a coronavirus pandemic."

Prime Minister Scott Morrison said the NSW Nationals leader had given an "absolute statement of support" for their how-to-vote instructions.

"But what I would suggest is that you 'vote 1' Liberal for Fiona Kotvojs and that is the nature of this contest," he said.

Tom Rabe is Transport Reporter with The Sydney Morning Herald.

We found out how the fascinating logo of Iceland appeared: Game of thrones has nothing to do with it, the source of audacity is the success of the national team
Ronaldo-Casillas: Proud that we shared great moments
Bayern want to sell Boateng in the summer. The club has no offers yet
Solskjaer on the Europa League: a Trophy would be a big step forward for Manchester United. We want to win something
Juve have contacted Zidane, Pochettino, Inzaghi, Spalletti and Gasperini about working at the club. The Real Madrid coach refused
Coach Of Brentford: We went from a mid-level team to the third team of the season. This is an incredible achievement
Burnley are not going to sell Tarkowski for less than 50 million pounds
Source https://www.smh.com.au/politics/federal/nationals-mps-say-barilaro-personally-voted-for-labor-above-liberals-20200702-p558g9.html?ref=rss&utm_medium=rss&utm_source=rss_feed

When the surreal is everywhere, how do you make a nonsense film?