Group bookings at pubs will be reduced from 20 people to 10 and large venues will not be allowed to have more than 300 patrons under new COVID-19 rules to be introduced in NSW.

The Berejiklian government will announce the measures on Tuesday, which include stricter requirements for venues to collect contact details of patrons in case of an outbreak, and tougher rules on how pubs are cleaned. 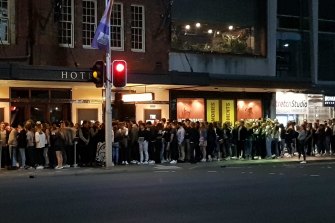 The line outside The Golden Sheaf in Double Bay last weekCredit:Reddit

The changes relate only to pubs and will not apply to clubs, restaurants or The Star casino, which was fined $5000 on Monday after inspectors were told of groups mingling and people standing together while drinking on Saturday night.

The new measures follow the outbreak at the Crossroads Hotel in Casula in Sydney's south-west which is now responsible for 21 coronavirus cases.

The decision to tighten the rules around pubs was made during a meeting of senior government ministers on Monday night. A senior NSW government source said the Australian Hotels Association had proactively approached the government with a list of proposed changes as they wanted to ensure pubs were safe.

"Full credit to the AHA, they came to the government with stronger steps they are prepared to take," the source said. " This isn't about the government being heavy-handed, it's about tightening existing restrictions."

Pubs in NSW were allowed to reopen in mid-May but with a limit of 10 people per group booking and with no more than 50 patrons at each venue.

Most recently group bookings of 20 people have been allowed and no restrictions placed on the number of people inside a pub provided a venue complies with an indoor limit of one person for every four square metres.

The changes to be announced on Tuesday will mean no more than 300 people will be allowed inside a pub no matter how large the venue is.

The Golden Sheaf, in Double Bay in Sydney's east, was fined $5000 last Friday after images of long queues forming outside the venue were shared on the internet.

Bale was not included in real's bid for the match with Manchester City in the Champions League
Arsenal have offered Willian a 3-year contract
Aurier agreed to move to Milan. Tottenham want 20 million euros for a defender
Can-Casillas: One of the greatest is leaving the stage. You have always been an example, my friend!
Atletico President: Simeone is great. He constantly brings victories and titles
Bayern goalkeeper Fruchtl can go on loan to Nuremberg
Liverpool can buy Norwich defender Lewis for 10 million pounds as a competitor for Robertson
Source https://www.smh.com.au/national/nsw/nsw-reintroduces-tougher-restrictions-for-pubs-following-virus-outbreak-20200713-p55bps.html?ref=rss&utm_medium=rss&utm_source=rss_national