Stuart McIntosh maintains that if it weren't for the Sydney Olympics, he would never have ended up with his wife, Melissa, or their three children. 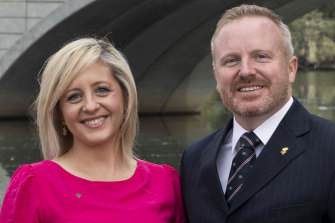 The member for Lindsay, Melissa McIntosh, with her husband Stuart.Credit:Dominic Lorrimer

The British kayaker first spotted the then aide for Australia's sports minister when he was in Penrith, training at the white-water stadium ahead of the Games.

After seeing each other at several pre-Olympics events, Stuart eventually bumped into Melissa in the street and invited her out for a coffee.

But when his training period came to an end, he had to return to England.

"There was only one spot [for slalom canoe] for the Olympic Games, so basically I needed to win that one spot, otherwise I was never going to be coming back," he told The Sydney Morning Herald.

Ms McIntosh interrupts: "I don't know that you told me that – that I might never see you again!" 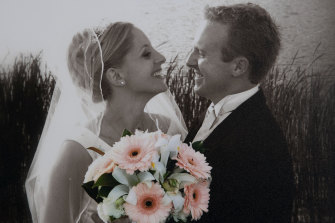 Mr McIntosh, at the time ranked third in the world for slalom canoe, did win the place and convinced the British team that "it was very, very vitally important that I came back immediately" to train at the AIS gym in Canberra – where Melissa had taken up a new job with then prime minister John Howard.

"I don't know what we would have done had I not won that place and come back," Mr McIntosh said. "We probably would have gone our separate ways."

Instead, their paths entwined.

The pair moved into a house in Emu Plains, much closer to the white-water stadium than the athletes' village in Homebush. It was along the route of the torch relay, and they hosted a barbecue with friends and other athletes to watch the sacred flame go past.

"It was such a different time, such an exciting time, of people just joining together and the community spirit," Mrs McIntosh said, recalling how families in Penrith opened their homes to host international visitors and athletes.

"Everyone worked really well together in your sport. It was such a family, really – competitive, but very much a family atmosphere."

Mr McIntosh made it into the finals for his event, but finished eighth.

He recalled the awesome atmosphere at the Sydney white-water course, built in a U-shape instead of the usual natural straight river section. That allowed for stands to accommodate 15,000 people at the venue.

"I distinctly remember coming down to the main section and absolutely nailing the double-up there and the crowd really, really cheered. Just that feeling, that noise – I mean, if you're in a stadium watching the NRL or any of those other Olympic events, you are prepared, you're ready for it. But I certainly wasn't prepared for that," he said.

"The whole experience of the Olympics was really, really good, and then having Melissa in the stands as well was, yeah, it was a very, very special time."

Mrs McIntosh says watching the final was nerve-wracking – and unusual, since she had been barracking for the Australian team yet here she was, cheering on her British boyfriend.

"You watch every tiny little part of it, holding your breath as they go through the gates and hoping he doesn't hit a gate or flip upside down," she remembered.

Once the Games were finished, Mr McIntosh skipped his flight home, declined an invitation to meet the Queen and went on a holiday with his new love.

Throughout the remainder of his sporting career the young family travelled the world together. They estimate their oldest son had visited 20 countries before turning one.

Now the tables have turned, with Mrs McIntosh re-entering politics and winning the seat of Lindsay for the Liberals at the 2019 federal election, while her husband takes on the supporting role.

"I didn't win the Olympics but I did win overall. I've got a beautiful wife and three great kids," he said. "I'll take that Olympic legacy over a medal any day."

Katina Curtis is a political reporter for The Sydney Morning Herald and The Age, based at Parliament House in Canberra.

Sandro Tonali: Milan on the crest of a wave. The Rossoneri shirt is pressing, but I'm getting in shape
Kadyrov's adviser hit the judge in the groin, and his son was dismissed from Akhmat and banned for three years. At first they all denied
AEK Carrera lost both matches in the Europa League with a total score of 1:5
Stefano Pioli: Milan have not achieved anything yet. The season is long, we will face difficulties
Mourinho 0:1 with Antwerp: the Best team won and the worst team lost
Bale did not make a performance in his first three games for Tottenham. He hasn't scored since January
Father Courtois: Keylor Navas was not a good teammate. When he left for PSG, everything became easier
Source https://www.theage.com.au/politics/federal/olympic-love-a-better-legacy-than-a-medal-any-day-20200919-p55x7e.html?ref=rss&utm_medium=rss&utm_source=rss_feed