Australia's top agriculture bodies are moving ahead of the federal government on climate policy to shore up their lucrative export interests as China's new zero-emissions target creates fresh tensions in high-level trade negotiations.

On Wednesday, European Union and Australian chief negotiators discussed the climate chapters of a $85-billion free-trade deal. Minutes of the meeting show the EU said climate was a key issue and it would work with Australia on its commitments to the Paris agreement. 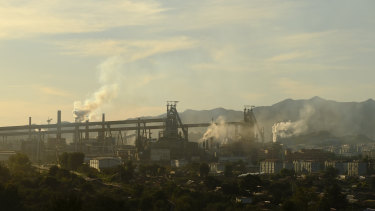 China has announced a target of net zero emissions by 2060. Credit:Sanghee Liu

The EU said it was considering a carbon border tax for high-emissions exports. Australia is expected to reject any attempt to make such a levy part of the free-trade deal. Its negotiators have pushed for climate to be separated from trade outcomes in the deal.

"Australia is watching the development of a potential carbon border adjustment proposal closely, including World Trade Organisation consistency, and will engage where appropriate with any EU processes," he said.

"Our commitment to meeting our Paris targets is firm and resolute. We are getting on with the job [...] and are willing to restate our commitments to anyone who wants to discuss it."

But in a sign Australia's major exporters are moving ahead of government policy, grains and oilseeds – the largest food export industry – is developing its own ambitious climate goals so it can "shape its own destiny".

"The market is already there," said David McKeon, chief executive of the national industry representative GrainGrowers.

"Look at the major international farm input providers, like chemicals and other products — they're setting their own climate targets.

"For Australian businesses to operate with confidence we need clarity from the government on issues like climate change."

The grains and oilseeds industry makes up 25 per cent of Australia's total agriculture exports, delivering around $9 billion in farm gate revenue. GrainGrowers represents farmers who typically back conservative political parties.

Mr McKeon said buyers of Australian grain were looking at sourcing "a great proportion of their product" from producers who have net zero emissions within the next 10 years.

GrainGrowers has endorsed the National Farmers' Federation target for net zero emissions by 2050 and committed to developing a grain specific target for 2030 within the next 18 months. The red meat sector set a goal in 2017 to reach net-zero by 2030.

"In some key trading markets, for example the EU, commitments to biodiversity and emissions reduction and environmental protection are already shaping up to be ‘permission to play' and can and are being used as a barrier to market access," Mr Salardini said.

France's ambassador to Australia, Christophe Penot, said last year that the EU would not demand dramatic new climate change targets in return for a new trade deal. EU ambassador Michael Pulch told The Australian in December that "in general terms, we are on the same wavelength" on climate change.

In July, the EU's statistics agency found the 27-nation bloc might not achieve its own target of cutting pollution by 40 per cent by 2030.

On Wednesday, Australia's former top climate diplomat, Howard Bamsey, said China's zero-emissions target was a game changer, because the world's largest polluter would push other countries to rethink their ambitions.

German Chancellor Angela Merkel praised China's commitment to go carbon neutral by 2060 as the European leaders prepare to meet for a two-day special summit on China. The meetings are expected to tackle how to manage rising concerns about the country's human rights record while maintaining economic cooperation.

"These targets really are ambitious and they should provide an inspiration for us in Europe as well, to live up to our promises," she said. "I think it's not in dispute when it comes to climate, we need to work with China – it is the largest emitter worldwide."

Prime Minister Scott Morrison has refused to commit to a zero-emissions target by 2050, pledging instead to achieve the goal by the second half of this century.

"We are committed to investing in the technology which reduces emissions in this country," he said on September 20. "Those things are achievable with the right investments in the right technology."

Mike is the climate and energy correspondent for The Age and The Sydney Morning Herald.

Holand scored 11 goals in 9 matches in the Champions League
Lucescu on the Juventus defeat: Maybe 0:2 is a lot for such a match. We played very well
Pique may miss the match with Juventus due to removal in the game with Ferencvaros
Gnabry contracted the coronavirus. Bayern play Atletico tomorrow
Fati is the first in the history of the Champions League to score 2 goals under the age of 18
Messi scored in the 16th consecutive Champions League season and repeated Giggs' record
Bruno did not score a PSG penalty at the first attempt, but the referee asked for an Interruption due to Navas' exit from the goal line
Source https://www.smh.com.au/world/asia/our-own-targets-businesses-press-ahead-as-china-pushes-zero-emissions-20201001-p5610c.html?ref=rss&utm_medium=rss&utm_source=rss_feed