NSW Premier Gladys Berejiklian approved, and her office was preparing to announce, a raft of council grants from a fund days before a change in guidelines allowing the money to be distributed was approved.

The same day the Stronger Communities Fund was officially broadened so all councils affected by amalgamations could benefit, the senior bureaucrat in charge of administering the fund phoned Hornsby Shire Council to offer it $90 million. 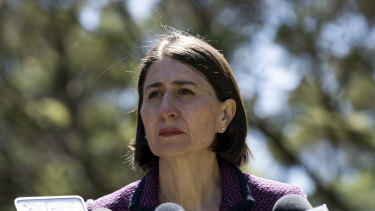 The guidelines for the council grants fund, initially only for councils which merged in 2016, were officially altered on June 27, 2018, allowing more than $100 million to flow to non-amalgamated councils in Liberal seats in the lead-up to the state election.

The fund is now the subject of a pork barrelling inquiry.

On Thursday the government took the unusual step of releasing cabinet documents to the Upper House showing the change in guidelines was signed by Ms Berejiklian, Deputy Premier John Barliaro and then local government minister Gabrielle Upton.

Greens MLC David Shoebridge, who is chairing the inquiry into the grants, said this was the first time Parliament had seen the Premier's signature on any documents associated with the $252 million scheme.

"There has been a desperate effort by the government to hide the Premier's involvement and there is little wonder because this is the largest pork barrel scheme in the country, more than double the scale of the federal sports rorts," Mr Shoebridge said.

A NSW government spokesperson said: "There are appropriate departmental records with respect to the approval of each grant, and these have already been provided to the Parliament."

Emails released under the Upper House's "call for papers" powers show Ms Berejiklian approved money going to Randwick, Canada Bay, Ryde and Waverley councils, none of which had merged, on June 25. 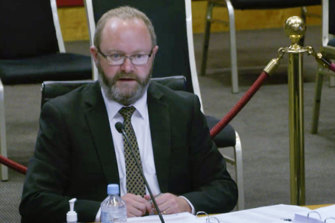 Office of Local Government CEO Tim Hurst before a parliamentary inquiry.Credit:Parliament of NSW

A senior adviser of the Premier's then asked Office of Local Government head Tim Hurst to prepare media releases for the relevant Liberal MPs.

The parliamentary inquiry into the integrity of the state government's grant schemes, of which the Stronger Communities Fund is a key focus, heard Mr Hurst directly contacted Hornsby Shire general manager Steven Head to both make him aware of the fund and offer the council $90 million.

The inquiry heard Mr Hurst contacted Mr Head the following day to say the money had been arranged.

“The Premier approved the grants, the guidelines were then finalised, then Hornsby Council were told they had won the grant if they could submit a grant application," Mr Graham said.

During the inquiry Mr Shoebridge put to Mr Head: “You actually found out about the opportunity and the fact that you’d won the prize all in the same interaction," to which he replied, “exactly”.

While Hornsby was not the subject of a merger, the council has repeatedly said it had been bruised by the amalgamation process.

Mr Graham said during the inquiry Mr Hurst had used the refreshed guidelines "almost immediately": "Signed off on the 27th of June; we've had evidence this morning from Hornsby that you were straight on the phone and on the email at 5pm that day to give them the good news."

He put to Mr Hurst the whole process for Hornsby was "wrapped up in less than 24 hours".

"I think is an excellent example of us being responsive and being able to turn around these applications in a way that councils have been asking for," Mr Hurst replied.

In a motion brought by Mr Graham on Thursday, the Legislative Council censured the Leader of the Government in the Upper House, Don Harwin, for failing to produce the briefs for projects signed by the Premier and Deputy Premier. 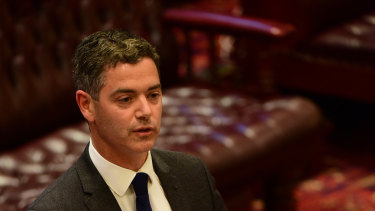 In response to a previous request to do so, the government last week said the delegated authority to approve the briefs for the allocation of funds rested with Mr Hurst.

But Mr Hurst told the inquiry he didn't approve the grants, and he'd never seen any signed paperwork from the Premier and Deputy Premier despite acting at their behest, in an admission Mr Graham described as "extraordinary".

In response to the censure motion, Mr Harwin said he was informed the documents sought didn't exist and was assured of this by the Department of Premier and Cabinet.

Mr Shoebridge said that if that was all the documentation that existed, "there has been an extraordinary case of maladministration".

"If that's really the government's defence ... there is a deeper, darker problem than just this censure motion," he said.

Hans-Dieter flick: I Hope Alaba will sign a contract with Bayern. Our club is one of the best in the world
Diego Maradona: Messi gave Barca everything, brought them to the top. He was not treated the way he deserved
Federico Chiesa: I hope to leave my mark in Juve. We will achieve great results
The Coach Of Benfica: I don't want us to look like the current Barcelona, it has nothing
Guardiola on returning to Barca: I'm happy at Manchester City. I hope to stay here
Fabinho will not play with West ham due to injury
Ronald Koeman: Maradona was the best in his time. Now the best Messi
Source https://www.theage.com.au/national/nsw/premier-approved-controversial-grants-before-councils-knew-they-could-apply-20200923-p55ykd.html?ref=rss&utm_medium=rss&utm_source=rss_feed

Ronaldo recovers from virus and is back for Juventus

Spotting a Manolo from a no-no: the case of the alleged counterfeit heels

Pope Francis: 'People are taking risks on my behalf' to fight corruption

When is the Melbourne Cup field announced?

Why the Queensland election matters beyond the state's borders

Just one new case in Victoria

Qld decides: Where to cast your vote

Manhunt for driver after wild crash

All Blacks smell blood as Wallabies unleash Generation Next

'Don't take anything for granted': Trump, Biden battle for the Mid West

Democracy sausage: Here's where to get yours

‘Perfect set up’: Coast in line for severe thunderstorms

Scott Hillier’s top tips how to bag a muddie

Noosa’s Satanic Mass goes ahead against all Gods