Skip to sections navigationSkip to contentSkip to footer

A rider has been airlifted to Royal Perth Hospital after a serious crash on Toodyay Road near the Wheatbelt town of Morangup on Saturday morning.

Emergency crews were called to the scene just before 10.45am, with Volunteer Fire and Rescue Services firefighters from Wundowie and Toodyay also assisting. 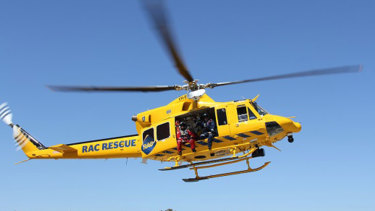 The RAC helicopter has been called to the scene. Credit:DFES

The RAC Rescue helicopter was dispatched to Toodyay Road just before 12pm to take the man to RPH for treatment.

The extent of his injuries is unknown.

The news comes less than 24 hours after two people were taken to hospital after a hiking accident north of Perth.

At around 2pm on Friday, a teenager was hiking at the Bells Rapids Park when he slipped and fell down a ravine and suffered head and arm injuries, prompting a major two-hour rescue operation.

A medical volunteer who was assisting with the rescue was also injured during the rescue.

Both men were taken to hospital for treatment, where the teenager remains in serious condition.

Massimiliano Allegri: I am Looking for a project that will have ambitions to win
Simone Inzaghi on the scudetto fight: Lazio looks only at itself
Ntombela and Mourinho do not communicate for two weeks. Then the player told the coach that he wanted to leave Tottenham
The ex-Real Madrid player helps develop artificial intelligence in football. This feature is useful for a coach, sports Director, and doctor at the same time
The 16-year-old striker Sherki has extended his contract with Lyon until 2023. Real Madrid and Manchester United are Interested in him
Eric Dyer: Mourinho knows how to light a fire inside players
Blanc is a priority option for Valencia. In the list of candidates, Marko Silva and Quique Flores
Source https://www.smh.com.au/national/western-australia/rescue-chopper-dispatched-to-serious-wheatbelt-motorbike-crash-20190720-p5292e.html?ref=rss&utm_medium=rss&utm_source=rss_feed