Richmond heading into orbit as Lynch and Riewoldt roar past Power

Fifty years to the day since the moon landing, Richmond notched one regulation win to their tally, that should send one giant shiver down the spines of their premiership rivals.

The Tigers further dented Port Adelaide’s finals chances at the MCG on Saturday, while themselves closing to within striking distance of the top four.

But this sunny winter afternoon might ultimately be best remembered for being the first time Richmond breathed fire through both mouths of their two-headed monster. 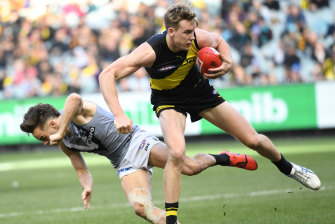 Tom Lynch of the Tigers and Power's Karl Amon contest the ball.Credit:AAP

Because of Jack Riewoldt’s wretched run with injury this year, this was just the fifth time that he’d played alongside Tom Lynch. They had never both been multiple goalkickers on the same side. That changed on Saturday, as Port’s no-frills but generally effective backmen were left in the dust by Richmond’s answer to Neil Armstrong and Buzz Aldrin, as well as a useful support crew.

Lynch was in ominous touch from the early minutes, while in his second game back from a knee injury, Riewoldt worked into the contest and had three majors by half-time.

With a midfield more than holding its own, Richmond won every quarter, playing a high-octane handball-oriented style of game. Occasionally they lapsed, allowing Port to hang just within striking distance until late in the third quarter, but for the most part Damien Hardwick’s side were in control all the way.

It was Lynch who provided a moment that encapsulated the difference between the sides, fending off Power backman Tom Clurey to snap brilliantly for his third major early in the final quarter. Lynch kicked 3.4 in the end, while Riewoldt finished with 3.1. Scarily, there is plenty of scope for improvement.

Quirkily it was the Tigers' first win against Port at the venue for more than 21 years. The Power's sequence of alternating wins and losses, which had dated back to round eight, finally came to an end, but not in the fashion coach Ken Hinkley would have hoped. Their season looks like going the way of Apollo 13. Richmond though, are heading into orbit.

Punching out of his division

Football can be a game of centimetres, and this was certainly the case for Port Adelaide veteran Justin Westhoff late in the first quarter. Power co-captain Tom Jonas cleared the ball from his defensive towards the boundary line at half-back.

He didn’t execute as hoped, with the ball drifting fractionally over the line. Westhoff had to judge whether the ball would sail out of bounds. He planted a heavy fist to the ball a split-second after it had gone past the line, sending the footy to the fence.

Umpire Ray Chamberlain wasn’t copping Westhoff’s effort, pinging him for deliberately punching the ball away. Westhoff paid a heavy price for being only fractionally late to the ball, with Jack Graham rewarded with a 50-metre penalty, from which the Tigers youngster duly converted.

It was a popular enough free kick with the partisan Richmond home crowd, but some of the Twitterati weren’t too impressed, especially given it was the polarising Chamberlain who made the decision. Injured Essendon star Michael Hurley asked “Can someone please explain what rule Westhoff broke? How was that a 50m penalty?”

Port were at least on the right side of another deliberate deliberation during the second quarter, when Hamish Hartlett’s handball to the boundary line in the back pocket was given the green light, much to the initial dismay of Riewoldt, who believed it should have been a free to the Tigers rather than a throw-in. 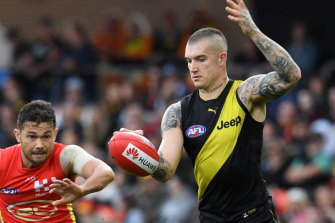 Richmond's Dustin Martin was in fine form against Port.Credit:AAP

Port midfielder Xavier Duursma has made an impression during his first season in the AFL, not least for his bow and arrow goal celebration. The Victorian slotted a set shot from the pocket midway through the third quarter, and duly fired off an invisible arrow into the crowd, as he had done earlier in the year.

But while the Adelaide Oval crowd may have been appreciative of Duursma’s theatrics, the Tiger faithful weren’t so charmed by the teenager. When the celebration was re-played on the big screen, a round of boos were delivered Duursma’s way.

Inter will extend their contracts with Handanovic and D'ambrosio until 2022
Pep Guardiola: I would have stayed at Manchester City and in League 2
Manchester United is ready to sell Alexis, Lingard, Smalling, Dalot, Jones and Rojo
Frank Lampard: I expect more from Chelsea, but now the result is most important
Atalanta does not lose 15 matches in a row – 13 wins and 2 draws
Lorient threw one newcomer off a plane and sent another under the water-all for the sake of presentations on social networks
Pasalic scored a hat-trick in the match against Brescia. Atalanta smashes the opponent 6:1
Source https://www.theage.com.au/sport/afl/richmond-heading-into-orbit-as-lynch-and-riewoldt-roar-past-power-20190720-p5293f.html?ref=rss&utm_medium=rss&utm_source=rss_feed

Department of Foreign Affairs and Trade to slash dozens of jobs

Eliminating COVID is a false hope, but 'aggressive suppression' is working

Pucovski targeting baggy green in 'next couple of years'

How rebel MPs, and Trump, forced Boris Johnson into a Huawei backflip

AFL to move all Victorian clubs to Queensland to save season

The Brisbane school so overcrowded its playground time is rostered

McKenna a chance to take on Bulldogs

W-League at risk of becoming fourth-choice competition for Matildas

'I value diversity and my team is reflective of that': Eddie Jones

From the Archives, 1914: First airmail service connects Melbourne to Sydney

MMA champ stabbed to death at own party