Only in the deepest crisis would a $2 billion policy seem too small to prevent a new generation of jobless and unskilled Australians going into life with lower incomes and precarious work.

Yet the pandemic recession is now so grim that a significant skills package is still not enough to save all the training places lost already or about to be destroyed. 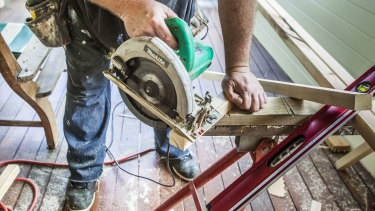 The recession could lead to the loss of up to 35,000 new apprenticeship jobs.Credit:Glenn Hunt

Scott Morrison won praise on Thursday for the new package and its flagship JobTrainer scheme to reskill people who are thrown out of work. Business groups backed it, the unions called it a "good start" and trainers welcomed the big investment.

Even so, the government's own numbers show the scale of the challenge. The government acknowledged that 16,000 apprentices have been suspended or cancelled since the pandemic began. That is just one sign of how hard it will be for willing workers to retrain.

The two components of the plan, a $500 million outlay on new courses and a $1.5 billion wage subsidy for existing apprentices, will not be enough to turn this around.

As a construction project, the shed looks promising. The home is yet to come.

So far, there is not enough shelter for the youngest Australians who need the most help – those who will leave school in December or have left in recent years and are still considering what to do with their lives.

These people face the toughest job market in generations, a university pathway with a sudden increase in fees for the humanities and real doubts about whether employers will be able to take on new apprentices.

About 250,000 people leave school each year and more than 40 per cent choose university. (It can be as high as 60 per cent, depending upon the age at which this is measured.) About 12 per cent choose apprenticeships and traineeships.

While the $1.5 billion wage subsidy for apprentices helps those at work today, it only goes to those who were in training on July 1 – and therefore offers no certainty for those who want to embark on an apprenticeship in the months ahead.

For all the attention on university degrees, these apprenticeships matter. Australia needs chefs, plumbers, carpenters, electricians, mechanics, bricklayers, tilers and painters. Hairdressers, too. Remember the outcry when Morrison limited haircuts to 30 minutes?

Cold Chisel had the right phrase for many Australians today – the "out-of-workers". The government suggests they make up 13.3 per cent of the labour force, or about 1.7 million people, when those who are jobless are added to those who are on JobKeeper but not working any hours.

Giving all workers a chance to retrain is crucial. But it is hugely important to find a pathway for those who are younger and who could lose a chance to train in the first place.

"If people are disengaging, and they don't make that transition from school effectively, the result is associated with terrible outcomes," says Mitchell Institute education policy fellow Peter Hurley.

Past research reveals those outcomes: unemployment, lower incomes for life, precarious work, and greater health problems. Hurley says this makes the case for more support for school-leavers, and in fact anyone in the younger cohort thinking of an apprenticeship.

"You're better off investing in them now because otherwise it is going to cost you more in the long run anyway," he says.

The pathway for these employers is starting to emerge. While some are using JobKeeper to pay their apprentices, they are likely to lose this option and have to fall back on the Supporting Apprentices and Trainees subsidy after September.

This could be a pay cut for any apprentice on JobKeeper, which is worth $9,000 per quarter compared to the $7,000 cap on the SAT subsidy. (Employers cannot get both for the same worker.)

The silver lining is that the SAT will continue to March next year. It is the first of the stimulus measures to be extended in this way – a hint, perhaps, of the new timeline for assistance in the economic statement to come on Thursday next week.

The pathway for others remains dark until those details emerge. One thing is certain: with the recession biting, Morrison has stepped away from his "snap back" language about ending JobKeeper in September. It makes political and economic sense to continue the help in some form.

While the "safety net" is an abstract thing for many people, JobKeeper is real. Millions of people are on it and millions more know someone it has saved. For all the eye-rolling about Morrison's marketing, it is a powerful brand he should not want to lose.

Yet the help for apprentices needs more work, too. The subsidy is worth 50 per cent of a salary but the cap on the payment works out to be about $538 per week, which is lower than Newstart prior to the pandemic. And it offers nothing for those who are not apprentices already.

There is a good argument to be more generous with the subsidy and lift it above 50 per cent in order to save more skills.

There is also a good argument to offer an incentive for new apprentices. The National Australian Apprenticeship Association has suggested a payment of $500 a week for first-year apprentices who start over the next year. The Australian Industry Group has a similar proposal.

Without help, the association says, we could have 100,000 young people who miss out on an apprenticeship and end up with no job and no skill. It would be a bleak future.

Buffon-Pirlo: Now I have to call you mister!? Good Luck, Andrea
Insigne is the first Italian to score for real at the Bernabeu and Barca at the camp Nou
All 11 Barca players touched the ball before Messi's goal against Napoli
Cakir cancelled out Messi's goal and awarded penalties to Barca and Napoli
Messi has been scoring in the Champions League for 16 years. Raul did this for 17 years
The second goal of Barca is pure magic of Messi: lying down (!) scratched the ball in the fight with 3 defenders and hit the far one
Messi scored the 27th goal in the matches of the 1/8 final of the Champions League. Ronaldo has 2 goals less
Source https://www.theage.com.au/national/skills-package-won-t-go-nearly-far-enough-20200716-p55cq5.html?ref=rss&utm_medium=rss&utm_source=rss_feed

'He gets his job done': Knights shift already a Green pasture after demolition of Tigers