Premier League leaders Everton slumped to their first defeat of the season and lost Lucas Digne to a second-half red card as Danny Ings inspired Southampton to a 2-0 win at St Mary's on Sunday.

Ings is Southampton's top scorer this season but he turned provider against Everton, setting up James Ward-Prowse's 27th-minute opener with a delicate through-ball and then crossing to the far post for strike partner Che Adams to score a deflected finish in the 35th. 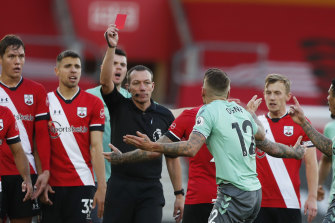 Everton's worst display of the season was capped by the 71st-minute sending-off of left back Digne, who raked his studs down the back of Kyle Walker-Peters' leg as he chased after the Southampton right back.

Everton, who won their first four league games and drew their fifth against Liverpool last weekend, stayed top of the standings. However, only goal difference separates Everton from Merseyside rival Liverpool.

It was a first loss for Carlo Ancelotti's team in nine games in all competitions and the visitors really missed the pace and directness of left-sided Richarlison, who was suspended after getting sent off against Liverpool.

Southampton have recovered superbly from losing 5-2 at home to Tottenham in their second league game, picking up 10 points from a possible 12 in their next four games and keeping three clean sheets in the process.

Elsewhere, Leicester City won at Arsenal for the first time in 47 years, with substitute Jamie Vardy's late close-range header enough to secure victory in the Premier League at the Emirates.

The win lifted Brendan Rogers' side to fourth on 12 points, while the Gunners stay in 10th place on nine after six games.

Arsenal were left ruing their failure to score in the first half hour when they pushed forward time and again, racking up 10 shots and six corners to Leicester's one and zero respectively.

They had the ball in the net from a corner in the fourth minute but replays showed at least three players offside as Alexandre Lacazette flicked it past keeper Kasper Schmeichel.

The hosts then almost scored when Kieran Tierney whipped in a cross that captain Pierre-Emerick Aubameyang headed over. 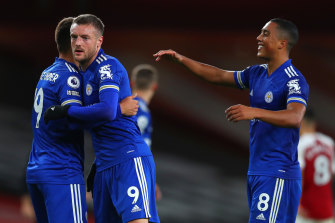 They went even closer to opening the scoring a few minutes later when Alexandre Lacazette, standing in front of goal, somehow nodded another cross from Tierney wide of the far post.

Vardy, who came on with half an hour to play having missed Leicester's previous two games with a calf injury, broke the deadlock in the 80th minute, heading home Cengiz Under's cross.

"We weathered a bit of a storm but then started getting into it and we've come away with a win. It's big for us but it's just the next game where we want to keep improving," said Vardy.

The win gets Leicester's season back on track following league defeats by Aston Villa and West Ham United.

Newcastle United's Jacob Murphy struck a clever free kick in the 89th minute to snatch a 1-1 draw at Wolverhampton Wanderers in a hard-fought Premier League encounter on Sunday.

After a frustrating afternoon of trying to break down Newcastle's defence, Raul Jimenez gave Wolves the lead in the 80th minute when he met a half-cleared free kick with a thunderous dipping shot from the edge of the area.

The hosts looked set to hold on for the win until Murphy caught out Wolves goalkeeper Rui Patricio by stepping up and curling the ball around the wall and in at the near post.

Bale has 200 career goals. He hasn't scored in European competition for 2 years
Fati became socio of Barca, but will not be able to vote in the next election
Jose Mourinho: some Tottenham players coming to visit LASK, Ludogorets, think they don't belong there
Pioli on 4:2 with Celtic: Milan did not lose their head at 0:2 and continued to play as a team
Messi will be at PSG next year. RMC Sport journalist on Barca forward
Suarez passed a negative test for coronavirus and will return to the General group of Atletico tomorrow
Chelsea are ready to sell Ruediger and Tomori in the winter. The German was Interested in Barcelona
Source https://www.theage.com.au/sport/soccer/southampton-surprise-league-leaders-everton-with-win-at-st-mary-s-20201026-p568hj.html?ref=rss&utm_medium=rss&utm_source=rss_feed

South Koreans in a pickle over China claim to kimchi

Cully's card: How does Australian rugby rate at the end of 2020?

'We have the gold standard': US and UK argue over vaccine nationalism

Don't pop the champagne just yet on Australia's economic recovery

Elliot Page coming out as trans isn't just about identity, it's about visibility

Starc back as record nears

'Last night was not OK': How a dancefloor decision landed an NRL star on trial for rape

What makes the perfect Twenty20 cricketer?

Speed freak Latham ready to turn it up to Eleven

NRL's hands are tied on de Belin, and so they should be

Beatlemania, a love language that stands the test of time

You only need two ingredients for cheating to occur, says Titus O'Reily

'Our main focus is on the Ashes': Root aiming for revenge in Australia

Trump throws one final curveball in his Beijing battle

People lining up for $80k-a-week rental

'This is not a hoax': Fauci pleads as Biden calls for 100 days in masks

Whatever Labor can do, the Liberals say they'll do cheaper

Mosques across France raided in fight against Islamic 'separatism'

The best, the worst and the thoroughly average Christmas albums of 2020

'This is not fake': Fauci pleads with Americans, says US faces 'crisis situation'

Danger lurks as Wall Street records barely cause a ripple

Ex-Aussie bowler gets another shot with Sixers

US, UK military teams to participate in Call of Duty tournament

Overwhelmed by choice? Let our critics be your guide this summer

US imposes visa curbs on members of Chinese Communist Party

Footage Shows the Moment of Receiver Collapse at Arecibo Observatory

I tried an at-home method of stretching my jeans. Here's how it went

Fireys unable to use Fraser Island water due to ‘cultural’ concerns

Fears for bats as Southeast set to swelter

Tycoon rents out Noosa mansion for $80k a week