Starbucks chairman Howard Schultz steps down - is a White House run next? 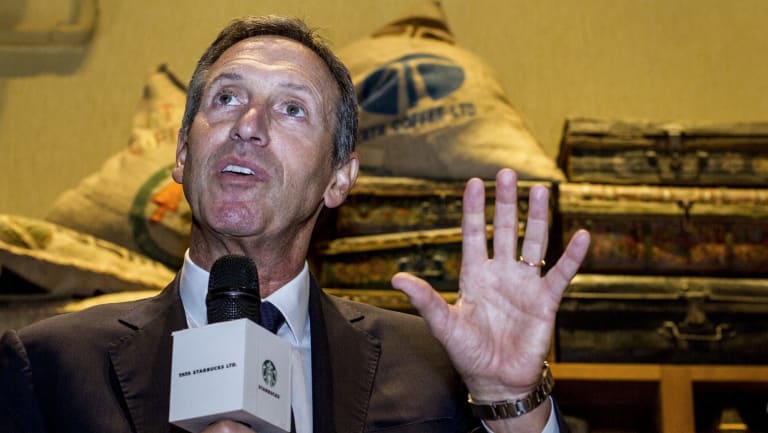 Starbucks CEO Howard Schultz may be eyeing a run at the White House.

Schultz, 64, who grew Starbucks from 11 stores to more than 28,000 stores in 77 countries during his time at the helm, will become chairman emeritus on June 26, the company said in a statement.

His departure comes as Starbucks struggles to continue growing sales in its home market. Chief Executive Officer Kevin Johnson has pointed to a weak afternoon business for hurting the company's results so far this year. The coffee chain also recently faced backlash after two black men were arrested at one of its Philadelphia cafes while waiting for a meeting to start. The chain closed about 8,000 company-owned stores for an afternoon of anti-bias training last week, a decision that some shareholders questioned for the expense.

His exit will likely fuel speculation he could be gearing up for a presidential bid. In a letter to employees announcing his exit, he said that he is "thinking about a range of options for myself, from philanthropy to public service, but I'm a long way from knowing what the future holds."

Starbucks shares fell as much as 2.8 per cent in late trading after the announcement. The stock has declined 0.6 per cent this year through Monday's close.

39-year-old belezoglu is the first player in the history of the Turkish championship to score in four decades
Watch your language when you talk about Florence. The poor are also robbed. Fiorentina fans responded to Ribery
Manchester United and Manchester City will compete for Coulibaly and Skrinjara
Juventus and Manchester City are the leaders in the fight for Adam Traore
Pep Guardiola: I Want Messi to stay in Barcelona
Kike Of Setian: Of course, we can win the championship. This is evidenced by facts and mathematics
Bartomeu on Messi: We have to renew the contract. Leo told me that he wants to finish his career at Barca
Source https://www.canberratimes.com.au/business/companies/starbucks-chairman-howard-schultz-steps-down-is-a-white-house-run-next-20180605-p4zjge.html?utm_medium=rss&utm_source=rss_feed