When her iPhone lit up on her desk on Tuesday morning, Premier Gladys Berejiklian had an inkling of what was to come.

It was Queensland Premier Annastacia Palaszczuk.

Outside of national cabinet, it would be the first time in weeks that the leaders would speak one-on-one, after months of tense stand-offs over the other's handling of the coronavirus pandemic. 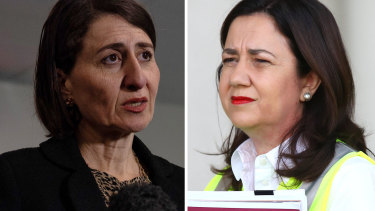 NSW Premier Gladys Berejiklian and Queensland Premier Annastacia Palaszczuk were at odds over the reopening of their states' border.

The call took all of a few minutes. On both sides it was said to be relaxed and pleasant.

But it was the quality, not quantity that mattered: the Queensland border to NSW and Victoria would open from December 1. For so many families, Christmas was back on for 2020.

"We know how tough this has been on families," Palaszczuk told the media moments after calling her NSW counterpart. "This is a great day. It's exciting news … Queensland is good to go." 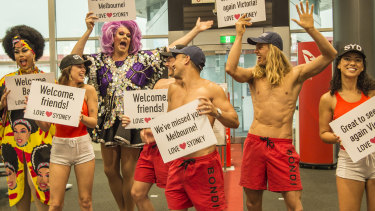 Lifeguards and drag queens greeted the flights from Victoria on Monday as the Victorian-NSW border reopened.Credit:Steven Siewert

The national wine sales manager met his toughest 2020 moment in late September, when he and his extended NSW family were unable to travel home to Queensland to mourn the death of his aunt.

"That's when it really sunk in, a time when you want to be with all of your family," he says.

It's not the only hard border Coorey has faced in 2020. Coorey's partner Grace remains in London, after her plans to move to Sydney in April were thwarted by the pandemic.

"We will stick it out as long as it takes to wait for each other," Coorey says. "We just deal with what's in front of us."

NSW marked 20 days without a single case of COVID-19 community transmission on Friday.

On Wednesday the Premier gave the green light to at-home outdoor gatherings of 50 people, and from December 14 businesses can recall employees to workplaces full-time. Slowly but surely, change is afoot.

In an important shift, small hospitality venues can host one person per two square metres indoors. The same rule is expected to be applied to larger venues of up to 500 people this week, pending final results from sewage testing in the Liverpool area where traces of COVID-19 were detected this week.

NSW Minister for Customer Service Victor Dominello believes that while the tide is turning, NSW is still very much in transition.

"Let's assume and hope the vaccine is here by March. The narrative changes again when the vaccine arrives," he says.

"We just can't let our guard down - it's still volatile. We're almost there. We're only about three or so months away from a rethink."

Recent early successful trials of COVID-19 vaccines have buoyed the government in its efforts to recharge the economy after a $16 billion deficit was revealed in the recent state budget.

Dominello says the "robust" confidence of the NSW cabinet is thanks to the state's dual approach to health and the economy, in particular through the roll-out of QR code check-ins; now in place at 85 per cent of hospitality venues.

Elsewhere the technology has been slow to catch on, with WA and South Australia first announcing mandatory apps this week. Queensland and Victoria are also yet to see widespread use.

Dominello says the technology, now widely used through the Service NSW app, was at the centre of NSW's "digital core".

"I will be fighting tooth and nail to keep QR codes and the digital grid until the vaccine is rolled out," he says.

Can the same be said for other states?

"I think it's fair to say other states are very skittish, nervous of their own backyard. Look at Western Australia… all they've done is create a hermit kingdom," Dominello says.

"JobKeeper, the economic life boat, sails away in March. For those economies and states that just want to put up the great wall, I fear the reckoning will come."

Among industries hardest hit by the pandemic has been the hospitality sector, where jobs are still down more than 14 per cent. 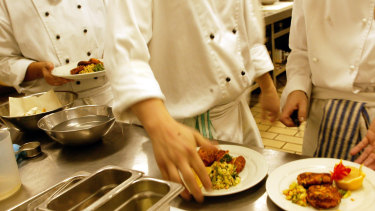 The catering industry has been among the hardest hit by the pandemic.Credit:Jim Rice

But figures from peak body Restaurants and Catering Australia suggest some businesses could still break even in 2020, if patronage restrictions continue to ease.

Average earnings for NSW restaurants and cafes over the course of 12 months are down 16 per cent on last year. But for the two months of September and October, earnings have ticked up 20 per cent.

"All that pent up demand and extra money everyone has from not going out and travelling, that's flowing into food and beverage," says RCA chief executive Wes Lambert.

"It's not crazy that venues could break even, if they are able to let rip in December. Some venues do 40 per cent of their annual revenue in December, January and February alone."

The priority now is ensuring larger venues can also benefit from a one person per two square metre limit, he says.

"It's a really mixed bag in terms of recovery. In the function and catering space it's the worst it's ever been. We say it's feast and famine."

Arik Shifroni, owner of The Darlin Group behind the Bondi Pizza brand, manages eight restaurants across Sydney. He feels confident about the summer period because international travel restrictions mean more people are staying and spending at home.

"September was a fantastic month … October was a bit slower because of the Melbourne outbreak, and November is looking very good." he says.

But in corporate catering things are yet to look so rosy. Companies like Carlo Huber's European Catering are staring down the barrel of a "work from home" future and crying out for business to return to the CBD.

"We need people to come back into the boardrooms again," Huber says.

Clattenburg on the referee of the Liverpool - Manchester United match: He should have waited in the Manet episode, but I wouldn't criticize him
I put Messi on the body and he got angry and slapped me in the face. Obvious aggression. Athletic forward about red Leo
Messi can be disqualified for 2 games. The referee did not indicate that the Barca forward showed aggression by hitting the opponent on the head
Pirlo about 0:2 from Inter: The coach should be the first to take the blame. We were too predictable
Solskjaer about 0:0 with Liverpool: We didn't deserve to win. We wanted to come and make a result, given their injuries
The field is the safest place we have. Liverpool and Manchester United postponed the leadership showdown for the second half of the season
Messi can be disqualified for 4 matches for hitting an Athletic player on the head
Source https://www.theage.com.au/national/nsw/state-awakens-borders-set-to-reopen-as-nsw-embraces-more-freedoms-20201127-p56inc.html?ref=rss&utm_medium=rss&utm_source=rss_feed

Ngaiire effortlessly establishes her own musical world in intimate show

What whingeing tennis stars don’t get