Washington: The US Supreme Court has ruled that the Manhattan district attorney can gain access to President Donald Trump’s tax returns, but kept a hold on Trump’s financial records that Congress had been seeking for more than a year.

The court said Manhattan District Attorney Cyrus R Vance Jr had the authority to subpoena the tax returns from Trump’s private accounting firm. Trump had claimed an immunity from criminal investigations while in office. 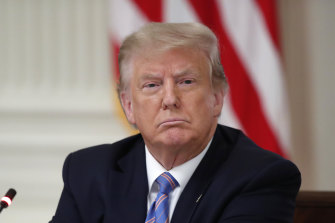 The justices by a 7-2 vote ruled that Trump was not above the law and must comply with legitimate demands from a grand jury in New York that is investigating Trump's alleged hush money payments to two women who claimed to have had sex with him.

Trump had sued to block the subpoenas and claimed that as President he had an "absolute immunity" from demands for personal or confidential information.

In a separate decision, the court blocked for now House subpoenas that might have led to the public release of Trump's financial records before the election.

That ruling returns the case to lower courts, with no clear prospect for when the case might ultimately be resolved. The 7-2 outcome is at least a short-term victory for Trump, who has strenuously sought to keep his financial records private.

The cases were perhaps the most far-reaching of Trump's presidency, testing his claim to broad protections from congressional and state criminal investigations while in the White House.

Conte on rumors about Juve: I will sue whoever wrote this, as well as the editor-in-chief of this newspaper
Aubameyang on the failure of the FA Cup: That's how we do it
Manchester City remain Interested in Coulibaly and Pau Torres, despite ake's transfer from Bournemouth
Up to 10 players will leave Chelsea this summer. Among them are Kante, Kepa and Marcos Alonso
Sancho has agreed a 5-year contract with Manchester United. The clubs are at an advanced stage of negotiations
Willian is in talks with Arsenal. He refused to sign a 2-year contract with Chelsea
Antonio Conte, Denying what was asked of the players See about the future of Surrey. I have a contract with Inter for 3 years
Source https://www.smh.com.au/world/north-america/supreme-court-rules-manhattan-district-attorney-can-obtain-trump-tax-returns-20200710-p55aqx.html?ref=rss&utm_medium=rss&utm_source=rss_feed