Take to the sky: how property development could save Sydney's arts scene

The business lobby says arts and entertainment venues across Sydney should be permitted to sell their air space to raise money, while developers should be offered incentives to build new cultural facilities in a bid to revive an industry stricken by the COVID-19 crisis.

The Sydney Business Chamber suggested cultural venues could secure their future by becoming property developers. In its report Night Shift: Moving Sydney to a 24-Hour City, the lobby group says venues could sell off their airspace and transfer it elsewhere as bonus floorspace. 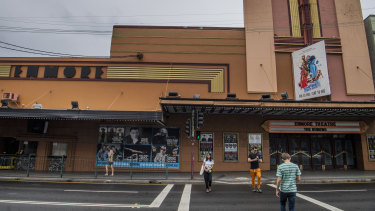 Arts and entertainment venues should be allowed to sell their air space to raise money, the Sydney Business Chamber says.Credit:Louise Kennerley

"Unfortunately, trading heritage floorspace is currently limited to only Sydney's CBD, but it could be expanded to cover other precincts across the metropolis," the chamber said.

A venue such as the Enmore Theatre or The Roxy in Parramatta could sell air space to a developer who would use it to increase the height and floorspace of their building elsewhere. Chamber boss Katherine O'Regan said this did not mean tall towers would be built over cultural venues.

Incentives such as offering additional floor space to developers that create cultural facilities and allowing the air space above venues to be sold have been successful in the past, Ms O'Regan said.

"A similar scheme developed statewide [could] save the dozens of venues currently left vacant or threatened with closure and demolition," she said.

The chamber also said there should be more flexibility in planning codes to give incentives to the private sector to build cultural facilities. These options could be included in a "Places of Cultural Importance SEPP" - a state planning instrument that can override local planning rules to permit certain types of development such as childcare centres, aged care facilities and boarding houses.

The City of Sydney is requiring the developer of a hotel on the site of the former Academy Twin Cinema in Oxford Street, Paddington, to include an entertainment venue.

The council has also backed a plan to revitalise Kings Cross including the reopening of the old Minerva theatre and the creation of a new theatre and arts precinct.

"As restrictions ease and we emerge from the pandemic, we will need to work creatively with councils and businesses to rethink our night time economy and develop a vibrant and safe nightlife for Sydneysiders and tourists alike," he said.

With Carriageworks facing an uncertain future after it was placed in voluntary administration, Mr Stokes also said the government would also consider allowing retail and other businesses to operate 24 hours a day "post-pandemic" to stimulate the night time economy.

"The COVID-19 pandemic has stripped away our nightlife and reminded us just how valuable it can be," he said.

Ms O'Regan said the city's night time economy lacked diversity and was "almost entirely reliant on alcohol". "But if the arts and live performance are not going to be funded by alcohol sales, how are we going to provide venues and outlets for Sydney's creatives?" she asked.

Ms O'Regan said arts venues and theatres were a vital part of the night time economy, acting as anchor tenants for late-night precincts.

For example, the Enmore Theatre generated more than $40 million for neighbouring businesses as well as supporting other smaller venues. "If the Enmore closed much of the night life of Newtown and Enmore would also disappear," she said.

Labor's arts spokesman Walt Secord said the COVID-crisis had devastated the cultural sector and called for a "bold, new, edgy approach" with a NSW-industry specific rescue package - including new approaches to planning and the night-time economy.

He also said Premier Gladys Berejiklian, who is now the Arts Minister following the resignation of Don Harwin, had neglected the arts.

"It is time for an emergency arts package to support organisations and artists who have been without income or a revenue stream for weeks," Mr Secord said.

Manchester United are Interested in Benfica midfielder Florentino. They call it the Octopus
Ronaldo became the first billionaire footballer
Messi is healthy and ready to train. He will be able to play against Mallorca
Gasperini on criticism from Valencia: This controversy is offensive and ugly
Giovane Elber taped his mouth shut to avoid getting a red for talking. But all the same I left – I hit the opponent with an elbow
Barcelona will not receive additional funds for transfers in the summer. The club will only be able to use the money from sales
Barcelona offers 80 million euros and Firpo Inter for Lautaro
Source https://www.smh.com.au/national/take-to-the-sky-how-property-development-could-save-sydney-s-arts-scene-20200515-p54tg4.html?ref=rss&utm_medium=rss&utm_source=rss_feed

'We are burning cash': Club rugby joins calls for clarity on community sport

It's taken far too long to rectify robo-debt distress

McGregor's deal was bad, but bringing Flanagan back early would be worse

Man crushed to death by pole in Altona industrial accident

'Nothing is stopping us': Black Lives Matter protesters to push ahead

‘Little faith left in the system’ as premiers ‘cower to left-wing protesters’: Credlin

‘Pathological hypocrisy’ at the heart of UK race-based protests

'Football needs a home': FFA to lobby government for new base

Agony and ecstasy of ballet captured in Chengwu Guo documentary

'I want to prove it wasn’t a fluke': Innes chases Stradbroke dream

Police search for Perth teenager missing since May

AFL players to thrill and chill at new-look Big Freeze

Australia watches in horror as US goes to the brink

This NRL club is rotten to the core

Lions take a knee in stand against racism

Police accused of brutality in Buffalo, NY as elderly man pushed to the ground