An appeal court has overturned a decision that paved the way for some working holidaymakers from countries, including the US and Britain, to receive a refund of the so-called "backpacker tax", in a boost to the budget bottom line.

On Thursday the Full Court of the Federal Court upheld a Tax Office appeal against a decision of Brisbane-based Federal Court Justice John Logan, who ruled in a test case last year that the backpacker tax could not be applied to a British woman in Australia on a working holiday visa. 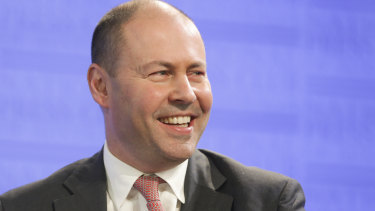 A win for Treasurer Josh Frydenberg: The Full Federal Court found the Backpacker Tax applied to a British national on a working holdiay visa. Credit:Alex Ellinghausen

The decision is a win for the ATO and Treasurer Josh Frydenberg, whose precedecessor-turned Prime Minister Scott Morrison introduced the tax.

In a decision in October, Justice Logan found the backpacker tax fell foul of a non-discrimination clause in a double taxation treaty between the UK and Australia.

The treaty between the two countries provides that parties shall not tax citizens from the other country in a "more burdensome" way than their own citizens who are also residents for tax purposes.

Similar treaties exist between Australia and the US, Germany, Finland, Chile, Japan, Norway and Turkey.

But the majority of the Full Court – Justices Roger Derrington and Simon Steward – said on Thursday the tax did not fall foul of the treaty between Australia and the UK.

The tax was applied because the woman, Catherine Addy, had a particular type of visa and not because of her nationality, they said.

"Whilst it may be true that only foreign nationals can obtain and hold a 'working holiday visa' there is no requirement to hold one because of their nationality," Justice Derrington said.

"If it were the case that differential tax was imposed on any person who held a visa of any type, it might well then be argued that this was, in effect, the imposition of tax based solely on nationality.

"But here it was not suggested that Ms Addy was not entitled to apply for any of the other range of visas which may have been available."

The backpacker tax, which took effect in January 2017, scrapped the tax-free threshold of $18,200 that applied to some visitors on working holiday visas and replaced it with a 15 per cent tax rate on all income up to $37,000. Higher rates in line with ordinary income tax rates apply thereafter.

The Coalition had estimated the change would add millions to the budget bottom line, but significantly less than the $540 million initially forecast when it proposed a 32 per cent tax rate be applied from the first dollar of income.

The ATO said last year the previous decision only affected a "minority" of working holidaymakers who were residents of Australia for tax purposes, and whose home country had a double tax treaty with Australia as in this case. In this case, Ms Addy was considered a "resident" because she had spent more than 183 days in Australia.

Liverpool will buy Jota for 41 million pounds. Wolverhampton will pay up to 13.5 million for Hoover
8 is Bavaria's favorite number. Now she beat Schalke: Gnabry scored a hat-trick, Sane scored 1+2, Lewandowski came up with an assist by rabona
Liverpool agreed a 5-year contract with Jota. The transfer amount could be 43 million euros
I left everything and went to the other side of the world for my favorite team. The heartwarming story of a Norwegian fan in love with Santos
Lewandowski scored in the 1st round of the Bundesliga in 7 seasons and repeated the championship record
Gnabry scored a hat-trick against Schalke
Lewandowski scored for Schalke in their 10th Bundesliga game in a row. This is a League record
Source https://www.smh.com.au/national/tax-office-win-in-overturning-backpacker-tax-ruling-20200806-p55j5m.html?ref=rss&utm_medium=rss&utm_source=rss_feed

About Last Night: my partner is risking his health. What should I do?

Sidebottom decides to stay in Victoria, won't play again in 2020

Come a certain age, sex is all most women want

LeBron is seriously ‘p***ed off’ over snub

Things get really weird for Ricciardo

Miranda Devine apologises for tweets ahead of defamation settlement

The NFL and AFL have led the way. When will the NRL have a female coach?

Greek to the rescue as US runs out of hurricane names

Amazing sportsmanship sealed with a kiss

WA is only just starting to wake up to Vietnam's opportunities

‘COVID GAME-CHANGER’: Divisive drug could be our ‘saviour’ from virus

As it happened: Fans shoot the messenger after stuttering start by Seven

Enormous 6-year-old is a football monster

Home has a beautiful view with a difficult aspect

How learning an instrument can fine-tune your health

How to give your hair a boost between colour treatments

'Irreplaceable' books by Galileo, Newton found under house in Romania

How football megastar made his billions

The pandemic election: Premier puts it on the line over borders

Real estate boom is the toast of the town