Washington: Some call him Teflon Trump, because he’s survived more scandals than most modern presidents in US history.

But today’s Supreme Court ruling, which found that US President Donald Trump did not have absolute presidential immunity from criminal investigations, was a sobering reminder that no president - no matter how loved, loathed, or lucky - is above the law.

With four months until election day, the long-awaited court ruling was a mixed bag for Republicans, Democrats and voters.

On the one hand, it was a legal defeat for Trump, who will now have to fight to keep his taxes and financial records hidden from a New York Grand Jury.

This could have major ramifications when he leaves office - including the prospect of a criminal prosecution if he can’t successfully challenge the case. 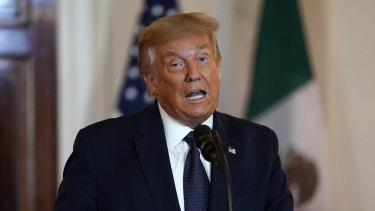 On the other hand, it represents a political victory for the President, because Congress - and indeed the public - won’t be able to examine his financial records any time soon, let alone before the November 3 election.

As such, Trump will remain the only US presidential candidate who has refused to release his tax returns. The obvious question is: Why?

While the decision might be a blow for transparency, the silver lining can be found in the court’s rejection of Trump’s central argument: that sitting presidents cannot be indicted, and should therefore not be beyond the reach of any part of the criminal justice process - including grand jury subpoenas.

Remember when Trump’s lawyers went so far as to argue that he could not be prosecuted for a crime, even if he shot someone in broad daylight on Fifth Avenue? Today, in a win for the rule of law, the court made it clear that presidential power is not absolute after all.

“Two hundred years ago, a great jurist of our court established that no citizen, not even the President, is categorically above the common duty to produce evidence when called upon in a criminal proceeding,” the court said.

“We reaffirm that principle today.”

The decision was handed down with seven votes to two. Interestingly, two of Trump’s hand-picked Supreme Court nominees - Justice Brett Kavanagh and Justice Neil Gorsuch - sided with the majority.

Trump was clearly not happy about the verdict, tweeting seven times in the space of two hours about “presidential harassment” and being the victim of a “witch hunt”.

Quite frankly, it could have been worse. After all, the Supreme Court examined two separate cases, both of which sought similar financial information into whether Trump or the Trump Organisation violated state laws through hush-money payments made to two women he allegedly slept with years ago.

But only one of those subpoenas, brought on by Manhattan District Attorney Cyrus Vance, resulted in a ruling that Trump’s records could be pursued - and even then, the court noted that the President had every right to challenge the matter, which his lawyers have vowed to do.

In the second case, brought forward by Congressional house committees, the court temporarily blocked access, noting that “congressional subpoenas implicate special concerns regarding the separation of powers. The courts below did not take adequate account of those concerns.”

Both matters will now go back to lower courts, which means that the President’s taxes won’t be turned over to a Grand Jury for months, let alone inflict the kind of pre-election damage the Democrats had hoped for.

Farrah Tomazin is a senior journalist and investigative reporter for The Age, with interests in politics, social justice, and legal affairs.

Liverpool are close to buying a defender for Olympiakos Tsimikas. Medical check-up-this week
Barcelona intends to sign Bernardo Silva. City can get Semeda
Real are planning to buy Dybala and are ready to include Kroos or ISCO in the deal (Sport Mediaset)
Conte about Inter before the 1/4 Europa League: we Continue to progress, we become stronger
Piontek is Interesting to Fiorentina. Herta wants just over 20 million euros
Barzagli or Grosso will replace Pirlo in Juventus U23
Daudov about Akhmat: I am Sure that the team will Interact better with each new game
Source https://www.smh.com.au/world/north-america/teflon-trump-lives-to-fight-another-day-20200710-p55as5.html?ref=rss&utm_medium=rss&utm_source=rss_feed

How to hack your way to a pay rise

Aussie state that got the biggest handout

Furnished Hanseatic to stick to sprint trips in spring

Victory legend Muscat off to flying start in Belgium

Pregnant mum predicts her own death

Don’t be ashamed of those extra kilos

Shades of Waititi in this home-baked comedy

Faced with a digital divide, one country cancelled the whole school year

Spike in reckless 'selfie stunts' on Sydney trains during lockdown