Tel Aviv: The red, white and cedar green of the Lebanese flag were lit up over a Tel Aviv square on Wednesday in a rare show of Israeli solidarity with Beirut as it reels from a devastating explosion.

The massive warehouse explosion in Lebanon's port district of the capital Beirut on Tuesday killed at least 135 people and injured more than 5000. 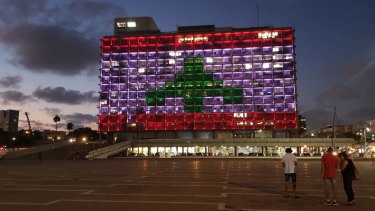 City Hall in Tel Aviv's Rabin Square was lit up in the colours of the Lebanese flag on Wednesday.Credit:Facebook/TelAvivCityIL

Israel has been in a technical state of war with Lebanon for generations, and it deems the country's armed Shi'ite Muslim group Hezbollah, backed by Iran, the biggest threat across its northern border.

Israel and Hezbollah fought a month-long war in 2006 and have traded fire again in recent weeks.

But, arguing that "humanity comes before any conflict", Tel Aviv Mayor Ron Huldai ordered City Hall on Rabin Square, named for the late Israeli prime minister Yitzhak Rabin, to be illuminated with the Lebanese flag on Wednesday evening.

At nightfall, windows on the 13-storey building's facade were filled with light in the design of Lebanon's flag: two horizontal red stripes enveloping a wider band of white, with a large green cedar tree - Lebanon's national symbol - at the centre.

The decision drew criticism from some Israelis, including cabinet minister Rafael Peretz, who on Twitter likened it to "raising [an] enemy state's flag in the heart of Tel Aviv".

Lebanon has not responded to the overture, according to an Israeli defence official, who suggested that Israel with UN support could "set up and operate field hospitals on our side of the border and admit casualties from Lebanon".

In the Israeli-occupied West Bank, Palestinian President Mahmoud Abbas declared Wednesday a day of mourning and ordered Palestinian flags in the territory to be lowered to half mast in solidarity with Lebanon.

Koeman Pro 3:0 with Celta: Proud of the team. The results show that we are on the right track
Milan extended their unbeaten streak to 18 games by beating Rio Ave on penalties in the Europa League qualifier
Arteta on Manchester City in the League Cup: Arsenal are not very lucky with the draw. This is another test
Klopp about losing to Arsenal and Liverpool in the country of dreams, you have to score. Last pass failed
Muller held the UEFA ceremony in the stable. There had Neuer, Kimmich and Evangeliski
Liverpool 4 seasons in a row, cannot get past the 5th round of the League Cup and 2012 wins the tournament
Leno - first Arsenal goalkeeper in 8 years not to miss at Anfield
Source https://www.theage.com.au/world/middle-east/tel-aviv-s-city-hall-lit-up-in-colours-of-lebanese-flag-in-support-over-beirut-blast-20200806-p55jc3.html?ref=rss&utm_medium=rss&utm_source=rss_feed

Curtains for Sizzler in Australia as COVID forces full closure

Shopping centre locks down as police respond to 'serious' incident