Australian all-rounder Mitch Marsh is hoping to avoid a worst-case scenario of three months on the sidelines but clarification of his ankle injury has been stalled by a "weird" decision from his Indian Premier League franchise to not pass on his scans.

Marsh, 28, fears he has a syndesmosis injury, having been hurt while fielding in his follow through while bowling for the Sunrisers Hyderabad in the United Arab Emirates this month. 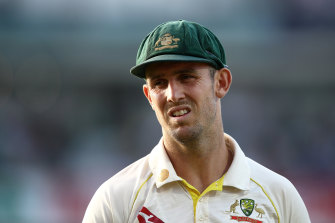 Mitch Marsh has not been given the scans on his ankle.Credit:Getty Images

Scans were taken in Dubai but rather than given to Marsh or Cricket Australia, only a report was forwarded to CA's medical staff.

CA told The Age and Sydney Morning Herald this wasn't a major issue, given Marsh was always going to be re-scanned once he arrived home. But it has held up giving the player greater clarification on what is wrong. Marsh is in quarantine in his home city of Perth and is due to have the ankle scanned this week.

Marsh has already consulted AFL players about syndesmosis injuries and hopes he can avoid surgery. He has been told he faces anywhere between a month and three months on the sidelines but but won't know the full story until scans are completed.

"I don't really know what happened to the scans over in the UAE. Cricket Australia haven't been able to get their hands on them. It is a bit of a weird situation," Marsh said on Tuesday.

"So, hopefully, I will go for another scan at some point this week if I can get clearance and then we will be a lot clearer on what we are dealing with.

"At this stage, I am hoping I can get back for at least one [Sheffield] Shield game which would be great."

Marsh, on a $408,000 contract, was injured in the Sunrisers' opening match but showed great courage to come out and bat for his captain David Warner despite being hurt earlier in the evening.

The Sheffield Shield season opens next month, and Marsh is a man the Australians want fit come the start of the international summer against India. He is a part of the white-ball squads and was firming to return to the Test squad, particularly as an extended squad will be needed because of bio-security issues.

The Perth Scorchers captain has had a wretched run with injury, having had ankle and shoulder problems, and he broke his hand while punching a wall at the WACA last summer. He played the last of his 32 Tests in the fifth Ashes Test at The Oval last year

Hans-Dieter flick: I Hope Alaba will sign a contract with Bayern. Our club is one of the best in the world
Diego Maradona: Messi gave Barca everything, brought them to the top. He was not treated the way he deserved
Federico Chiesa: I hope to leave my mark in Juve. We will achieve great results
The Coach Of Benfica: I don't want us to look like the current Barcelona, it has nothing
Guardiola on returning to Barca: I'm happy at Manchester City. I hope to stay here
Fabinho will not play with West ham due to injury
Ronald Koeman: Maradona was the best in his time. Now the best Messi
Source https://www.smh.com.au/sport/cricket/that-s-weird-ipl-franchise-leaves-injured-marsh-in-the-dark-20200929-p5605u.html?ref=rss&utm_medium=rss&utm_source=rss_feed