The court battle is over, but will Johnny Depp and Amber Heard return to Hollywood?

The courtroom battle between Johnny Depp and his ex-wife Amber Heard dragged on for months, but it took the jury just 13 hours to reach their verdict, ruling in favour of Depp.

The seven jurors found that Heard’s 2018 opinion-editorial essay in The Washington Post defamed Depp in claiming he had abused her throughout their relationship. 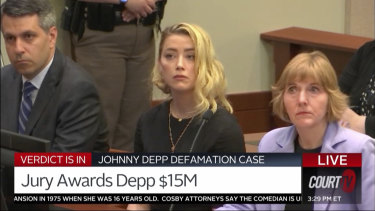 In this screen grab from video, Amber Heard, centre, and her lawyers Elaine Bredehoft, right, and Ben Rottenborn, left, react as the verdict is read.Credit:AP

Depp, 58, was awarded $US15 million ($21 million) in damages. A countersuit claim launched by Heard, 36, was also resolved, with the jury ruling that statements made by Depp’s former attorney Adam Waldman in 2020 to the Daily Mail, in which he described Heard’s allegations of abuse as a “hoax”, were defamatory.

The jury awarded Heard $US2 million in compensatory damages.

If the trial by TikTok was anything to go by, a Depp victory seemed a foregone conclusion but now that the court has officially handed down its findings, the focus shifts to the future.

Both Depp and Heard have claimed that their career prospects have been dented due to the accusations. In fact, Depp’s entire defamation suit hinged on the argument he lost roles in Pirates of the Caribbean and Fantastic Beasts as a result of Heard’s Washington Post op-ed.

Meanwhile, Heard testified that her role in Aquaman 2 had been pared back, with several scenes cut out of the original script. She also told the court, “I had to fight really hard to keep my career; I lost opportunities. I got cancelled from jobs. I got dropped from a campaign I had shot. I fought to keep my job in the biggest movie opportunity I had to date — Justice League, with the option [for] Aquaman.”

Aquaman 2 is scheduled for release in March 2023, but the DC film represents the only big-budget movie Heard has on the horizon.

Heard has two other films in post-production, both slated for release in 2023: an independent movie titled In the Fire and another low-budget movie, Run Away with Me, filmed in 2018.

A possible next step for Heard could be to embrace her role as an advocate; the 36-year-old already lists herself as an “actor and activist” on Twitter.

Following the judgement, Heard’s frustration at the justice system was palpable. “I’m even more disappointed with what this verdict means for other women. It is a setback,” Heard wrote on social media.

Despite being able to claim “victory” following the court’s ruling, it remains to be seen if Depp will be able to resuscitate his career.

He has no projects of note on the horizon, save for an animated series called Puffins Impossible which sees Depp voice a cartoon bird. The actor is also in pre-production on the French movie Jeanne du Barry, though it is yet to lock down a distributor.

Depp may soon learn that it is one thing to win over the internet but another to convince a studio executive that you’re still bankable at the box office. If recent history is anything to go by, Depp may turn his attention to music, a pursuit he often cites as “his first love.”

The actor was absent from the jury’s verdict because he had been in the UK performing with guitarist Jeff Beck. The pair performed on stage at the iconic Royal Albert Hall over the weekend, playing covers of Jimi Hendrix’s Little Wing, Marvin Gaye’s What’s Going On, and the John Lennon song Isolation.

According to The Telegraph, Depp – who is also part of the band Hollywood Vampires with Alice Cooper and Joe Perry – is expected to join Beck at the rest of his UK gigs.

While Depp’s days as a studio heavyweight might be numbered, it appears not all his revenue streams have dried up. Luxury French designer Christian Dior has silently stood by the actor, maintaining him as the face of its Sauvage men’s fragrance.

As The New York Times notes, click on the Sauvage website, and you’ll be met with “Mr Depp’s smouldering self strumming his electric guitar in the desert and intoning, ‘In the wilderness, fearless and human, Sauvage’.”

Ultimately, Depp may bank his comeback on widespread “cancel culture” fatigue, while Heard will hope the internet’s short attention span means TikTok finds a new target sooner rather than later.

The new few months will prove telling as both parties look to pick up the pieces, but if Depp and Heard have learned anything from this exhaustive process, it’s that there is such a thing as bad publicity.

Support is available from the National Sexual Assault, Domestic and Family Violence Counselling Service at 1800 RESPECT (1800 737 732).