The good, the Brad and the ugly: Did the media go too far?

State of Origin left Brad Fittler in a state of euphoria. The last-gasp win is now the stuff of legend.

But, once he came down to earth, Fittler unloaded. On the media.

“There’s a few things I thought were unfair – around the anthem and trying to bring in racism," Fittler said. "I thought that was really irresponsible. I don’t like that at all.

“The media played a big part this year in the way they ran with State of Origin. It seemed to get very personal. It got a bit nasty at stages. They just seemed to take it to another level I felt. That just highlighted everything, made it a bit more intense.”

We need to fill in the blanks here, as there’s quite a bit to fill in. The reporting of one story, in particular, seriously upset Fittler and the Blues’ hierarchy.

But, let’s deal with the anthem story first. It was only amplified in the lead-up to Origin I because Cody Walker was selected. Walker, as captain of the Indigenous team for the All-Stars match that kicked off the season, didn’t sing the anthem and it became an issue. He became the face of non-anthem-singing Indigenous Australians. 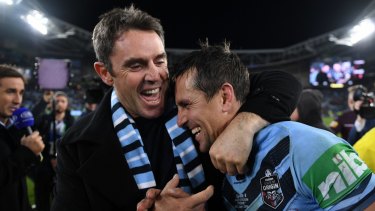 Happy days: Brad Fittler and Mitchell Pearce celebrate a remarkable Origin series win. But it wasn't all smiles for the Blues coach.Credit:AAP

As explained several weeks ago here, Latrell Mitchell, Josh Addo-Carr and James Roberts didn’t sing the anthem before any of the Origin games last year. It’s just that no one noticed. Therefore, no one was offended.

Fast-forward a year and, suddenly, there was a part of society that was upset they weren’t singing. It was brought up with Walker and the Indigenous players over and over.

The other story is a lot more sensitive.

On the Monday before Origin I, the Blues flew to Brisbane. That morning, someone circulated rugby league’s latest “sex tape” to the media. It purportedly depicted a Blues star in a group sex act with a woman. It was captioned “dirty dawg”. Here we go again.

The problem was, it wasn’t the Blues star the person said it was. It was just a guy with a questionable resemblance to said Blues star.

It wasn't a story. But, suddenly, as the Blues landed, it was a story. It burst to life on news websites desperate for an “Origin sex tape” headline.

Blues officials, such as NSW Rugby League chief executive Dave Trodden and Blues assistant coach Greg Alexander were quoted. Trodden was threatening legal action and suggested the “timing was dubious”, while Alexander labelled it a deliberate “stitch-up”, designed to rock the Blues two days out from the start of the series.

The story should never have seen the light of day.

Someone circulates a sex tape to media and suggests it’s a Blues player, when it wasn’t, and it’s a publishable story? It’s not.

Fittler is still angry about it.

“This year’s been different to a lot of other years. They were the only two things where they took it too far – too far.”

The only hint of caution I’d give Fittler is not to forget the hundreds of wonderful stories written about the Blues.

He should take note of Origin veteran Sam Thaiday, who said: “If you look at State of Origin as a boxing match, as a battle, the media, at the end of the day, they’re the Don King, they’re the promoter.”

Trent Barrett is a free man. His ugly, drawn-out exit from Manly during the back half of 2018 included a clause, insisted on by Manly, that he was contracted to them until Saturday.

Manly owner Scott Penn refused to pay Barrett to do nothing. Then Penn signed Des Hasler, who insisted Barrett do nothing.

Anyway, it’s over and Barrett is on the lookout for a job. 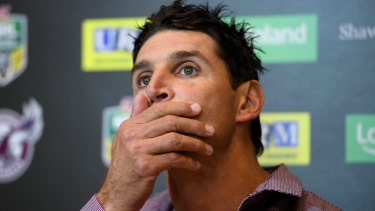 He begins his rehabilitation this week by joining the camp of one of the great sporting teams on the planet, the All Blacks. He’ll be with them in the lead-up to their Test against South Africa next Saturday.

His agent, Wayne Beavis, has already put his name forward for the vacant Gold Coast Titans job. Unfortunately for Barrett, Beavis also put forward another of his clients, Anthony Griffin.

Barrett did himself no favours with his now-infamous “I brought in my own furniture” interview where he claimed he had to provide backyard equipment for the team’s common room.

Also doing him no favours is the fact he coached Manly to a meagre seven wins last year, then Hasler took over at the same place with no furniture and has driven them into the eight, while Daly Cherry-Evans and Tom Trbojevic missed a lot of football.

He won’t be getting the Titans job.

A Parma employee has a coronavirus. The team is isolated on the base, but will continue to play in the championship
Kalidou Coulibaly: Napoli is not going to Barcelona as tourists. We are able to give battle
PSG have extended their contract with Kimpembe until 2024
Suarez is not in the start for the match with Valladolid. He has scored 4 goals in the last 4 games for Barca
Dyche Pro 1:1 with Liverpool: top team Scored. Talking about three points is too much
Klopp on the draw with Burnley: Liverpool should have scored 3-4 goals. We are disappointed
Barcelona must pay Borussia 20 million euros if they sell Dembele
Source https://www.theage.com.au/sport/nrl/the-good-the-brad-and-the-ugly-did-the-media-go-too-far-20190718-p528jb.html?ref=rss&utm_medium=rss&utm_source=rss_feed