In 1973, Simon Townsend saw something that changed his life.

He was a pimply boy from the suburbs, walking along the Warburton pipeline, east of Melbourne, when he glimpsed an animal the size of a German shepherd dog that he believes was a black panther.

“It was glistening in the winter sunshine, completely black, I could see the muscles moving under the skin. I still dream about the malevolent stare it gave me, that particular look was very personal.” 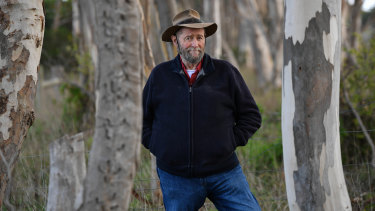 Big cat researcher Simon Townsend saw what he believes was a black panther in 1973.Credit:Joe Armao

The chance encounter lasted just seconds but it triggered a lifelong quest to scientifically prove something that has been part of rural Australian folklore for more than a century – the existence of big cats in the wild.

“Round here, locals talk about the cat in hushed tones,” says Townsend, who has lived in the small Victorian rural community of Freshwater Creek for 30 years.

“It’s a very divisive issue. People say when they see me: ‘here comes the panther man’.”

Townsend is one of the quixotic big cat researchers who feature in The Hunt, a new documentary that explores the mystery of big cats in Australia.

The Hunt’s writer, director and cinematographer, Stu Ross, grew up in Geelong, down the road from Townsend, hearing stories of big cat sightings in the Great Otway National Park.

“They always intrigued me and as a film-maker I thought that story needed to be told,” he says. 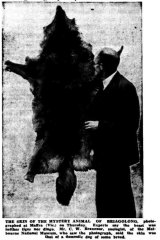 A zoologist from the Melbourne National Museum with the skin of the mystery animal of Briagolong in 1936, which experts said was a dog not a tiger.

“The fact these guys have dedicated their lives to big cat research became the interesting part of the story with the mystery as the backbone.”

Over the past century, there have been thousands of reports of big cat sightings in Australia despite the fact no skeletal remains have ever been found.

One widely cited theory is that pumas were kept as mascots by members of the US military stationed in Townsville and Nhill in the early 1940s and released before their departure.

Another is that big cats escaped from zoos or circuses. A third points to the exotic animal trade – primarily primates and big cats – among the Chinese community in the gold rush era.

“Stories go back a long way and are very deeply entrenched in Australian culture,” says David Waldron, a senior lecturer at Federation University in Ballarat, who co-wrote a book on big cat folklore, Snarls from the Tea-tree, with Townsend.

Waldron says one of the things that makes him sceptical is the lack of primary evidence. Unlike in the US where there are populations of pumas, no big cats have ever been captured in trail camera photographs nor have specimens been gathered in wildlife surveys.

“I see it as a cultural phenomenon rather than a physical one, although I am sure many will disagree.”

But a Deakin University study in 2001 concluded there was “sufficient evidence … to affirm beyond reasonable doubt the presence of a big cat population in western Victoria”. 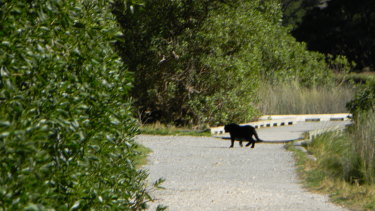 A photo sent to Simon Townsend from somewhere in the Otways, which he believes to be a hoax involving a feral cat.

Before the 2010 election, the Victorian Coalition pledged an investigation into the big cat issue to establish ''once and for all'' if they actually existed.

There was some scepticism. Asked if the government would investigate other urban legends, then agriculture minister Peter Walsh said farmers whose livestock had been killed had raised the prospect of big cats very seriously.

“We never gave any commitments about fairies at the bottom of the garden or UFOs or anything else,” Mr Walsh was quoted saying in the Warrnambool Standard.

But the 2012 study — by the Arthur Rylah Institute for Environmental Research — found the lack of any formal evidence strongly suggested there was no wild population of big cats.

It cited the so-called Lithgow panther case, where video footage of a large black cat in the Central Tablelands of NSW was examined by zoo, museum and national parks staff who concluded it was a “very large feral cat, two to three times normal size”.

The study said the “most parsimonious explanation” for many of the reported sightings in Victoria was that they were also large feral cats. 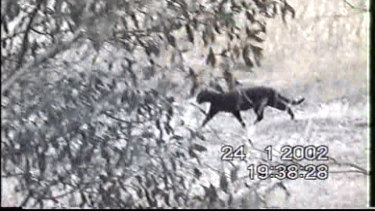 A large feral cat mistaken for a panther by a farmer near Ararat in 2002.

However it noted some strange anomalies.

“Some evidence cannot be dismissed entirely, including preliminary DNA evidence, footprints and some behaviours that seem to be outside the known behavioural repertoire of known predators in Victoria.”

The study said it received reports of partially eaten livestock where the flesh had been removed in a way beyond the capabilities of known predators such as dingoes or pigs.

The footprints referred to are photographs taken in 2005 on a sandy track near Longford pine plantation, south of Sale, which the study agrees are “highly likely” to have been made by a cat.

“Their reported dimensions are greater than could be explained by a domestic cat, however, that is as far as that line of evidence can be taken,” the study says.

And then there was the scat, or animal droppings, found at Wensleydale near the Otway Forest Park.

In 1991, David Cass, then an officer with the Victorian Department of Conservation and Environment, was contacted by a farmer reporting “really unusual stock kills”.

“He was a pretty good bushie who knew his stuff and he was standing over a couple of kills, shaking his head and saying ‘I don’t know what did this’,” Cass says.

The farmer gave Cass a scat, which was an unusual size and colour and had an acrid smell, that he had found in his paddock.

Cass sent it to an expert in the analysis of faeces, who extracted four black hairs and compared them to hairs from a black leopard at Melbourne Zoo. She found they had “very similar features”.

The 2012 government study said an expert from the Department of Zoology at La Trobe University later found the hairs from the farmer’s scat came from a leopard.

However, the results were never published because there was a “small possibility” of contamination with the Melbourne Zoo leopard hairs in the lab.

Cass is still disappointed by this, saying it is the closest anyone has come to proving the existence of big cats in the wild.

“I had no doubt — which is what I said in the documentary — that somehow there was a black leopard in the Otways in the early ’90s.”

Townsend says that in the The Hunt, he comes across as a bit of a Don Quixote figure. But he says he is obsessed with hard scientific facts.

“Rather than trying to take photos with trails cameras, I want to collect kills and examine tooth pit markings.” Townsend says this DNA technology, while still nascent here, is more advanced in the UK.

Ross, the director of The Hunt, wants to continue documenting the big cat researchers’ investigations and will seek further funding.

“I started off thinking it was urban myth but towards the end, I moved towards the believer side,” Ross says.

“Over a number of years, we spoke to hundreds of people. It is hard to discredit that many people telling exactly the same story. I am not going to commit to anything until we have proof, but it has definitely altered my opinion.”

In early June, Apollo Bay real estate photographer Amber Noseda snapped a photo of an unusual animal on her way home from photographing birds at Mount Sabine, deep in the Otway Ranges.

“I just thought it was a fairly large feral cat,” she says. 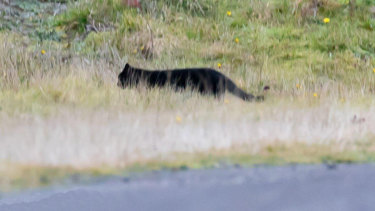 “It created a massive debate,” she says. While many people reported similar sightings, others made nasty comments. One woman texted to ask how dare she alert others to these majestic creatures in case they were hunted down.

Noseda was taken aback by the emotion her photo stirred up. “If I ever see another black cat again, I am going to keep it to myself."

Last week, Sophie Hammill was walking with her father along a trail near the Cape Otway lighthouse when she heard a rustle in the bush.

“I looked up and maybe eight metres in front of me, I saw this big thick long black tail swooped toward the path and these two black legs. It was the size of a tiger, definitely not a feral cat.”

Hammill says she would probably doubt people had she not seen it herself. “It was very strange but very exciting at the same time. It is something that will only happen once in a lifetime for me.”

The Hunt is on Discovery Channel and Animal Planet on demand.

England will remove players who intentionally cough at opponents and referees
Manchester City showed a new away form
The Icelandic national team presented their home uniforms for the 2020/21 season
In 1999, Arsenal beat Sheffield in the Cup, but Wenger offered to replay the match – because Kanu violated fair play
Milan and Napoli are Interested in Godfrey. Norwich wants 30 million euros for the defender
Wenger named the Champions League favourites: Manchester City and PSG
Manchester United are preparing an official offer for Sancho. Borussia demands 120 million euros
Source https://www.smh.com.au/national/the-hunt-for-big-cats-in-australia-20200703-p558qg.html?ref=rss&utm_medium=rss&utm_source=rss_national