'There are no rules in who is going to be successful': DMA'S return with The Glow

On March 6 this year, Sydney trio DMA’S played a sold-out show at London’s legendary Brixton Academy. It wasn’t lost on the trio that the gigs they played on their first tour of England several years ago were routinely attended by about 10 people, a bouncer and the bar staff.

On this chilly March evening, however, a packed room of 5000 swayed and danced as one, drowning out vocalist Tommy O’Dell even on a relatively new song such as Silver. Standing in the wings taking it all in was none other than former Oasis frontman Liam Gallagher, an avowed fan. 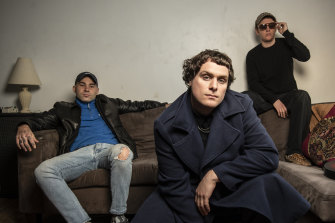 Sydney indie rockers DMA'S, (from left) Matt Mason, Johnny Took and Tommy O’Dell, are swapping their Britpop sound for a splash of dance music with new album THE GLOW.Credit:Wolter Peeters

“He was there before the show but he doesn’t come into green rooms before shows, which is a really pro thing to do,” explains guitarist Johnny Took from his home in Melbourne, a literal and metaphorical world away from a room full of people packed tightly together in London. “He gives everyone their space. So I went down and had a chat with him. It was a really special gig for us, man.”

Ask Took about his emotions as he walked to the stage for the band’s biggest London headlining show to date, and he’s matter of fact. “I was laughing, making jokes, just chilling. If you put the show on too much of a pedestal you’re not going to perform well. I know the songs, I know how to f---ing play them, I’m not going to play any better by thinking real hard. It’s not an exam. I just play music.

“But,” he adds, “it was a pretty amazing note to finish on.”

Only it wasn’t meant to be the finish. Like most people, DMA’S had plans for 2020, a large portion of which was meant to be spent on the road in support of their third album, THE GLOW. But then COVID-19 intervened, confining each member to their respective Australian homes and pushing the album back from its scheduled April release to mid-July.

Activity didn’t, however, grind to a complete halt. The LP’s title-track came out as a single - which off the back of the previously released track Life is a Game of Changing, suggested DMA’S were taking their third album into previously uncharted territory.

Instead of packing their rousing, anthemic melodies, downbeat, reflective lyrical themes and O’Dell’s sombre vocals inside football terrace indie-rock singalongs, the new material suggested a band dipping their toes into the world of dance music.

“We’ve always had a love for dance music and groove-based stuff,” says O’Dell from his Sydney home. “Some of our oldest demos were just a drum machine and vocals and guitar. When you’ve done two albums that are kind of rocky, it’s just wanting to push yourself a little bit more and take the band’s sound to different areas.”

The move wasn’t without its risks. Since forming in Sydney in 2012, their Britpop-indebted brand of indie-rock had propelled DMA’S to the upper echelons of the Australian music scene. Their first album, 2016’s Hills End, debuted in the ARIA top 10, as did its 2018 follow-up, For Now.

Ringing in Took’s ears as they prepared to start work on THE GLOW, however, was a conversation he’d had with O’Dell some years earlier. “I remember Tommy saying to me, ‘I want to be in two bands in my life, a rock’n’roll band and a dance act’,” recalls Took. “And I was like, 'F---, I could be in both of them as well but I need to learn how to. I need to get my head around aspects like drum machines and synthesizers and sampling and all that stuff.' ”

In late 2018 Took relocated from Sydney to Edinburgh for just under a year with his partner, singer Hayley Mary. He often spent his days exploring the Scottish city, walking the cobblestone streets of Edinburgh’s Old Town listening to British electronic acts such as Underworld and Chemical Brothers. Inspired by the pulsing beats and “crazy sequencers syncopating off each other”, Took considered how such influences could work in the band's music.

“But we didn’t want to just be that kind of jangly pop guitar band that tried to incorporate these ravier pop tunes into the set and it’s just a flop,” he says. “We wanted it to be legit.”

Assisting them in that quest was producer Stuart Price, a man whose credits are nothing if not legit, having worked with artists such as Madonna, New Order and Kylie Minogue.

After a few sessions with producer Scott Horscroft at the Grove Studios on the NSW Central Coast, for the first time ever the band recorded overseas, splitting their time between London’s Rak Studios and Westlake Recording Studios in West Hollywood, the location of Michael Jackson’s Thriller sessions. “That was really cool considering we started playing music in our shitty apartment in Newtown,” says O’Dell, noting that the band even recorded their first album there. 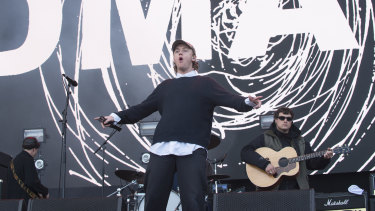 DMA'S, pictured on stage at the Isle of Wight Festival in 2019, count Liam Gallagher among their fans. Credit:Getty Images

Concerned that his charges not be overwhelmed by their surroundings, Price remodelled the studio so that it resembled what O’Dell calls “our bedroom set-up. He got a couch and a coffee table and set up his computer so we would just do takes all around each other like we did in our shitty apartment. Just with really expensive equipment.”

One of the recurring themes on the album is, says Took, adapting to change. In a superficial sense it’s there in the title of the pulsing Life is a Game of Changing; on a deeper level it can be found in the lyrics of Hello Girlfriend, a story about waking from a coma.

And while the LP is still undeniably the work of DMA’S, musically there have been changes to the band’s sound, as reflected in the loops that inform the Primal Scream-indebted album opener Never Before. Incorporating such sonic tweaks was made easier by the fresh perspective Took gained through his move to Edinburgh and the trio received through their work with Price.

“Your surroundings are really important as a songwriter,” says Took. “So if you’re stagnant and you’re having the same conversations in the same pubs doing the same drugs with the same people, it’s not going to get very exciting. So you’ve got to keep on your toes.”

It was while living in Newtown several years ago, having the same conversations in the same pubs, that Took wrote THE GLOW’s title-track. Featuring the line “I’m sick and tired of chasing the glow”, it reflected the frustration he felt at having pursued music in different guises – as a solo artist and with his bluegrass band Little Bastard – to little success.

“There’s definitely a frustration with musicians and artists because there are no rules in who’s going to be successful and quite a lot of the time just because you’re successful doesn’t mean you’re the best,” says Took. “And that’s a huge frustration. We knew we had something good in the early days of DMA’S, and I guess that’s what that lyric’s about. Being frustrated in thinking that you had something good that could resonate with lots and lots of people but for some reason or another it hadn’t connected.”

Took’s fortunes changed with the release of the band’s 2014 single Delete, the platinum-certified ballad coming in at No. 48 on that year’s Hottest 100. The same week guitarist Matt Mason wrote that song, he also penned a track called Cobracaine, about kids having a serious car accident while driving to the Gold Coast for schoolies. More than half a decade later it finally sees the light of day on THE GLOW, its tragic lyrical themes contrasted by blissful, pulsating beats.

It’s one of several tracks on the album that date back to the band’s early days, the trio possessed with the rare foresight to realise they weren’t ready back then to fully flesh them out to their full potential. “It took us two records and a bit of soul searching and a bit of time and experience to understand the song better and to make it what it is,” says Took.

For now, opportunities to perform Cobracaine in front of an audience with any regularity are thin on the ground. Certainly the odds of entertaining 5000 sweaty, rowdy punters (and Liam Gallagher) in a sold-out Brixton Academy any time soon are practically non-existent. Yet there are glimmers of hope, beginning with a series of socially distanced shows at Sydney’s Factory Theatre at the end of July.

“As an artist, performing is a fundamental part of our lives,” says O’Dell. “So when that privilege was taken away from us, we found it quite difficult. To be able to perform again to a live audience not only justifies our place in the world but it makes us realise just how important music is to our lives and so many others as well.”

It’s surely one glow the band will keep chasing for as long as they can.

Barcelona refused to sell for 60 million euros Trinca u, bought from Braga for 31 million. The club count on him
Chelsea will compete with Everton for Regilon. Real Madrid is ready to sell him
Espanyol asked La Liga to cancel the flight. The Catalans have been in the relegation zone since the fifth round
Inter have not yet decided on Conte's future. Everything will be decided after the Europa League
Haji resigned as Viitorul's coach
Karim Benzema: Ronaldo's Game made me love football
Sanchez will break his contract with Manchester United and leave for Inter for free. It will receive 7 million euros a year
Source https://www.smh.com.au/culture/music/there-are-no-rules-in-who-is-going-to-be-successful-dma-s-return-with-the-glow-20200707-p559tm.html?ref=rss&utm_medium=rss&utm_source=rss_feed

EPISODE FIVE: The campaigns that made a difference