This raunchy, risque nostalgia cash-in loses the plot of a classic

By Tyson Wray and Jessica Nicholas

This wrap of reviews for recent Melbourne shows starts with the musical Cruel Intentions, plus an international jazz treat from Trio Grande. 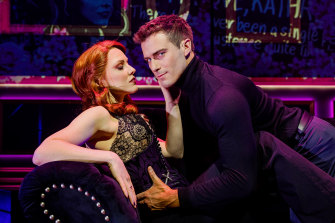 It’s as raunchy and risqué as the original motion picture riff on Choderlos de Laclos’ Les Liaisons dangereuses (Dangerous Liaisons), but the jukebox musical adaptation of Cruel Intentions seems to lack any purpose other than cashing in on nostalgia.

It also breaks the cardinal sin of musicals: a thoroughly muddled sound mix – with the live band (led by musical director Daniel Puckey) overbearing throughout.

Transporting audiences back to an era where Dolly Doctor was must-read material and hair gel and wallet chains were in vogue, the show is faithful to the original storyline of the lies, manipulation and sexual exploits of Kathryn (Kirby Burgess) and Sebastian (Drew Weston).

However, it fails to deliver on the nuance that elevated the film to a cult classic.

The dialogue, mostly verbatim, is rushed and poorly delivered. The infamous wager scene, which featured two of the most ribald lines ever delivered in a non-pornographic film of the time, is wince inducing. As is the first-base tutorial between Kathryn and the naive Cecile (Francine Cain).

It also casts a lens over the progression of social mores over the decades since the film was released, be it the homophobia intertwined with the gambit between the overtly queer Blaine (Euan Fistrovic Doidge) and closeted jock Greg (Joseph Spanti), or the casual racism shown towards Ronald (Rishab Kern) by Cecile’s mother (Fem Belling). Disappointingly, the issues are brushed aside rather than creatively explored.

But no one is here for the story. The setlist is a sentimentality-inducing score on steroids.

Featuring a smattering of songs from the original soundtrack, including Placebo’s Every Me Every You, the Verve’s Bittersweet Symphony and the Cardigans’ Lovefool, they’re accompanied by staples of the So Fresh catalogue such as Christina Aguilera’s Genie in a Bottle, Deep Blue Something’s Breakfast at Tiffany’s, Sixpence None the Richer’s Kiss Me and Boyz II Men’s I’ll Make Love to You.

With most shoehorned in clumsily, they’re delivered to varying degrees of success. As is the choreography, outside of a bombastic routine to *NSYNC’s Bye Bye Bye that would make Timberlake proud.

Weston’s two-tone delivery is stale and left to wither when commanding the stage solo, Burgess (when you could hear her) is far more punchy but lacking in range, while Kelsey Halge as Annette, is, ahem, No Doubt the strongest performer of the cast.

Credits must be given to stunningly morphing set design by James Browne alongside the video and lighting by Craig Wilkinson and Declan O’Neill respectively. But it’s not enough to carry a show that is essentially a ’90s cover band playlist on Spotify. Reviewed by Tyson Wray

The current incarnation of Trio Grande existed only on paper until a couple of hours before the band’s first Melbourne show on Saturday night. With guitarist Gilad Hekselman and guest drummer Eric Harland flying in from the US to meet up with Sydney-based saxophonist Will Vinson on the day of the gig, there was scant time to rehearse.

Yet from the opening notes of their first tune, the three exuded an extraordinary chemistry and cohesion. Perhaps it wasn’t so extraordinary, since Harland has worked individually with Hekselman and Vinson for many years and has a chameleonic ability to adapt to any musical setting.

Still, it was impossible not to feel a sense of awe as these remarkable artists came together as a trio for the first time, generating a collective energy that was as joyful as it was potent. And while their quicksilver reflexes allowed them to lock in tight when required, they also revelled in the freedom of the unknown.

On Saturday night they played two back-to-back shows, each with sold-out, rapturous audiences. Both shows focused on compositions by Vinson and Hekselman (the trio’s pre-existing members), anchored by strong themes that the trio could stretch or set adrift at will.

Hekselman and Vinson also used pedals and effects to expand the textural possibilities of their instruments. On Scoville, Hekselman produced both crunchy distortion and syncopated basslines, with Vinson’s sax morphing into an ecstatically funky wah-wah guitar and Harland’s thunderous rolls propelling the tune into jazz-rock territory. Long Way From Home sounded like a prog-rock version of a spaghetti western theme, before dissolving in a sea of mysterious synths.

And while much of the music brimmed with fire, there were plenty of moments where it drifted and flowed – as on the encore, Will You Let It? with its gently chiming guitar, gliding sax and murmuring cymbals. The audience sighed, then erupted, thrilled to have shared this journey of discovery. Reviewed by Jessica Nicholas