Queensland's daily tally of new COVID-19 cases has risen from two to three as health officials confirm another crew member aboard a cargo ship off the state's coast has tested positive.

Earlier on Friday, Premier Annastacia Palaszczuk said one crew member aboard the cargo ship had tested positive but subsequent testing of the rest of the crew later revealed another infected patient. 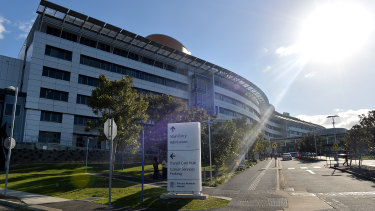 Three existing COVID-19 patients connected to a trip to Melbourne last month have also been released from the Princess Alexandra Hospital.Credit:Bradley Kanaris

Queensland Health said in a statement both crew members would be transferred to shore and admitted to Townsville University Hospital. All other crew tested negative.

There are nine active COVID-19 cases in Queensland and the state's overall total stands at 1092.

Two women who returned from a trip to Melbourne last month and tested positive for COVID-19, as well as one of the women's family members who contracted the virus as a result, have been released from hospital.

Queensland Health confirmed on Friday all three had been assessed, determined to no longer be infectious and discharged from the Princess Alexandra Hospital.

Olivia Muranga, 19, and Diana Lasu, 21, returned to Brisbane from Melbourne together on July 21, via a stopover in Sydney to catch a connecting flight. They were later confirmed as COVID-positive.

The pair visited schools, restaurants, shops and a medical centre in the Brisbane and Logan communities while infectious for eight days, sparking a public health emergency.

Haja Timbo, 21, also travelled with the pair, but tested negative for the virus upon her return.

A 22-year-old woman, the sister of one of the trio, tested positive for the virus after contact tracers identified her as a close contact.

Ms Lasu, Ms Muranga and Ms Timbo were all charged with fraud after they allegedly failed to declare their Melbourne holiday to border officers at Brisbane Airport upon their return.

They were also separately accused of illegally hosting a party in Melbourne's CBD that resulted in two arrests and $30,000 worth of fines, during their trip to Victoria.

They are due to appear in the Brisbane Magistrates Court on September 28 and face fines of up to $13,345 and a maximum of five years behind bars if found guilty.

Morata passes medical at Juventus
Simeone plays a key role in the transfer of Suarez to Atletico
The Agent Of Gareth Bale: In real Life, Gareth was treated differently. I hope there will be no question of a return
Micah Richards: People write: Richards only works live because of BLM. I achieved this through hard work
The former Director of Barca: Martino said Messi: I know that if you call the President, he will throw me out
Liverpool are in contact with Mbappe's entourage and will compete for him with Real Madrid next summer
Carragher on de Bruyne: Next after Messi and Ronaldo. This is the best player in the Premier League
Source https://www.smh.com.au/national/queensland/three-new-queensland-cases-confirmed-as-logan-trio-leaves-hospital-20200814-p55lva.html?ref=rss&utm_medium=rss&utm_source=rss_feed