A number of brutalist buildings from the 1970s have recently come into fashion.

Chunky and often monumental, these concrete edifices are finding a new and often younger audience who didn't go through this decade. 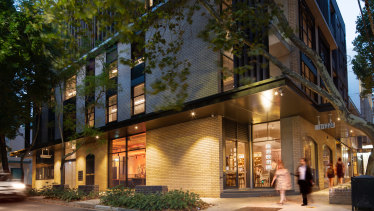 However, 44A Foveaux Street in Surry Hills, Sydney, would certainly not fit into this category.

"To say it was ugly would be too kind," says architect Philip Thalis, Principal of Hill Thalis Architecture.

Wedged between Foveaux and Belmore streets, the 1970s three-storey brown-painted brick building has received two new levels, and a complete makeover in the process. 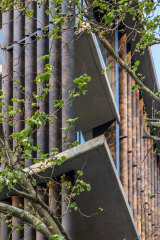 The architects' client, Laoutaris Constructions, was initially contemplating transforming the building into apartments, with retail at ground level.

However, research at the time suggested a greater need for commercial offices, but not the ones inherited.

"It was an awkward combination of spaces, with partitions dividing up spaces in an ad-hoc way.

"We also discovered the ground floor was originally a garage from the 1920s, 'buried' in the 1970s structure," says Thalis.

Some of the main problems with the 1970s building were the lack of windows, a few slithers in the wall, no lift (although three levels is doable without one) and – importantly – no sense of the outdoors.

Given the leafy environment, with oak and jacaranda trees in Belmore Street, and established plain trees in Foveaux, this seemed a lost opportunity.

Rather than expressing each level, it used a series of external blades to make two floors appear as one and thereby reduced the building’s scale.

These copper-coloured blades also function as filters for the sunlight, in particular the orientation in part to the west.

The brown paint used on the original building was also removed to reveal a sand coloured brick that creates a more contemporary edge.

A new point of entry, via a double-height void, is also more welcoming.

“"We had to retain the original brick arches [at ground level] as there was far too much concrete involved, says Thalis.

The interiors have also been completely reworked, with the removal of false plaster ceilings allowing the ceilings to increase from 2.7 metres in height to almost 3.5 metres.

The exposed ducts and services are now revealed against the concrete ceilings. The polished concrete floors also allow for a more industrial aesthetic.

As individual tenancies occupy each floor, no one layout is identical.

Some have used the core as an informal seating area, with workstations arranged on the perimeter to create a sense of being in the treetops.

Other offices have a dedicated recreation area.

Bathrooms were updated and a lift installed, although those working on the lower levels tend to use the stairs.

One thing they all share are the opportunities to enjoy the outdoors, whether this takes the form of a terrace, a courtyard, a balcony, or a combination of all three.

The office located on the top-level benefits from a generous terrace that accommodates seating for a dozen people, which is used for meetings or simply a place to have lunch.

A retractable canvas awning can also be drawn back to enjoy a greater connection to the elements.

The ground floor now includes a Korean restaurant, Tokki, along with a takeaway coffee spot.

It's no longer the downtrodden and "shabby", but a smart new office building that attracts a creative cohort.

"It made economic sense to rework the building rather than simply starting from scratch.

"The rental is considerably greater and this is a much more sustainable option," says Thalis, who received a commendation from the Australian Institute of Architects (New South Wales Chapter) for his efforts.

Those who walk past 44A Foveaux will also appreciate that the result isn't simply a building that's been added to, but has been – as Thalis says – "needled together" through both the existing and added fabric.

Kramaric scored the 74th goal in the Bundesliga, breaking Olic's record among Croats
Suarez has 12 goals in his first 15 games for Atletico - the best start in La Liga for a new club since Ronaldo
16-year-old Small - the youngest player in the history of Everton
Solskjaer on 3-2 with Liverpool: Manchester United won on their own terms. It's a good feeling
Hames scored 10 (3+7) points in Everton's home matches. Away - 0
Suarez scored his 12th goal of the La Liga season. Messi has 11
Miller on the Manchester United defeat: Devastated. There is no second chance in knockout football
Source https://www.theage.com.au/business/companies/to-say-this-brutalist-building-is-ugly-would-be-too-kind-20201119-p56g5c.html?ref=rss&utm_medium=rss&utm_source=rss_feed

JoJo Siwa opens up about being part of LGBTQI community: ‘I am just so happy’

Warnings as mercury rises across Victoria

Apple to produce niche, expensive VR headset before moving on to AR

Why now is the time to buy this SUV

Your Daily Horoscope for Monday, January 25

Mind game helped me lose 24kg in a year

‘Challenging and dangerous’: Severe fire risk ahead after stifling night

Church buildings for sale at $15k

Plot thickens in tennis ‘photo of the year’

Teen star comes out to fans

Bills Fans Parade Through Buffalo Ahead of AFC Championship Game

Vaccines may not work as well on virus variants: UK Health Minister

Arrest made as 300 fireys battle through the night