Indiana A convicted murderer was executed in the United States on Thursday, in the second federal execution in a week after a 17-year pause, over objections by his lawyers that he had dementia and no longer understood his punishment.

Wesley Purkey, 68, was convicted in 2003 in Missouri of raping and murdering 16-year-old Mary Ruth Bales before dumping her dismembered and burned remains in a septic pond. 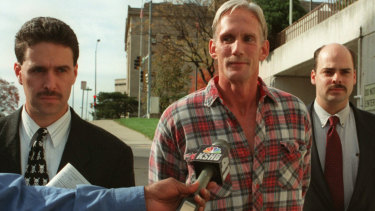 Wesley Purkey pictured in 1998 at his arrest for the rape and murder of a 16-year-old girl.Credit:AP

The execution had been blocked by a federal court, but the US Supreme Court on Thursday overruled it, just as it had done in another case on Tuesday, once again putting the federal government back in the business of executing prisoners.

Purkey was pronounced dead at the Justice Department’s execution chamber at the federal prison in Terre Haute, Indiana, the spokeswoman, Kristie Breshears said by phone.

His lawyers had argued he had brain damage and dementia caused by Alzheimer's disease. They said that although he had accepted responsibility for his crime, he no longer understood the reason for his execution and that killing him would breach the US Constitution. 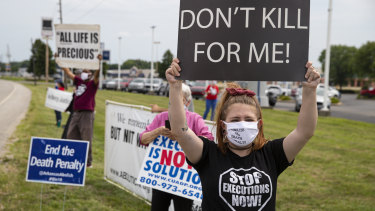 Protesters against the death penalty gather in Terre Haute, Indiana, before Purkey's execution.Credit:AP

Before Tuesday, when the Justice Department executed convicted killer Daniel Lee in Terre Haute, the federal government had executed only three people since 1963, all from 2001 to 2003.

Lee had joined Purkey and other death row inmates in lawsuits challenging the legality of the government's new one-drug lethal-injection protocol using pentobarbital, a barbiturate, which the Justice Department announced a year ago, replacing its three-drug protocol.

A federal judge agreed with a medical expert cited by the condemned men's lawyers that the drug was likely to breach a constitutional ban on "cruel and unusual punishments" by causing a painful drowning sensation as bloody fluid filled their lungs before they lost consciousness.

In Romania, a special champion: everything was decided in the match, the format of which was chosen 3 hours before the whistle
Danny rose: I was stopped by the police last week: is This a stolen car? Where did you get it?. And this happens regularly
Barcelona refused to sell for 60 million euros Trinca u, bought from Braga for 31 million. The club count on him
Chelsea will compete with Everton for Regilon. Real Madrid is ready to sell him
Espanyol asked La Liga to cancel the flight. The Catalans have been in the relegation zone since the fifth round
Inter have not yet decided on Conte's future. Everything will be decided after the Europa League
Haji resigned as Viitorul's coach
Source https://www.theage.com.au/world/north-america/us-carries-out-second-federal-execution-in-17-years-20200716-p55cv5.html?ref=rss&utm_medium=rss&utm_source=rss_feed