US may send navy ship through Taiwan Strait

Washington: The United States is considering sending a warship through the Taiwan Strait, US officials say, in a move that could provoke a sharp reaction from Beijing at a time when Sino-US ties are under pressure from trade disputes and the North Korean nuclear crisis.

A US warship passage, should it happen, could be seen in Taiwan as a fresh sign of support by President Donald Trump after a series of Chinese military drills around the self-ruled island. China claims Taiwan as part of its territory. 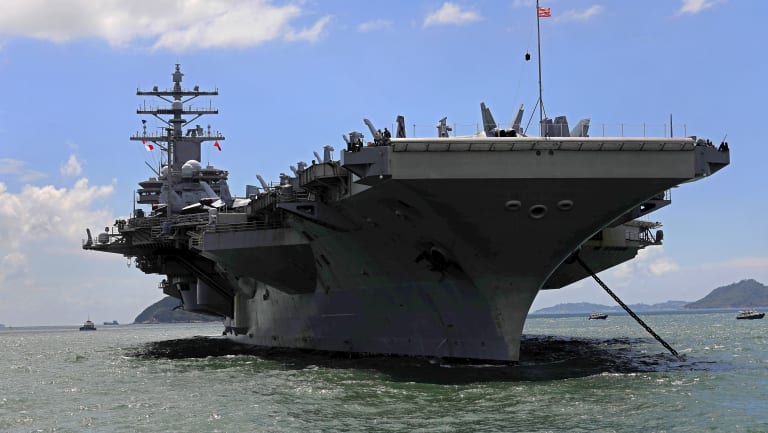 US officials told Reuters that the United States had already examined plans for an aircraft carrier passage once this year but ultimately did not pursue them, perhaps because of concerns about upsetting China.

The last time a US aircraft carrier transited the Taiwan Strait was in 2007, during the administration of George W. Bush, and some US military officials believe a carrier transit is overdue.

Another, less provocative option would be resuming the periodic, but still infrequent, passages by other US Navy ships through the Strait, the last of which was in July 2017.

The Pentagon declined comment on any potential future operations and it was unclear how soon a passage might take place. 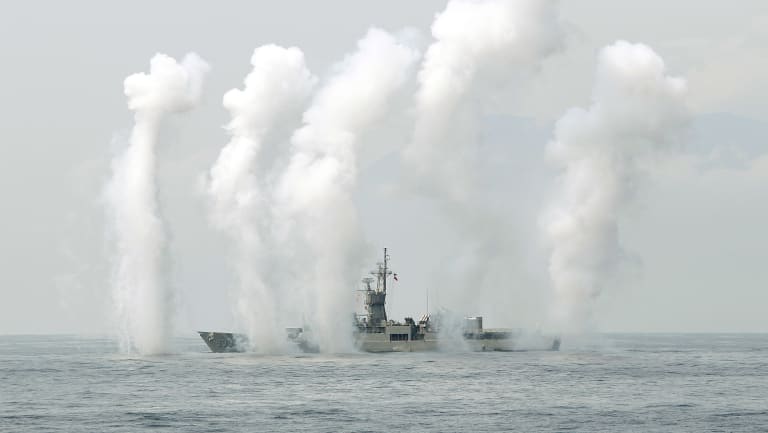 A Taiwan Navy's Knox-class frigate fires chaff during a navy exercise in the bound of Suao naval station in Yilan County, northeast of Taiwan.

Trump, who broke protocol as president-elect by taking a phone call from Taiwan's president in 2016, has toned down his rhetoric about Taiwan in recent months as he seeks China's aid in the nuclear standoff with North Korea.

The United States and China are also trying to find their way out of a major trade dispute that has seen the world's two economic heavyweights threaten tit-for-tat tariffs on goods worth up to $US150 billion each.

China has alarmed Taiwan by ramping up military exercises this year, including flying bombers and other military aircraft around the island and sending its carrier through the narrow Taiwan Strait separating it from Taiwan.

"They're turning up the heat," a fourth US official said, speaking on condition of anonymity to describe the US view of Chinese activities around Taiwan. 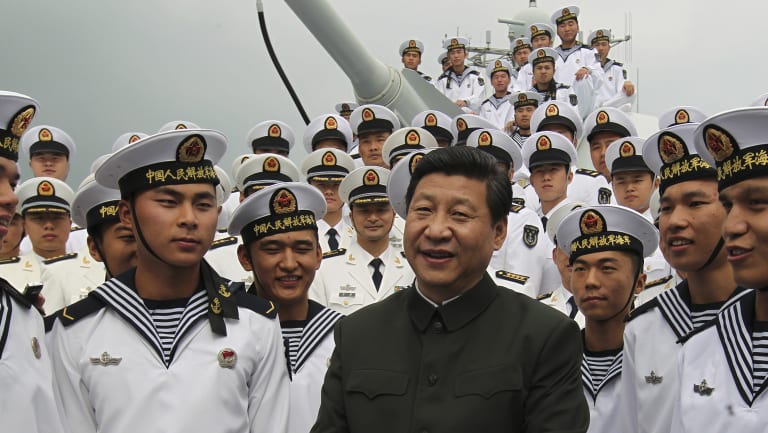 Xi Jinping, centre, talks to sailors onboard the Haikou navy destroyer during his inspection of the Guangzhou military theater of operations of the People's Liberation Army in Guangzhou, China.

Separately, it now appears unlikely the United States will send top officials to a June 12 dedication ceremony for the new American Institute in Taiwan, America's de facto embassy in Taiwan. Washington does not have formal ties with Taipei.

US officials told Reuters that the date clashes with the planned June 12 summit between Trump and North Korean leader Kim Jong-un, but added there will be another opportunity to commemorate the institute's unveiling in September.

Since taking office, Trump has approved a $US1.4 billion arms sale to Taiwan and angered Beijing by signing legislation encouraging visits by senior US officials to Taiwan. Trump also named John Bolton, known as a strong Taiwan supporter, as his national security adviser.

The fourth US official told Reuters Washington aimed to change the way it approaches arms sales requests from Taiwan to address them on a case-by-case basis, as opposed to bundling them together.

Rupert Hammond-Chambers at the US-Taiwan Business Council trade association said moving away from bundling - a practice in place for a decade - would be better for Taipei's defence needs, treating it more like a regular security partner.

"We get into difficulty when we treat Taiwan differently, which opens the door for the politicization of the (arms sales) process," Hammond-Chambers said.

Military experts say the balance of power between Taiwan and China has shifted decisively in China's favour in recent years, and China could easily overwhelm the island unless US forces came quickly to Taiwan's aid.

The United States is bound by law to provide Taiwan with the means to defend itself, but it is unclear whether Washington would want to be dragged into war with China over the island.

Asked about US obligations to Taiwan, Pentagon spokesman Lieutenant Colonel Christopher Logan noted Washington has sold Taiwan more than $US15 billion in weaponry since 2010.

"We have a vital interest in upholding the current rules-based international order, which features a strong, prosperous, and democratic Taiwan," Logan said.

Real Madrid is ready to terminate the contract with Bale, paying him a salary for two years (ABC)
Manchester City were preparing for a meeting at CAS before UEFA issued a decision to ban them from the Champions League
Zidane about Hazard: This is a difficult situation. I hope that on Thursday he will be ready for 100%
Nemanja MATIC: I Think Manchester United deserve a place in the Champions League. If we win three games, we will get there
Wycombe reached the championship for the first time in 133 years. Akinfenwa (Yes, that Jock from FIFA) is going crazy-he was personally congratulated by Klopp
Manchester City intends to sign Lautaro, alaba and Coulibaly after the cancellation of the ban on European competitions
Griezmann suffered the first muscle injury of his career. Earlier, Barca players were dissatisfied with the medical staff
Source https://www.theage.com.au/world/asia/us-weighs-warship-passage-through-taiwan-strait-20180605-p4zjha.html?utm_medium=rss&utm_source=rss_feed

Fitzsimmons to be questioned on record bushfire season at royal commission

Why Women Kill has sex, death and infidelity ... but does it work?

Wounded ME bank boss surprises board with speedy exit

Man pleads not guilty to murdering woman in her home

More than a months' salary for a COVID test? Welcome to Indonesia

More than a month's salary for a COVID test? Welcome to Indonesia

Pubs that flout new COVID-19 rules must be shut down

The heartfelt humour and sorrow in an unopened letter, set to music

Storm face being without six starters for Titans clash

'Start of the new era': Campaigners welcome end of Redskins

More than 40 years in the making: Read the Palace Papers in full

'I fell asleep': Zerafa says Tszyu is dull and trades on his name

Grant: I’ll go back to Storm

'If we have to go it alone, we will': But O'Neill believes New Zealand and Australia need each other

AFL player of the year: Round six votes

Metropolitan soccer comps called off but hope for juniors in September

After 31 years of dancing, a step forward to choreography

Lawrence: We’ll do whatever it takes

Hundreds of Victorians to be hospitalised in next fortnight: Chief Health Officer

Private ‘treehouse’ has own waterfall

All hail Peter V'landys: Controversial NRL changes get thumbs up in Players' Poll