Sadly, another two Victorians have died, bringing the state's death toll to 802.

Friday's figures bring the state's 14-day average, tied to the next stage of easing lockdown restrictions, to 13.2 new cases per day, due to the inclusion of three cases listed as "overseas, interstate or no fixed address".

For Melbourne to move to step three of the government's road map out of lockdown, the statewide 14-day average needs to be five or less.

There also needs to be fewer than five "mystery" cases statewide – those without a known source of infection – over the prior two weeks for restrictions to be eased further.

Deputy Chief Health Officer Allen Cheng said mystery cases have emerged far and wide across Melbourne, although they have been halving week-on-week for the past four weeks.

According to the Department of Health and Human Services website on Friday morning, the number of mystery cases from September 16 to September 29 was 14.

"It is important to note that these mystery cases are in 14 different local government areas, so they are widely distributed and ... it just reinforces the need for people with symptoms to come forward for testing wherever they are in Melbourne," Professor Cheng said.

More stores at Chadstone Shopping Centre have been identified as high-risk exposure sites by the Health Department following an outbreak that has infected at least eight people.

Woolworths, Aldi and Jasper Coffee at Chadstone Shopping Centre have been added to the state's list of high-risk COVID exposure sites, as well as Chemist Warehouse on Toorak Road in Burwood and Leo's Fine Food and Wine Supermarket.

Meanwhile, the City of Melbourne is painting three-metre large "physical-distancing circles" in four inner-city parks to encourage social distancing during spring and summer.

The circles will be painted on the grass in Princes Park, Flagstaff Gardens, Kings Domain South and Buluk Park in Docklands from Friday morning. The circles will help ensure single people or those in groups will be at least two metres apart while enjoying the spring sunshine. 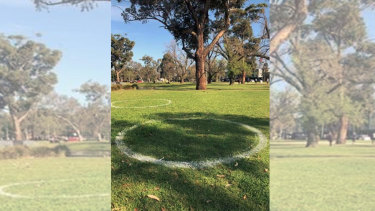 Under current Melbourne's current lockdown restrictions, groups of up to five people from two different households can spend two hours together outside.

Geelong is already trialling the measure and earlier this week Stonnington council painted circles in parks near its Chapel Street precinct. 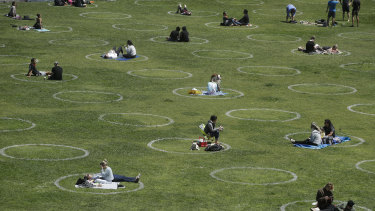 Gareth Bale: I want to be loved and appreciated. I will give my all for Tottenham
Eugene Giner: I don't see the point in inviting Messi to the RPL. Let's first make the League at least at the level of Spain
Pique agreed to a 50% pay cut at Barcelona until the end of the season
Ex-Rostov defender Bashtush moved from Lazio to Saudi al-ain
Schwartz about Dynamo: The impression of the training base is excellent
Metz forward Gyan is the best player in Ligue 1 in September. He is the leader of the goalscoring race
Miranchuk is able to play in almost any club in the world. Ex-midfielder Loko Drozdov about Atalanta newcomer
Source https://www.smh.com.au/national/victoria/victoria-s-daily-covid-19-tally-back-in-single-digits-with-seven-new-cases-two-deaths-20201002-p561a5.html?ref=rss&utm_medium=rss&utm_source=rss_national

2020 hindsight: how the AFL found a way through the season

The slice of history awaiting Panthers at top of NRL mountain

'You're seeing the results': How Hughes made success of succeeding Cronk

My way then the highway: If this is the end, it's a grand finish for champions of their codes

WA in ‘no rush’ to reopen border

‘He’s a s***head’: Whittaker opens up on secret UFC rivalry

It's Richmond v Geelong in Brisbane, but fans try to make the best of it

'Painful, agonising and kind of amazing': Aussie chefs in London fed a moving feast of restrictions

Anti-lockdown protesters clash with police at Shrine of Remembrance

Aussie legend: It’s who we are as a country

The end of democracy? If Trump loses, Trumpism still wins

Progress on bringing Australians home offset by others joining waitlist

How Winx made Waller fall in love with Cox Plate

Mug’s revenge: Finally a Pandemic worth cheering about!

Boom Sydney recruits on why they chose the Thunder

ASIC scandal expense puts chairman and deputy in the gun

ASIC expense scandal puts chairman and deputy in the gun

Premier gave $40,000 from her discretionary fund to Daryl Maguire's electorate

'Don't read too much into it': Roosters brush off underdog claim by Broncos before grand final

'Don't read too much into it': Roosters scoff at underdog claim by Broncos before grand final

'What did he take?': nurse gave overdose drug to inmate dying of asthma

'The idea was always to intervene': Sacha Baron Cohen on that Rudy Giuliani scene

'It was terrible work': 20 years on, horses' cull still a bitter political issue

One bridge I could never burn, no matter how hard I tried

NRL grand final: A moment to savour for all sports fans

Best bets: Why the Tigers will win a close Grand Final

Tee off at a world renowned golf course for $10m

A tale of two coaches: A greater legacy awaits either Scott or Hardwick

Ablett and Dusty: behind the great unknowns

Poll Call: Qld will work to have borders open by Christmas

From farm to new estate in two weeks

How the iPhone 12 compares to Google and Samsung's latest phones

Cats will need to prise flag from Richmond's grip: Selwood

Notes on a scandal: How Penrith pulled themselves back from the brink

Digging into the sodden mud of the Fens

Hammer hits the right spot with a tale of corporate crime

Here comes Martin, but has something gone Amis?

What's the story with women and the Nobel prize?

Over 10 years, Sydney has lost much. But have we become kinder?

No sculpture at Bondi? Manly, Wollombi and Mudgee offer a fix

The Boys is a brilliant takedown of Marvel, DC, and our need for supermen

Ask a Reporter: Are there restrictions on canvassing at polling stations?

We aren't family: the adults 'divorcing' their parents

Nathan or Ivan? Which Cleary is the most important to Penrith

Please Explain podcast: Why is the government investigating Australia Post?

'Back to square one': despite cries for change, Hariri tapped to lead

AFL grand final 2020: Gabba finale the fairytale of a season to celebrate

Magic Wand out of Cox Plate