Thirteen years after former prime minister Julia Gillard was called barren by Liberal Senator Bill Heffernan, the word has been levelled against a female Nationals MP in the NSW Parliament.

Cootamundra MP Steph Cooke, who does not have children, said it was "personally offensive in the extreme" to have her actions described as "barren" by Shooters MP Phil Donato.

Mr Donato used the term in a statement to the Legislative Assembly on Tuesday evening, as he objected to Ms Cooke amending his motion urging the government to install a supervised school crossing in Canowindra in his electorate of Orange. 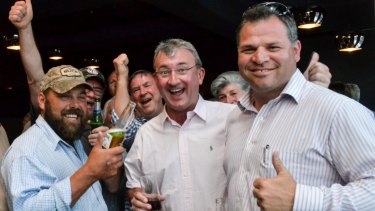 "Considering that my motion was regarding the issue of the safety of children, the amendment by the member for Cootamundra was not noble, not conscionable and barren of any consideration of children—those who are the most precious and vulnerable," Mr Donato said. 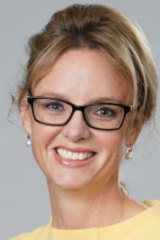 Cootamundra MP Steph Cooke said it was "offensive" to have her actions described as "barren".

Mr Donato's complaint dates back to November when Ms Cooke moved an amendment that, in effect, deleted Mr Donato's motion and replaced it with sentences endorsing the government's "commitment to the road safety of school students across the state".

An emotional Ms Cooke responded to Mr Donato in the chamber on Wednesday, describing it as a "highly personal and vulgar attack" and "extremely distressing".

"I might be small in stature. I may be childless but that doesn't mean that I am bereft of a burning desire to protect children and better the lives of the people of NSW," Ms Cooke said.

Mr Donato claimed that his words had been "taken out of context".

"I do apologise if she has taken offence to them. That wasn't the intention," Mr Donato said.

Speaking at a press conference where she was supported by Deputy Premier John Barilaro and Minister for Women Bronnie Taylor, Ms Cooke said she believed Mr Donato had deliberately deployed the term.

"There are a million words you could choose when describing the issue at hand," Ms Cooke said.

"It was very very deliberate."

Mr Barilaro said a fundamental shift was still needed in terms of respecting the decisions women made in regards to having a family.

"For Steph, the reasons are real, private and very sensitive," Mr Barilaro said.

Barcelona announced Suarez's move to Atletico
Barcelona will receive 2 million euros for the transfer of Suarez in the seasons when Atletico reaches the 1/4 finals of the Champions League
Chelsea's newcomers came off in the League Cup: Havertz scored a hat-trick (the first of his career), Chilwell an assist, Silva played an hour
Manchester United will lose 139.39 million pounds if the Premier League season is held without spectators - the most in the League
Ruediger - Barcelona's priority transfer target
Arsenal have won 6 matches in a row
Inter midfielder vesino is In talks with Napoli. He was offered to Zenit
Source https://www.smh.com.au/politics/nsw/vulgar-attack-nsw-national-mp-steph-cooke-hits-back-at-barren-comment-20200805-p55iv6.html?ref=rss&utm_medium=rss&utm_source=rss_feed

Virus rules to be eased ‘immediately’

As it happened: Freeman into the final, Takahashi's marathon effort

Why are there unexploded bombs in the Pacific islands?

'Band-Aid's coming off': $250 a fortnight cut from welfare payments

Trump wants to show China the art of making a deal

'They get young people into smoking': Doctors hesitant to prescribe vaping

The surprise moment Fyfe told Dockers rookie he was No.1

'Gangster attitude has to stop', police warn as two charged with murder in Surfers Paradise

Prince Harry urges Americans to 'reject hate' in US election

Coronavirus updates LIVE: More restrictions to be eased in Victoria this weekend as South Australia opens its border to NSW residents

Assange could crochet and play bingo in supermax prison, US prosecutor claims

Emma Stone gets married in secret

How to make a classic chocolate cake for just $2

Give yourself the perfect spring pedicure at home

The most brutal betting story of 2020

Muck-up plans show boys see themselves above the law

'Trying to calm the farm': Coalition in talks to prevent Koala War II

A quarter of workplaces saw productivity improve during COVID-19. The same number saw a drop

Your Daily Horoscope for Thursday, September 24

From the Archives, 1988: Fastest man on earth a drug cheat

Clean sweep in Noosa saves money and the river

The truth about working from home in Queensland

Gympie man who had sex with 13yo in public park jailed

Non-aligned MP to rerun on her ‘can do’ record

Smaller Sydney Festival will go ahead with more local flavour

Meteoric rise is talk of the legal fraternity

Stokes' win on the home front

In a dry landscape, this haunting Drysdale could set a new record

The model was obsolete when the project began

House prices: the sleeper issue that threatens our economy now

There will be no return to a pre-COVID world; it has changed forever

15 minutes to diagnosis: the quick COVID test that could 'change the game'