Late last Thursday, on the eve of the AFL grand final public holiday, Victoria’s Department of Health and Human Services issued a statement likely to have a significant impact on how journalists report on the government’s handling of the state’s second wave of coronavirus.

DHHS announced that a public servant had been referred to the police for leaking a draft of a government document detailing the road map out of restrictions. 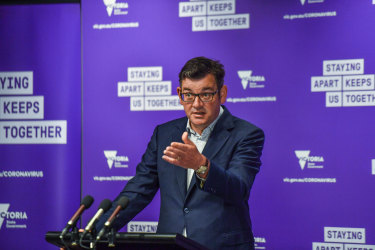 In September, the Herald Sun reported the draft, dismissed by premier Daniel Andrews at the time as having “no status”, even though it proved to be remarkably accurate.

In normal times, a decision by a government department to refer one of its own employees to the police for leaking to the media would spark a larger conversation about freedom of the press. But the timing of the news meant the story didn’t attract enormous attention.

When I tweeted about it I was surprised at the number of people who expressed support for the referral to police. Perhaps naively, I thought that kind of people who follow me (they tend to be more left-leaning and generally supportive of the role journalism plays in society) would understand the consequences of a police investigation into a leak to journalists.

On reflection, I realised the ambivalence could probably be explained by two things: the fact that the story in question was published by the Herald Sun, a publication many believe is waging an ideological war against Andrews’ government, and more broadly, a growing distrust of the media.

The conversation has come at a time when journalists and their audiences are already locked in a tense and at times quite aggressive debate about how the media is covering the most important story in recent history.

If that debate has gotten to a point where people who generally stand up for the freedom of the press, and the need for greater transparency in government, are now shrugging their shoulders and saying “Meh” when journalism is effectively criminalised then we have a problem. And it’s one we need to fix.

I understand there’s no love lost among many Victorians, particularly those who support the Andrews government, and the Herald Sun. I’m hardly the paper’s biggest supporter. Andrew Bolt wrote his first column attacking me as an “arrogant and contemptuous barbarian” when I was still at uni writing for the student paper. Nearly a decade on, he’s far from my biggest fan.

But this issue is bigger than one story in the Herald Sun.

As Martin McKenzie-Murray put it, the government is not your friend. Governments love control and abhor transparency. Information is kept tightly guarded, even when it’s in the public interest, and those who don’t play by the rules are punished. 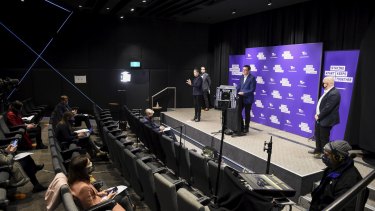 By referring this public servant to the police, the bureaucracy – and in effect, the government – is sending a warning to everyone else who might be thinking of releasing information into the public sphere: these are the consequences. It’s a concern because even if you don’t like the Herald Sun, and you didn’t think that story about a leaked road map was important, you don’t get to decide who gets locked up.

Much of our understanding of what went wrong in Victoria’s second wave has come about through the release of information the government wanted to keep secret.

The Age’s Chloe Booker has documented how DHHS tried to cover up one of the biggest stories of the pandemic, the fact that hotel quarantine had failed. But because people spoke up when they weren’t supposed to, the story ran. Hotel quarantine breaches were contained and it’s likely lives were saved.

Governments of all stripes, at all levels, are intensely secretive and hostile to the media. What is different this time is that a significant section of the public normally supportive of press freedom has also bought into this approach.

I experienced something similar to Booker when reporting on the continued use of vulnerable contract cleaners and security staff in the second iteration of hotel quarantine. Neither the government nor the companies involved would confirm any details, but sources inside the government passed on information that they weren’t supposed to. The story ran and hotel quarantine was reconfigured yet again.

It’s been a pattern throughout this crisis. Our understanding of the biggest issues, whether hotel quarantine, infections across vulnerable worksites, the way the virus spread rapidly among healthcare workers, or the lack of infection control in aged care, hasn’t come about because the government proactively released it.

It’s the result of reporting in direct opposition to what the government wants, and it’s only possible through the combination of those inside willing to speak up, and the journalists who work to get the story across the line.

In some ways this isn’t really new. Governments of all stripes, at all levels, are intensely secretive and hostile to the media. What is different this time is that a significant section of the public normally supportive of press freedom has also bought into this approach.

When I reported details of the outbreak at East Preston Islamic College hours before the government had shed any light on why thousands of residents had received messages about the need to get tested if they lived in the northern suburbs, I was again surprised that many people accused me of undermining the “public health message” or releasing information that didn’t need to be out there.

A few days on and the outbreak at the school has grown significantly and is now one the most closely watched stories in the state.

It’s normal and familiar to have governments and powerful corporations get angry when you report something they don’t want in the public domain. But experiencing regular bouts of hostility from the public, when reporting has been a crucial factor in reshaping how the government is handling this crisis, is a new phenomenon.

Again, I understand that there’s concern about the way some outlets report on politics, particularly News Corp publications. But The Saturday Paper, The Age, the ABC and Guardian Australia, all of whose reporters have been attacked and derided for their reporting during this pandemic, aren’t part of a right-wing media conspiracy to take down the government.

Journalism is one of the least trusted professions in the country. And most of that rests on mistakes made by those of us who practise it.

We’re far from perfect, and we probably continue to get some things wrong. But journalism is one of the few counterbalances we have to powerful institutions like government and businesses, whose decisions need to be scrutinised and held to account. When the public side with the powerful over journalists, we all lose.

Osman Faruqi is a journalist and the editor of Schwartz Media's daily news podcast 7am.

Ferguson on Rashford's charity: Fiction for a young man. He should give me some advice
A Preston player who twice touched an opponent's genitals was disqualified for 3 matches for aggressive behavior
Atalanta Director: everything is fine with Miranchuk, there are no symptoms of coronavirus
Kovid mocks the Latvian championship: the team got only 8 people (but still did not finish the match)
Gerard Pique: We all hope that Messi will stay at Barca
Agent of coronavirus from the Beginning: I feel fine. A test is a test
Barcelona has reached an agreement in principle with the players to reduce salaries. The club will save 122 million euros
Source https://www.smh.com.au/business/consumer-affairs/when-the-public-side-with-the-powerful-over-press-freedom-we-all-lose-20201025-p568bw.html?ref=rss&utm_medium=rss&utm_source=rss_feed

'Anything that starts will be difficult to control': Total fire ban for state's north

Property prices could keep falling as 'distressed' sales mount up

South Australia to reopen border to Victorians on December 1

'500 dinosaur bones out of 500': a father and son rate Sydney's newest exhibit

A haunting whodunnit – or is it?

Fiction reviews: The Good Sisters and three other titles

Is it a job? Is it well-paid? No, it's just the writing life

Guns, nudity and the odd horse: Chunky Move keeps us on our toes

Summary of fences: not just an open-and-shut gate

Your guide to the best Black Friday deals

The most important stories can be uncomfortable

‘He would be dead’: Grandad saved by passers-by

Relief on the way for Coast cops as border restrictions ease