Gov't aims to double rice production this year - The Scoop

BELAIT – The Ministry of Primary Resources and Tourism (MPRT) is aiming to double Brunei’s rice production in the next year to reach a 10 percent self-sufficiency target.

With the country’s largest rice cultivation site in Kandol, Belait to begin operations this October, the ministry is hoping that the introduction of better irrigation, agrotechnology and high-yield rice strains will boost the current output of 1,500 tonnes, which is just five percent of national rice self-sufficiency.

“With this new project [Kandol] and the introduction of hybrid rice varieties like MRQ or Sembada188… we can double the country’s self-sufficiency to 10 per cent at least”, MPRT minister YB Dato Seri Setia Hj Ali Apong told media during an inspection of the Kandol site on Thursday.

Darussalam Assets, the firm that manages all Brunei-government linked companies, is currently seeking joint venture partners or technical consultants to operate the 500-hectare Kandol site, which is open to development by both locals and foreigners.

Rice cultivation has seen mixed fortunes over the past 20 years, with farmers tackling problems such as high soil acidity and lack of irrigation infrastructure.

When asked whether the government would expand the land area for commercial rice production, the minister said any expansion must be sustainable, limiting agriculture’s impact on the environment.

“We have a number of [new] sites that we can open, but the question is do we really need it? We would have to sacrifice more of our rainforest, so the better option would be to increase the yield rather than to open new rice cultivation sites,” he said. 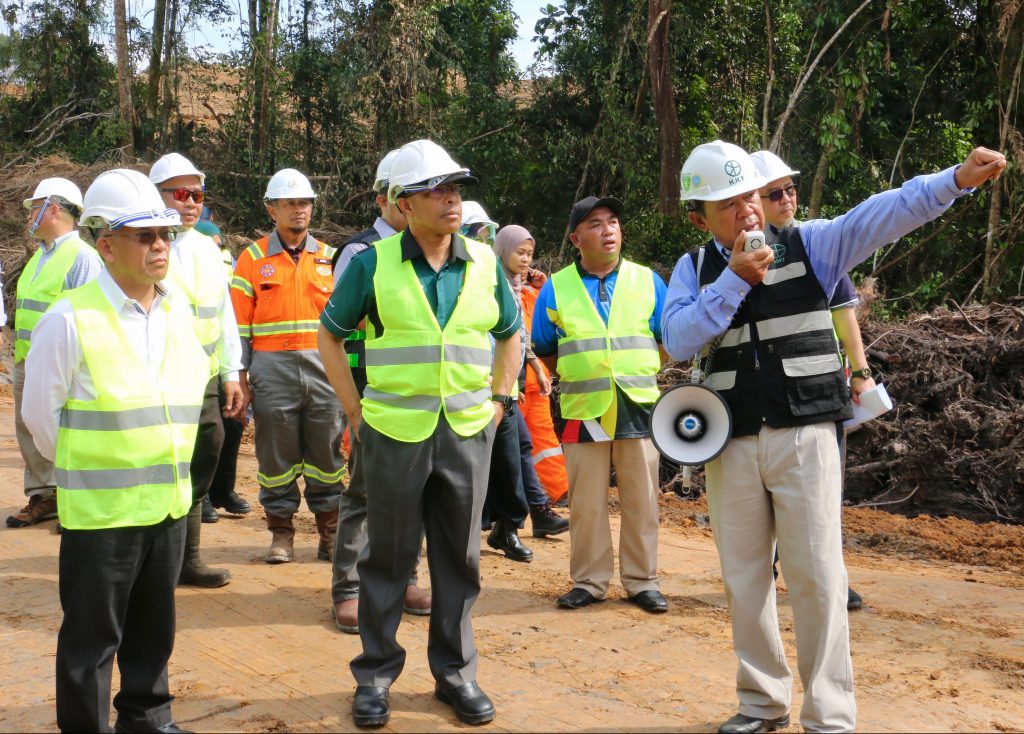 YB Dato Ali said the ministry is strengthening research and development into boosting rice production, examining a number of factors including climate, soil quality, treatment of crops and access to irrigation.

Last October, MPRT planted the first crop of Sembada188, a new high yield paddy variety that can produce around six tonnes of paddy per hectare.

The Titih variety — which can produce eight tonnes of paddy per hectare — is expected to be introduced to farmers next year.

The minister added that MPRT is working on several research projects with China’s Yuan Longping High-Tech Agriculture Co Ltd to create hybrid strains that can produce as much as 10 to 12 metric tonnes of paddy per hectare.

Field trials have already been conducted with the Chinese rice varieties but Brunei’s acidic soil has dampened output, with the hybrid strains only able to produce about nine metric tonnes of paddy per hectare.

“We are still working on it, the highest [we were able to achieve] was nine metric tonnes,” he said. “We want it to reach 10 to 12, most importantly to help farmers, to help them increase their yield without increasing their [operational] costs.”

Only half of the land area under rice cultivation has access to irrigation.

Farmers without access to irrigation can only grow traditional rice varieties, which on average produce about one or two tonnes of paddy per hectare.

The minister said the government is working on several projects to address irrigation issues, including the upgrade of Imang Dam, which feeds water to plantations in the Brunei-Muara district where about 80 percent of the nation’s rice is produced.

Gasperini on two penalties for Juve: They are above any rules in Italy. Did we have to cut off our hands?
Sarri Pro 2:2 with Atalanta: We played with one of the best teams in Europe right now
Pep Guardiola: Manchester City have won a place in the Champions League on the pitch. I hope that UEFA will allow us to play
Atalanta extended their unbeaten streak to 14 games and is ranked 3rd in Serie A
Ronaldo scored his 27th goal in Serie A, converting a penalty in the game against Atalanta. Immobile has 29 balls
Sterling scored 27 goals for the season and broke his record. He scored a hat-trick against Brighton
Three Atalanta players have scored 15+ goals in the Serie A season. This is the best result since 1952
Source https://thescoop.co/2019/07/20/govt-aims-to-double-rice-production-this-year/

Real Madrid in sight of title after beating Alaves

How to watch the Styrian Grand Prix in Southeast Asia

Brunei CPI increases by 2.5pc in May

Hundreds try to storm Serbian Parliament as protests heat up

The quest to find signs of ancient life on Mars

Singapore’s ruling party holds on to power but faces setback

Squash joins other sports in 3rd phase of de-escalation plan

Liverpool captain out for rest of season

All 5 former winners in same half of Champions League draw

Malaysian jailed for sneaking into Brunei, series of thefts

Highway by-passing Brunei must be priority after fee hike by sultanate, says politician

50 ASEAN scholarships on offer for students

Flag hoisted ahead of royal birthday