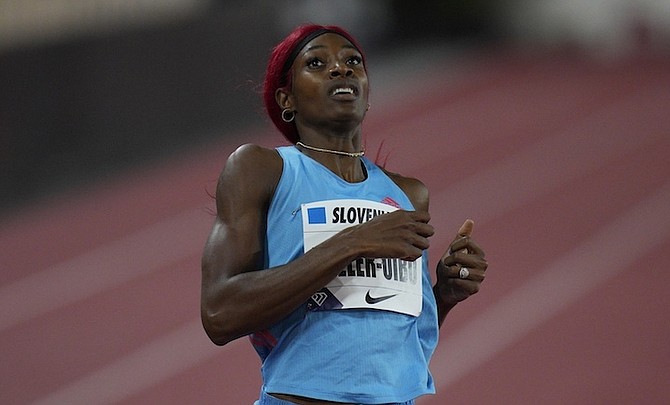 SHAUNAE MILLER-UIBO, of The Bahamas, wins the final of the 400 metres during the Diamond League athletics meeting at the Louis II stadium in Monaco yesterday. (AP Photo/Daniel Cole)

Although she indicated that she’s done running the 400 metres, two-time Olympic gold medallist and world champion Shaunae Miller-Uibo continued her quest for the 2022 Wanda Diamond League title by winning the women’s one-lap race in Monaco in grand style.

As one of two Bahamians competing in the meet yesterday, Miller-Uibo clocked 49.28 seconds for her victory, while Donald Thomas failed to clear any of his three attempts at the opening height of 7-feet, 2 ¼-inches or 2.20 metres in the men’s high jump.

Miller-Uibo, coming off her second place finish in the 200m on Saturday in Chorzow, Poland where she ran 22.35 behind Jamaica’s world champion Shericka Jackson in 21.84, was participating in her first 400m since she won the World Championships in Eugene, Oregon. Using her dominating 6-foot, 1-inch frame to obliviate the field as she ran out of lane four, Miller- Uibo made up the stagger on the majority of the field through the first 200m. She came off the final curve with a huge lead as she surged down the home stretch with no woman in sight.

As she started to slow down at the finish line, there was a race within the race for second place as Jamaica’s Candice McLeod trailed in a season’s best of 49.87 to hold off Commonwealth Games champion Sada Williams of Barbados in 50.10 for third.

“We tried something different tonight so I am grateful for the next victory. It has been a long season and we are pretty happy with it,” said the 28-year-old Miller-Uibo, who opted not to compete in the Commonwealth Games.

“To achieve 49.2, I think we did a really good job tonight. We gave it a good effort and overall I am very happy about this performance. I will just try to jump at the end of the season.”

With her victory, Miller- Uibo pushed her qualifying standard for the Wanda Diamond League Final in September to 22 points to trail Jamaican Stephenie- Ann McPherson, who got fourth in the race in 50.52 to maintain a slim lead with 25 points.

Athletes are competing for points in 13 series meetings from May to September, with the most successful qualifying for the two-day season finale in Zurich and a shot at the prestigious Diamond Trophy September 7-8.

Without landing a mark in the men’s high jump, Thomas has yet to get on the scoreboard with any points.

Winning the men’s title in the high jump was Mutaz Essa Barshim of Qatar as he edged out Woo Sanghyeok of Korea on fewer knockdowns on the countback after they both soared 7-6 1/2 (2.30m).

The 32-year-old Thomas, who just missed getting on the podium in Birmingham with a fourth-place finish, is coming off a sixth-place finish at the 12th Gyulia Istvan Memorial in Székesfehérvár, Hungary, after he was tied for sixth place with Péter Bakosi after they both cleared 7-0 1/4-(2.14).

The focus now switches to the Bahamas where the Bahamian athletes are expected to compete in the North American, Central American and Caribbean Championships August 18-21 at the Grand Bahama Sports Complex.

Following that, it’s back to the Wanda Diamond League for the next meeting in Lausanne on August 28.