‘No count’ on late disclosures

THERE has been a considerable increase in the number of officials who have filed their financial records, according to Public Disclosure Commission chairman Bishop Victor Cooper.

There was a report of some parliamentarians missing the deadline to meet annual disclosure requirements. Bishop Cooper has previously said that some first-time MPs were not aware that there was a legal requirement for them to file financial disclosures under the Public Disclosures Act.

When asked for an update on the matter, he told The Tribune yesterday: “I don’t have a count for you at this juncture. I can tell you that there has been a considerable increase in persons who have reported.

“There are a lot of persons who missed. They are now getting their information together and getting it in. Because it’s not just somebody writing it down. You’ve got to send verifiable documents, etc, to the disclosure. It’s not just a matter of sitting down and saying. It’s a process that requires an in-depth study of what you have with verifiable documents.

Asked to give a percentage of the collective number that have disclosed despite the deadline passing on March 1, Mr Cooper said he did not have that information on hand, adding: “But I know that people have been making a considerable effort to get their documents in.”

As for an absolute cut off point for those who have yet to file their records, he said: “There is no real cut off point per se, but since the indication that some may have forgotten, they remembered and they are getting their documents in and so we are very pleased to see that kind of thing happening, OK?”

“The law speaks to that and so once we are finished with what we are doing that information will be forwarded to the relevant authorities, the prime minister’s office, the leader of the opposition and then we’ll take it from there once we’ve gotten their advice on that.” 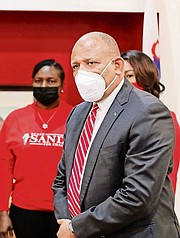 For his part, Free National Movement Chairman Dr Duane Sands said it appeared that the rules did not apply to all under the Davis administration.

“You asked the question about disclosure,” he said, “I think we are looking at an administration where the law applies only to subjects of the country and not to them. Let’s hope that all of the members of Parliament in particular who were required to disclose have disclosed.”

Asked if those who have not disclosed should be fined, he repeated his position on following the law.

“I think that you know people should be required to follow the law. The law should be upheld and whatever consequences arise from not adhering to the law, those consequences should apply,” Dr Sands said.