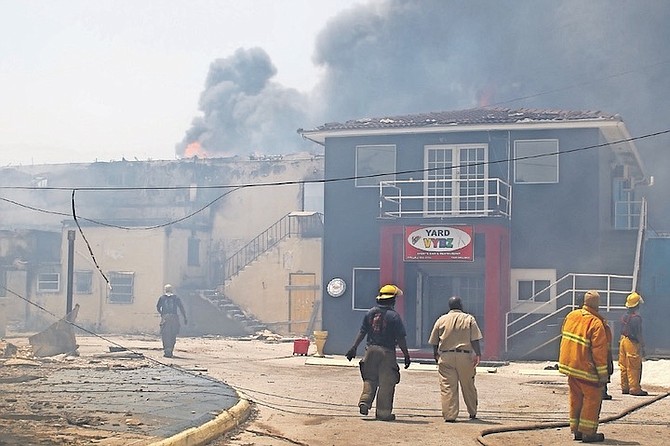 THE Grand Bahama Chamber of Commerce president says he is not surprised fires continually happen at the International Bazaar because vagrants have moved in and no one wants to take full ownership of the “derelict” property.

James Carey, told Tribune Business yesterday that the site where the International Bazaar sits is essentially “empty and derelict” in addition to it being a haunt for vagrants who live in the abandoned buildings.

Tuesday’s fire, he said,  could have started from any one of those vagrants lighting a fire to cook food or for lighting because there is no electricity running into the Bazaar.

Mr Carey said: “It is unfortunate that the Bazaar, which used to be the pivotal shopping area and particularly touristic, was allowed to fall into the state of disrepair that it has become.”

The Bazaar used to be owned by the Grand Bahama Port Authority, but they have sold off a lot of the individual buildings and there is no clear-cut owner or landlord for the Bazaar’s properties.

What has also led to the Bazaar’s demise is that when the GBPA divested itself of the property, they moved to the Port Lucaya area and have continued to develop that portion of Freeport as a “go-to Mecca,” leaving the Bazaar and its businesses to their own devices.

“This has been made incredibly more dire since the failure of the Princess Hotel and the closure of the Princess Casino, sounded a death-knell for the Bazaar area and a lot of the stores closed down and the properties were shuttered,” Mr Carey added.

“Over time the homeless people started gaining access and taking up residence. I don’t know why or how the fires started, but there’s no power to the area, so one has to suspect that persons inside have access to something and they are either cooking or they’re doing other things that are perhaps causing these fires.

“A number of the buildings in the Bazaar are owned by individuals and individual companies and in some instances I believe some store owners have purchased some of the buildings themselves, but the most profitable part of Freeport is in the Port Lucaya area now.

The Port Lucaya “contributed” to the demise of the International Bazaar in Freeport and it will take significant investment to bring the iconic brand back to proper standard. “The GBPA had essentially sold the Bazaar to different parties and then they built the Port Lucaya which was their flagship and now the Port Lucaya has been sold in its entirety as well and it’s no longer owned by the GBPA,” said Mr Carey.

It’s “hard to see” the International Bazaar ever coming back to being a premier property in the Freeport area because the properties are owned now by several different entities and will become a “legal tangle” trying to get them all on one page for one direction for the property.

Added to this, with the old Princess Hotel being in a state of disrepair in a location that is not on the beachfront, attracting an investor to take on that large property within itself will be a task because most of the store owners in the Bazaar depended on the Princess Hotel to drive some of their customers.

“No one wants a hotel in The Bahamas that is not near to a beach, who would want to buy a luxury hotel that is not built on a beach these days,” Mr Carey quipped.