IN the month since the American midterm elections, many in the US media, including long-time supporters Rupert Murdoch and his Wall Street Journal and New York Post, have been critical of the role played by ex-president Donald Trump in the disappointing Republican election performance in November. Several party leaders were critical of Trump’s recent dinner with an unusually scurrilous antisemite who is also accused of racist statements. This has reignited hopeful rumours among the liberal press that Trump’s hold on the GOP is weakening.

That’s not Trump’s only worry. Regularly these days, Trump’s continuing legal problems crop up in the news. It’s really not as though many people are overwhelmed by anxiety about his potential criminal jeopardy. Most Americans, whether they support him or not, seem to think that he’ll find a way to finagle his way out of trouble. His supporters are proud of his successful defiance of a legal system that continually threatens and often ensnares them. His enemies have watched him evade the legal consequences of his actions for quite some time now and many are largely resigned to his continued success.

But when you’re fighting on as many different legal fronts as Trump is, there will be setbacks. He got a potentially damaging bit of bad news when the US Supreme Court, packed with conservatives including his own three appointees, rejected Trump’s plea for an order that would have prevented the Treasury Department from giving six years of tax returns for Trump and some of his businesses to the currently Democratic-controlled House Ways and Means Committee.

It was Trump’s second loss at the Supreme Court in two months. In October, the nation’s highest court declined to intervene in Trump’s legal objections to the FBI’s raids on his Palm Beach estate that turned up large numbers of classified documents. This seems to cement the former president’s legal vulnerability in one of the two cases that Jack Smith will now take over as a Department of Justice-appointed Special Counsel.

An opinion rendered recently by the 11th US Circuit Court of Appeals in Atlanta in the classified documents case further and more broadly bodes ill for Trump. Here’s part of that opinion, issued by a court that includes a majority of judges appointed by Trump himself:

“Limits on when courts can interfere with a criminal investigation apply no matter whom the government is investigating. To create a special exception (in Trump’s favour) would defy our nation’s foundational principle that our law applies ‘to all, without regard to numbers, wealth, or rank.’

Maybe the long arm of the law is finally closing in on Trump. Maybe Republican leaders are finally prepared to defy him. Maybe. We’ll see. 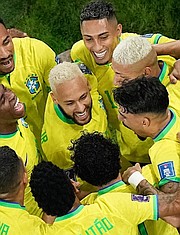 DAZZLING FOOTBALL ON THE BIGGEST STAGE

FOR the literally billions of soccer fans around the world, the race to this year’s World Cup quarter-finals offered some suspense but almost no surprises at all. Of the eight teams remaining in the chase for the ultimate sports crown, only the inclusion of Morocco really represents an upset. Tomorrow and Saturday, the original field of 32 will be winnowed to only four semi-finalists.

Here in The Bahamas, the English, American and Canadian teams likely attracted the most followers, so we’ll discuss them first.

It happens relatively infrequently these days, but occasionally the United States’ participation in an international event does not really register as particularly significant. We are witnessing such an occasion now.

The American men’s team won a key victory over Iran in the initial round-robin competition that allowed them to advance to the second half of the tournament, where they faced a superior squad from the Netherlands last Saturday.

That 1–0 American win over Iran, secured by an heroic effort from US talisman Christian Pulisic, was widely hailed in the American media, as was the team’s scoreless draw with the Three Lions of England several days earlier. It is one of the great anomalies of soccer that the English have never beaten an American side in the men’s World Cup.

But in truth, the US team is a second - or third-tier squad on the international stage, and not many were surprised when they fell to the Dutch on Saturday. Words like “determined, gritty underdogs” are not often applied to Americans, whether in sports, politics, war, cultural reach or economic might. But they have been used to describe the US team in Qatar.

In fact, the Americans are held in such general international disregard that when a disinterested-seeming English team could not manage a win against them in the preliminary round, the Lions were booed off the field at the end of the game by their notoriously boisterous travelling fans. The English, as expected, ultimately won their group and proceeded to the next stage of the competition, dispatching African champions Senegal with relative ease. Now England faces defending champions France this Saturday.

If the English do manage to beat France in what should be a fascinating match, they would stand on the precipice of an historic achievement. A victory over the French will ensure a trip to the tournament semi-finals, where they will be favoured. The English have not won a World Cup since 1966.

One of the biggest disappointments of the World Cup so far has been the departure after the first round by Canada. This team, ranked 41st in the world before the competition, had blazed through qualifying rounds in North America’s CONCANAF in terrific style, jumping both the US and Mexico in the standings, and there was much optimism surrounding their second-ever World Cup qualification. The other was in 1986.

Canadian fans can take some solace in the fact that their heroes have already qualified for the next World Cup in 2026: Canada, along with the US and Mexico, has won the right to host the event, which confers automatic qualification for the tournament.

Back to this year. The best match of the next two days is likely to feature England and France, who play on Saturday. Both sides are missing some key players, with the most notable absentee on either side being French midfielder N’Golo Kante. Making up for that loss so far has been the powerhouse French front line led by the astonishing Kylian Mbappe, who might just be the world’s most talented player today.

Fast, quick, decisive and lethal near the opposing goal, this man simply dazzles on the soccer field, particularly when he’s in the mood, as he has mostly been so far in the World Cup. He has venerable Olivier Giroud and Antoine Griezmann up front with him. It’s hard to imagine that the English defense can keep these prolific scorers quiet.

To win, the English will need to outscore their opponents, and they’ll need Harry Kane of Tottenham to shine in order to succeed. Overall, England might have a slightly more balanced squad, but they have little more than a puncher’s chance against the title holders.

Elsewhere, Portugal, showing its depth without major contributions from no-longer-ageless Cristiano Ronaldo, walloped a respectable Swiss side and should advance to the semi-finals by beating upstart Morocco, also on Saturday. The Moroccans shocked Spain in a penalty shoot-out on Tuesday, producing the only surprise entry in the quarterfinal round. Portugal would face the France- England winner for a spot in the World Cup finals.

On the other side of the draw, the pre-eminent South American giants Argentina and Brazil seem headed for a semi-final collision. Tomorrow, the Argentines, buoyed by a resurgent and focused Lionel Messi, should be able to defeat a Dutch team that cannot match their creativity or finesse.

Waiting for Argentina should be their perennial rivals from Brazil. A sturdy Croatian team stands in Brazil’s path. With a stellar midfield led by incomparable Luka Modric and other accomplished veterans, this much decorated team will challenge the superstars from Brazil, but like the French whom they are favoured to meet in the final, Brazil’s offensive stars and awesome depth should see them through.

Look for a titanic Argentina–Brazil game next Tuesday to determine a place in the finale.

Junior Junkanoo is back

UN report: Caribbean and Latin American region has the highest cost for a healthy diet compared to the rest of the world

Tourist arrivals back at 7 million

‘No surprise’ at increase in sex crimes, say activists

DAVIS: STAY OUT OF MY BUSINESS – PM hits back at FNM leader over calls for reshuffle

BTC internet goes down in eastern New Providence while paying customers are given “friendly reminders” to PAY DEY NOT DUE BILLS!

Safe Return of the Diplomatic Staff Stations in The Bahamas Embassy Port-au-Prince, Haiti…

THE MINISTRY OF TOURISM, INVESTMENTS & AVIATION ON VISITOR ARRIVALS