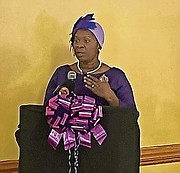 BNATUC president Ms Wilson - who is also head of the BUT - said key priorities of the umbrella union includes advocating for fair and improved working conditions for its affiliates and providing recommendations for a minimum and liveable wage.

“Our motto is protecting workers rights,” she said. “We did not choose this umbrella by a mistake, but it was intentional because we pledged to cover and protect all workers in the Commonwealth of The Bahamas.

“Our priorities are to assist affiliates with the successful completion of negotiations for new industrial agreements. We are going to monitor the labour legislation in this country as it relates to the industrial relations act and the employment act.

“We will participate in the national tripartite process. We will provide recommendations for minimum wage and the liveable wage. We will examine the components of the Memorandum of Understanding signed by the government and unions.”

She added the new congress will also focus on training and professional development and seek to re-establish a labour college for young trade unionists.

According to Mrs Wilson, members of BNATUC are no longer affiliated with other umbrella union bodies.

This comes after National Congress of Trades Union’s acting president, Dwayne Woods told Tribune Business last week that BCAWU had advised in a letter its intentions to break away from the NCTU “effectively immediately.”

“Every one union you see here was a part of another congress (but) as of today, we are no longer affiliated with any other congress other than the Bahamas National Alliance Trade Union Congress,” said Mrs Wilson.

Asked if the creation of the new congress sowed disunity among the umbrella unions, Mrs WIlson said: “Out of adversity, great things happen and so I believe today that The Bahamas National Alliance Trade Union Congress is a great thing.”

She also commented on labour relations in the country, saying there is still much work to be done to improve working conditions.

“Labour relations still has a lot of work to do,” she added. “We see that the new government has appointed some labour consultants, which in our view it means they are starting the process to say ‘we have provided individuals for you to communicate with’, so that’s a start, but, again, we have to ensure that whatever issues that are brought to the table are not just heard, but they’re acted upon and that they are resolved.”

“I think labour issues linger too long and we don’t know if it’s a political will to correct the things that we highlight that’s a problem or to really resolve it so we have to ensure that they put action behind whatever it is that they’ve spoken be it in the House of Assembly or on another platform.”

They were all installed in their posts during a brief ceremony at the BPSU hall yesterday.

DIANE PHILLIPS: Who really named The Bahamas? Was it Lucayans, not the Spanish and does it really mean what we think?

BTC not at Liberty’s top as revenue rise flattens

‘The swimmers can be extremely happy with their performances’

Cyclists get in gear for Sunday’s gruelling road race

Three reasons why you should start before you are ready

Back pay for nurses not fully paid, union says

The burden of illegal immigration

Bay Street needs to return to its glory days

Junkanoo Summer Festival Is Back, Bigger and Better

Shenseea Working On Her Sophomore Album With Stargate & Rvssian

Two injured in shooting at church

Man pleads not guilty to indecent assault of university students

DIANE PHILLIPS: Green high-top Converse a symbol of pain too much to bear

A candle for Quinton

Woman goes to jail for lying on Police Officer…

Diddy Opens Up About Dating Yung Miami: “We Go to Exotic Locations”

‘Still among leaders’: But Bahamas’ FDI down 60%

Vehicle theft claims ‘out of the ordinary’