Gongphu-Panbang highway blocked for about a week 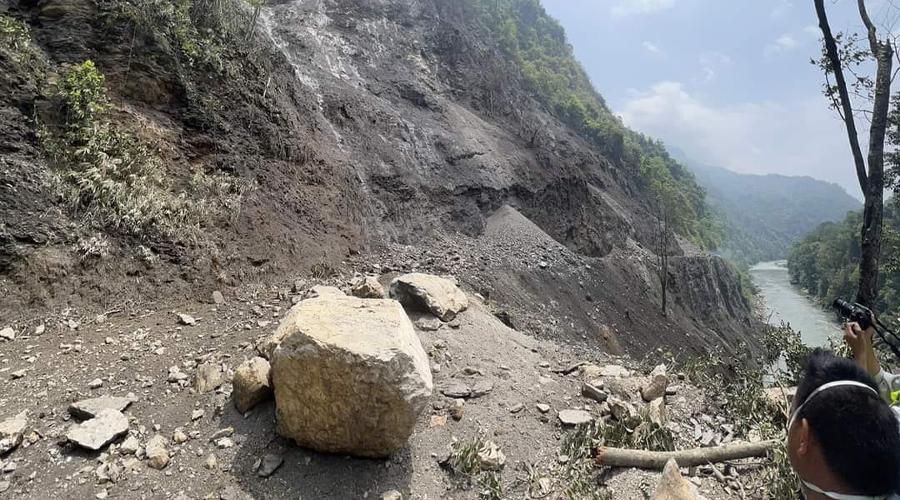 The Gongphu-Panbang highway has been blocked at Laylangang in Zhemgang for about a week now.  The continuous landslides and falling boulders had been impeding the clearing works. The Department of Roads has for now suspended the works.

The recent rainfall caused landslides at Laylangang which is about 76 kilometres from Zhemgang towards Panbang. The landslides had blocked the road since Saturday. The highway connects the lower Kheng gewogs of Ngangla, Goshing, Phangkhar and Bjoka to Zhemgang.

CB Mongar, the chief engineer of the Roads Department at Tingtibi said the area is seeing frequent landslides. There are incidences of falling boulders hitting excavators and vehicles plying the road.

“We are ready to clear it if the site is stable. We can do it overnight but the problem is that the situation is severe at the moment. There will be a disaster once the traffic is opened since the intensity of the traffic out here is very high at the moment,” he said.

The commuters are asked to use an alternate route via Panbang and Goshing.

“At the moment, the traffic for 4WD vehicles is diverted from the farm roads from Panbang to Bjoka, Bjoka to Kaktong and Kaktong to Lichibi village via Goshing and then to the connecting highway, which is 34 kilometres longer,” added the chief engineer.

He said the road clearing works will resume once the site is fully stabilized. The road officials caution to avoid travelling through the road until further notice.