Surrounded by her family and adorned in Liberal red, Dominique Anglade took to the stage Monday night and declared her victory as leader of the official opposition represented a win for unity in Quebec, in what was often a divisive campaign.

“During the whole campaign we hammered on the message of coming together, saying that each voice must be heard, and it’s more important than ever,” Anglade said to a cheering crowd of roughly 100 supporters and Liberal party staff at the Corona Theatre in her riding of Saint-Henri—Sainte-Anne, at 10:15 p.m. Until 45 minutes earlier, Anglade’s win in her own riding had not been certain, particularly due to a concerted campaign by Québec solidaire to push her out.

“To all Quebecers: If you voted for us or for another political party, my door, our door, will always, always be open,” Anglade said.

Then, in English: “Let me make it clear, we will represent all Quebecers of all stripes.”

Liberal supporters at the Corona Theatre took solace in the fact their party would become the official opposition, even if they were far from coming into power.

Minutes after the major networks pronounced Quebec had once again elected a Coalition Avenir Québec majority government, it was announced the Liberals had won what became the main race of this campaign — to decide who would make up the official opposition — buoying the small crowd of supporters and party workers present early in the evening.

Although the Liberals were headed toward winning roughly 24 seats as of 11:30 p.m. — far fewer than the 31 they took in the last election — the descent wasn’t as precipitous as some forecasts had predicted. When this election campaign started, the Liberals had 27 seats.

“It wasn’t a surprise” that the CAQ won, said former finance minister Carlos Leitão, who chose not to run in this election but served as president of the Liberals’ campaign.

“Still, it appears we will be able to retain the official opposition status, which is important because that will allow us to then fully take the next four years to rebuild and refocus the Liberal party. So we are still strong in our strongholds, our base in Montreal.

“Now we need to make the bridge with the rest of Quebec, and we have four years to do that.”

The Liberals’ message that they would be the party of the 21st-century economy, bringing together economic projects focused on environmental issues, failed to resonate, Leitão said. He also conceded the first weeks of the Liberal campaign, during which the party’s inability to find a full slate of 125 candidates dominated headlines, were “catastrophic.”

Anglade’s communications director Jérémy Ghio said incumbent premier in the last weeks gave the Liberal campaign a boost. Party workers and volunteers called more than 100,000 potential voters on election day to get out the vote.

“I think the things that were said convinced a lot of voters who were still on the fence to come out and vote for us,” he said. 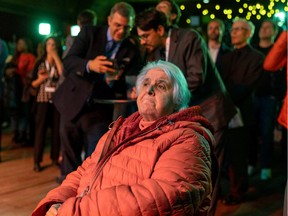 Many supporters at the Corona said they had come out because the Liberal party, and its leader, shared their value system.

“Her vision of society reflects my values, in that she wants a society that is open, inclusive, that sees all citizens as equal — be they Muslims, new immigrants or French-Canadians,” said Michel Fontaine, who came in from Sorel-Tracy to support Anglade. “That’s what I like about the Liberal Party.”

A Parti Québécois supporter in the past, Fontaine said he shifted to the Liberals about 10 years ago because he didn’t like the form of nationalistic identity politics emerging in the PQ. Founder René Lévesque would not have appreciated it either, he said, as Lévesque espoused a civic nationalism open to all peoples. Legault is pushing a quieter form of identity politics, Fontaine said, but one that has become more outspoken in recent weeks.

Yseult Jean-Marie, a teacher and longtime supporter of the Liberal party who is of colour and came out to support Anglade Monday night, said Legault’s message was clear to citizens like her: “It makes us feel like we don’t belong,” she said. “It hurts.”

Polls indicated support for the Liberals barely budged since the start of the campaign, with the CAQ slipping five points to 38 per cent support versus 16 per cent for the Liberals in the most recent polls. Liberal party members were hoping negative publicity surrounding CAQ statements demonizing immigrants in the last week of the campaign would bring some voters back to their fold.

Anglade shifted the theme of her campaign from the economy to the promise the Liberals were the only party that would speak for all Quebecers and bring unity, as compared to what she called the divisiveness of Legault’s rhetoric.

With the election results showing the Liberal campaign has lost much of its historic dominance — the party garnered just 14 per cent of the overall vote, less than the Parti Québécois and Québec solidaire, which had 15 per cent — the question now becomes how the party can regain its following, particularly among francophone voters, only seven per cent of whom said they planned to vote for the Liberals in this election.

The party was spared annihilation in part because it retains enough of a bulwark of ridings, mostly in western Montreal thanks to anglophone and allophone supporters, to guarantee enough seats to maintain official party status. With the exception of Pontiac riding in western Quebec, all of the seats won by the Liberals were in or close to Montreal.

The PQ, which has been decimated by the loss of support for sovereignty, was not as fortunate, with early projections forecasting three seats for the party. The 2018 election, in which the PQ won only 10 seats, marked the first time since 1973 the party neither formed the government nor served as the official opposition. Monday night’s results were even worse.

“It’s a crisis for the Liberals,” said Daniel Béland, director of the McGill Institute for the Study of Canada, in the days leading up to the election. “It’s maybe not as dire as for the PQ, but it’s a long-term crisis.”

In the final weeks of the campaign, the Liberals had a blitz of radio and TV interviews and visits to sure-bet, not-so-sure-bet and no-chance-in-heck ridings in Montreal, Quebec City, the Eastern Townships and the South Shore. Many of those places had a very similar history: they had been Liberal strongholds for years, if not decades, then went to the CAQ by slight or wide margins in 2018, and for the most part looked like they would do so again this time around.

Even a onetime sure bet like La Pinière — the former South Shore riding of Gaétan Barrette, won handily by the Liberals in 2018 — was not certain, despite the fact the area is home to multicultural communities such as Brossard. As the final ballots were being counted Monday night, Liberal candidate Linda Caron was ahead by just over 1,900 votes.

FACT FOCUS: 5 full-court shots a stretch even for Curry