Asia Argento has seemingly lashed out at her villainous portrayal in a new unauthorized Anthony Bourdain biography.

In Charles Leerhsen’s Down and Out in Paradise: The Life of Anthony Bourdain, the journalist shares a text message conversation between the couple on the night the late celebrity chef committed suicide in June 2018.

“Is there anything I can do?” Bourdain pleaded with the Italian actress in their final exchange.

“Stop busting my balls,” Argento wrote back, to which Bourdain then replied: “OK.”

After snippets of the book started making the rounds this week, Argento, 47, posted a picture to her Instagram Story with those same words on Thursday. 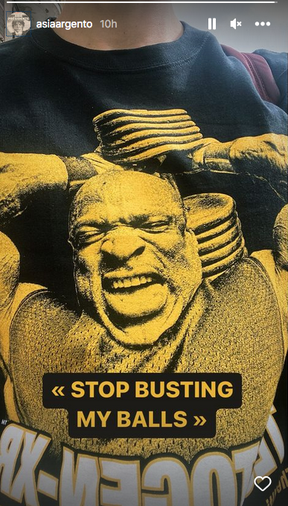 Leerhsen’s book, excerpts of which were published by the New York Times, details Bourdain’s downward spiral and complicated relationship with Argento.

“I find myself being hopelessly in love with this woman,” Bourdain shared in a text message with his ex-wife, Ottavia Busia-Bourdain.

Elsewhere, he complained about fame and his globe-trotting life.

“I hate my fans, too. I hate being famous. I hate my job. I am lonely and living in constant uncertainty,” he texted his former wife.

According to the book, Bourdain financially supported Argento and her children and even paid a settlement to a young musician and actor who accused her of sexual battery. 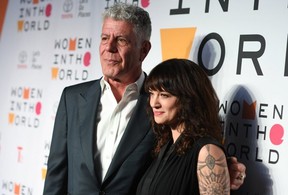 But the Parts Unknown host became enraged when he saw photos of Argento dancing with the French reporter Hugo Clement in a hotel they had stayed together in.

“I am okay,” he texted her. “I am not spiteful. I am not jealous that you have been with another man. I do not own you. You are free. As I said. As I promised. As I truly meant. But you were careless. You were reckless with my heart. My life.”

Hours later he hanged himself in the shower of his hotel.

Leerhsen said he had exchanged several messages with Argento, who quoted Oliver Wilde in one of her responses: “It is always Judas who writes the biography.”

Down and Out in Paradise: The Life of Anthony Bourdain hits bookstores on Oct. 11.

No. 2 Houston off its game, but survives scare from Kent St.

Court rules employee can’t be sacked for being ‘boring’

Soccer-Messi brings Argentina to life, but can he match Maradona?

Messi leads Argentina to win over Mexico at World Cup

Edmonton Oilers rally in third for win over Rangers

N.B. mother wants change after police mistakenly told her her son had died

After tough loss, LSU back home to take on Wofford

Visiting family for the holidays? How to stay safe amid rising COVID, flu and RSV cases

No. 8 Duke and No. 24 Purdue clash in Phil Knight final

Man, 20, dies after head-on collision in the Eastern Townships

Soccer-Magnificent Mbappe has France scoring records in his sights

No. 13 Auburn leaning on defense as Saint Louis visits

Missouri off to 6-0 start with rout of Houston Christian

N.B. mother wants change after RCMP mistakenly told her her son had died

Makeover: Celebrating a new look for the festive season

Advocates fear visa problems ahead of COP15 in Montreal

The world’s largest T. rex, held in Regina, may have relatives 70 per cent bigger

Canadian military would be 'challenged' to launch a large scale operation: Chief of the Defence Staff

‘IT’S NOTHING SPECIAL’: Japanese fans tidy up at World Cup, surpising many

Metro Vancouver in for some cold and snowy weather this week

Venezuela’s frozen funds to be gradually released for humanitarian aid

GOLDSTEIN: Trudeau government fails another test of its so-called ‘transparency’