'Bring her back,' say RCMP to suspect in Amber Alert issued for six-year-old girl

The girl is described as having brown, chin-length hair and was last seen wearing a navy-blue, long-sleeve T-shirt, black jeans, pink socks, no shoes, and was wearing a diaper. She is three feet six inches tall and is 44 pounds.

O'Keeffe has epilepsy and autism and police say she is non-verbal and unable to walk. Police said she is on medication for epilepsy that needs to be taken "in a strict time frame" every 12 hours and missing a dose could lead to extreme medical distress. It's unclear if she has access to her medication. 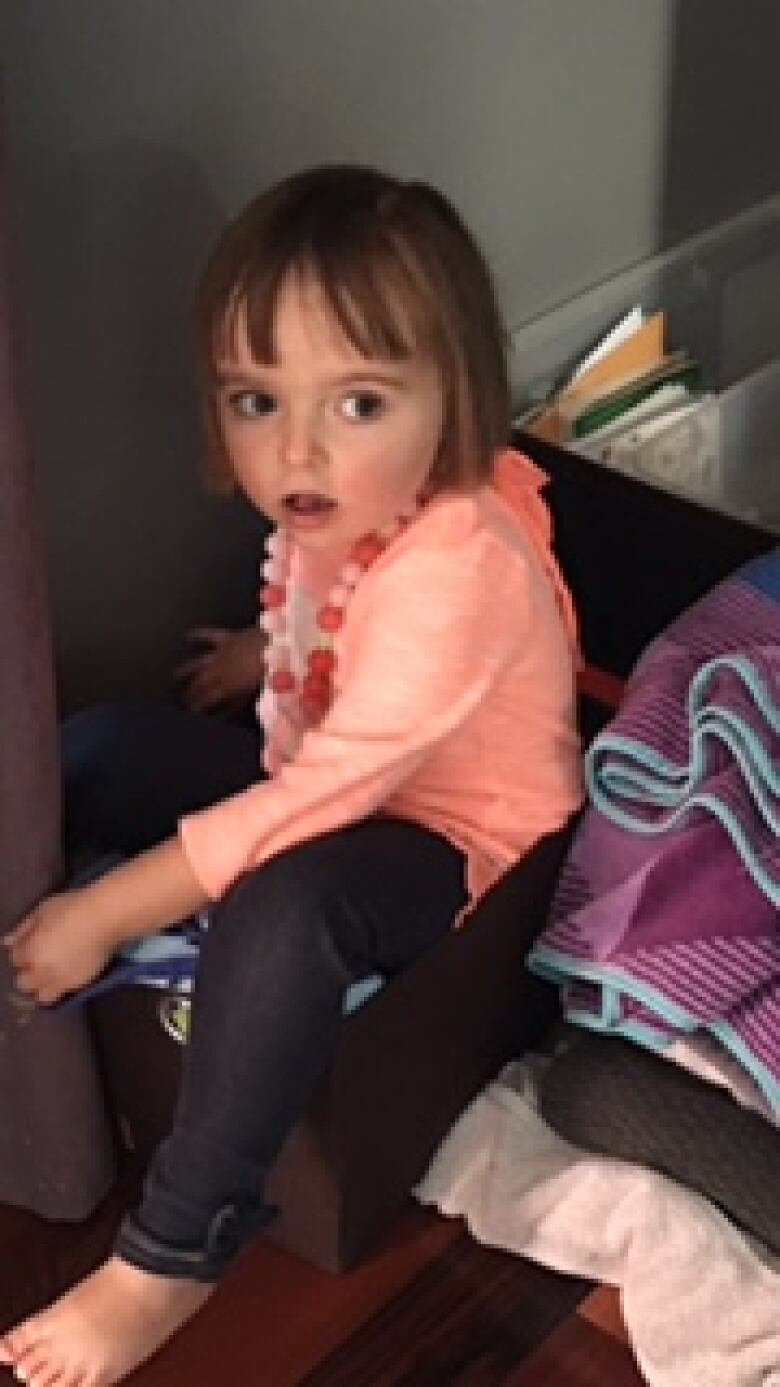 Emma O'Keeffe has epilepsy and autism and police say she is non-verbal. (RCMP)

Police said they believe the car was stolen with the child inside.

The mother left the car unlocked and running outside a strip mall at 11204 Railway Avenue in North Battleford at around 5 p.m. CST Sunday.

RCMP Cpl. Rob King had a message for the person who stole the car: "Bring her back. Quite simply. Bring her to the nearest detachment…. Contact 911 yourself. Do whatever you can to get her back."

Police say the vehicle has a keyless system so once it stops it will be immobilized. They believe there was half a tank of gas left in the car when it was taken.

There is no description of the person suspected to have taken her at this time, but the suspect is believed to be driving a dark grey 2010, Mercedes Benz GL350 Bluetec SUV with Saskatchewan licence plate 897 HMX.

The direction of travel is unknown but they are expanding the search to Manitoba and Alberta.

Police are asking gas stations across Western Canada to be on the lookout for this stolen SUV as the vehicle will require gas and may attempt to stop and fill up at some point.

Krista Clark, a friend of the family, told CBC News claims that O'Keeffe is unable to walk are not correct.

"She can walk," Clark said. "She can move about freely. At home she walks from room to room.… They have to barricade the Christmas tree so that she doesn't take things she shouldn't have."

Police said they don't believe the child could free herself from a car seat, but Clark said she's concerned that if the car thief removed O'Keeffe, the girl would be in trouble.

"If she were to be removed from the vehicle and left on the side of the road she would wander in any direction, into the road, into a field."

Clark also said O'Keeffe does not respond to her name.

"If she were seen and people called out, 'Emma!' she wouldn't respond to it necessarily and she is not able to say that she needs help or that she doesn't know where she is."

Emma laughs when she's entertained and cries if she's upset and can communicate non-verbally with family members but she is unable to speak.

If she were seen and people called out, 'Emma!' she wouldn't respond to it necessarily.- Krista Clark, family friend

Clark's No. 1 concern is that the child is brought home safely.

"Everyone we know in North Battleford is out looking right now for her."

Stefano Pioli: teo can become one of the best extreme defenders in the world
Arteta wants Ceballos to stay at Arsenal: he has become a really important player for us
Mourinho on son and Lloris clash: It's beautiful. If you want to blame someone, it's me
Real Madrid players will refuse bonuses for all the trophies they win this season
Barcelona are confident that they will sign Lautaro by October. Inter wants 90 million euros and one player
Aitor Karanka: If there is a team that can win back against Manchester City, it is real
Juventus and Atletico have started talks about the transfer of Lacazette. Inter are also Interested in him
Source https://www.cbc.ca/news/canada/saskatchewan/amber-alert-six-year-old-girl-north-battleford-1.4826174?cmp=rss

N.Korea says it won’t sit down with U.S. as envoy due in S.Korea

Vancouver Park Board delays decision on drinking in parks

Lakers’ Dwight Howard says he will play when season resumes

Controversy over airborne transmission of COVID-19 'a tempest in a teapot,' Dr. Bonnie Henry says

Australia border businesses brace for chaos ahead of coronavirus closure

TikTok to stop operations in Hong Kong within days: spokesperson

Pelicans’ Ingram not convinced season will be completed

Report: Munhoz positive for COVID-19, out of next bout

Getting around: Queensway open again between Carling and Bronson exits

Dodgers OF Betts has doubts that season will start

Canada’s LNG industry on shaky ground as high-profile investors back off: report

Mexico’s coronavirus pandemic could last until next April -health official

The latest numbers on COVID-19 in Canada for Monday, July 6

BRAUN: Now is the time to reunite LTC residents with their loved ones