As the world confronts a warming climate, the federal Liberals are committing billions more dollars to a variety of measures meant to reduce greenhouse gas emissions across the economy and help drive a "green recovery" from the pandemic-induced economic slowdown.

"We are at a pivotal moment in the green transformation," Freeland said in a speech to the House of Commons.

"We can lead, or we can be left behind. Our government knows that the only choice for Canada is to be in the vanguard."

Freeland said the measures will help the government meet its greenhouse gas reductions targets under the Paris climate agreement, achieve net-zero emissions by 2050 and preserve 25 per cent of land and marine conservation targets by 2025.

But environmentalists said the budget measures fall short of the transformative change needed for Canada to become a climate leader.

Federal Finance Minister Chrystia Freeland delivered her first budget on Monday in the House of Commons.

In what appeared to be the announcement of a new federal emissions reduction target, Freeland said the new measures will help reduce greenhouse gas emissions in Canada by 36 per cent compared to 2005 levels by 2030 — well beyond the government's current target of 30 per cent.

Environment Minister Jonathan Wilkinson's office later clarified that the 36 per cent number represents the floor for a new target — not the actual target. Prime Minister Justin Trudeau is expected to unveil a more ambitious national emissions reduction target at a climate summit hosted by U.S. President Joe Biden this week.

Much of the proposed spending focuses on giving private sector companies incentives to develop and adopt clean technology.

Five billion dollars over seven years will go to a fund that helps large-emitting companies reduce their greenhouse gas emissions. The government says the Net Zero Accelerator will help steel, aluminum and cement producers and the auto and aerospace sectors cut pollution and invest in clean technologies.

To help foster a domestic clean technology manufacturing sector in Canada, the government said it will offer companies that manufacture zero emission devices, like solar panels and electric vehicles, a 50 per cent cut to their corporate or small business taxes for the next 10 years.

For homeowners and landlords, the budget includes a $4.4 billion plan to retrofit residential buildings to make them more energy efficient. The money will flow through the Canada Mortgage and Housing Corporation (CMHC) and will take the form of interest-free loans of up to $40,000 for projects like replacing oil furnaces with higher-efficiency furnaces, installing better wall insulation, adding solar panels or replacing drafty windows and doors.

The government estimates more than 200,000 households could take advantage of that program. 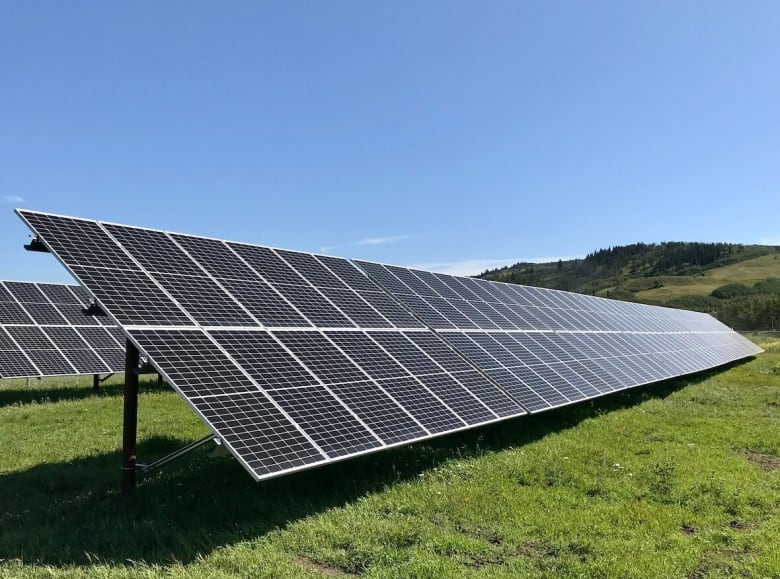 Corporations and small businesses that produce zero-emissions technology, including solar panels, will be eligible for a tax credit to reduce their tax burden. (Dan McGarvey/CBC)

Another initiative targeting heavy emitters is a tax credit for companies that invest in technology that captures carbon dioxide emitted by fuel combustion or other industrial processes and stores it in the ground instead of releasing it into the atmosphere. The budget said the government will undertake a 90-day consultation process to determine the rate of the incentive for capital investments in carbon capture, utilization and storage (CCUS).

"Canada is a leader in CCUS, with domestic projects that currently capture 4 megatonnes of carbon every year, but we have the technical and geological capacity to capture and store much more," the budget document said.

Alberta Premier Jason Kenney, who is a strong proponent of carbon capture technology as a way of reducing emissions from the province's energy sector, recently asked the federal government for $30 billion in funding to explore CCUS technologies. But in addition to the tax credit, today's budget pledges only $319 million over seven years for the federal natural resources department for carbon capture research and development.

Other climate initiatives include the establishment of a federal "green bond" designed to attract investment to projects that can help Canada meet its climate goals, like green infrastructure and nature conservation.

Getting more electric vehicles on the road is a priority for the Liberals under their net-zero emissions plan and the budget promises $56 million over five years to work with countries like the U.S. on bringing in standards for zero-emission vehicle charging and refuelling stations.

Monday's budget also promises $2.3 billion in funding to federal departments like Parks Canada and Fisheries and Oceans to conserve up to one million square kilometres of land and inland waters to meet the country's 2025 conservation targets.

Environmentalists reacted with a mixture of praise and criticism to the climate portion of the budget. Many said they were happy to see increased investments in things like clean technology and home retrofitting. Others criticized the fact that some of the funding would go to oil and gas companies.

"Some investments made by budget 2021 are extremely worrisome — investments in carbon capture and storage risk perpetuating our dangerous addiction to fossil fuels, and some of the forestry investments perpetuate a transactional relationship with nature that treats it like a commodity we can trade."

"Hiding in the details of this budget were some concerning elements, including a new commitment of more than $6 billion in financial support and new tax breaks for high-emitting sectors, including oil and gas," said Levin. "We need to be starting the wind-down of the oil and gas sector in order to ensure that we have a liveable planet. These supports do the exact opposite."