Beloved Regina community member and chef Warren Montgomery has passed away after a battle with COVID-19.

Global News confirmed the news with some of his closest friends on Tuesday.

Montgomery was the owner and operator of The Big Easy Kitchen, a pop-up and catering service offering a taste of southern comfort food with both local and authentic southern ingredients.

Born and raised in New Orleans, his goal was to bring the food he loved growing up to the Queen City.

“Just being around Warren made you want to go to New Orleans. He brought that spirit with him, his love for food and his love for his culture. It just shone through when he was in the kitchen,” said Tim Shultz, Meld Neighbourhood Eatery partner and Local and Fresh owner.

Before it was Meld Neighbourhood Eatery, it was a rotational market kitchen allowing other chefs in the community to use it for weeks at a time.

“It was a brand-new concept for Regina at the time and there were days where we didn’t do so well,” Shultz said. “Warren believed in us and that meant a lot to my wife and I as owners.

“Whether it was a really slow day or whether we had lineups, it was always the same Warren interacting with customers. That was something we just loved about him.”

Kandace Holness, a friend of Montgomery, started GoFundMe Page on Sunday to raise funds to help pay for any costs related to lost income and recovery.

In a post, she said Montgomer — along with his wife, Roshelle, and two daughters — had been battling the U.K. variant of COVID-19 for a couple of weeks.

She said Montgomery was first admitted to the hospital on April 13 and was transferred to an intensive care unit four days later.

“Warren is a bright light to those that know him. He is an amazing father and husband,” Holness said on the GoFundMe page. “He has filled so many hearts and bellies with so much amazing southern cooking, helping share his roots right here in Regina.”

Read more: 94-year-old walking from Saskatoon to Regina to fundraise for sick kids

When Schultz heard the news of his dear friend, he planned a fundraiser of his own Tuesday, offering Taco Feast Platters with proceeds going to Montgomery’s family.

Many other community members stepped up to donate ingredients for the fundraiser. 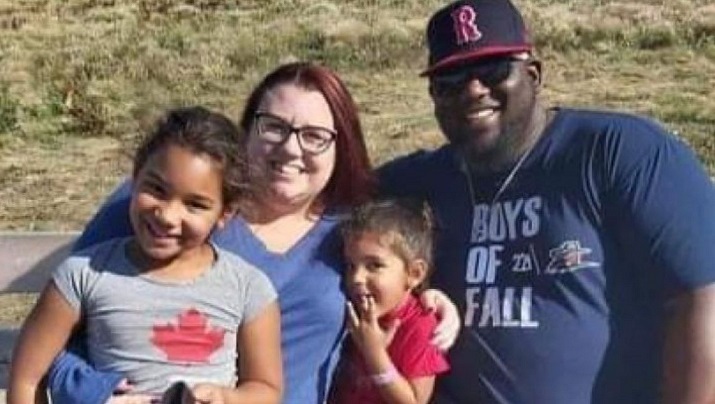 Warren Montgomery along with his wife Roshelle and two daughters. Credit / GoFundMe Page

“We fully understood the gravity of the situation on Saturday and in communicating with those who knew him really well and with his wife directly, we just felt like we had to do something,” Schultz said.

“It’s been incredible just to see a community rallying around someone that had that kind of impact.”

Global News has reached out to Montgomery’s wife and will update the article when we hear back.