Police are asking for the public’s help in locating four men who are suspected of being involved with a stabbing incident in downtown Edmonton on Sunday.

On Oct. 2, at around 3:30 a.m., police said a 57-year-old man was confronted by two unknown men in the area of 99 Avenue and 104 Street. The two men pushed the victim over and stabbed him repeatedly while two other men watched, police said.

All four suspects then ran away from the scene. The Edmonton Police Service said the victim got the attention of bypassers who administered first aid until EMS arrived.

The victim was taken to hospital with serious injuries.

Following the assault, the group of suspects proceeded north on 104 Street where they encountered a man outside of a building in the area of 100 Avenue. Police said they believe the four suspects attacked the second victim “without provocation.” One of the suspects reportedly produced a knife and attempted to stab the victim.

The victim was not co-operative with officers, but the incident remains under investigation, police said.

The third suspect is described as having a medium build. He was wearing a dark grey balaclava, a black jacket with a hood, black track pants with white stripes on the sides, white shoes and a distinctive backpack. The fourth suspect was said to have a dark beard and dark, short hair and was wearing a grey hat with an “Under Armour” logo. He was also wearing a dark puffy jacket, dark pants, a dark shirt with a white “Kappa” logo on the chest and black slip-on sandals. 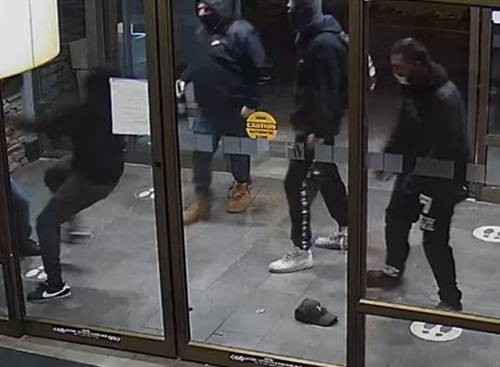 Due to the unprovoked nature of these attacks, police said they are concerned and are looking to speak with anyone who may have witnessed the incident or have knowledge of those involved.

Tabloids fume, many in UK shrug over Harry and Meghan series

Allison Hanes: Can we get off the path to extinction?

In a housing shortage, the only way to go is up

US sanctions companies for rights abuses in Chinese waters

Make entertaining a cinch, even for Grinch!

Shedding light on dust as a household hazard

Vancouver Weather: Cloudy, with a chance of showers

Bam Margera admitted to hospital with pneumonia, on ventilator

Colin and Justin: Is now the time to buy a cottage?

Iran’s Raisi vows to pursue crackdown on protesters after execution

ANALYSIS: Connor Hellebuyck is a treat to watch as Jets’ winning ways continue

Ivison: Justin Trudeau, China and the death of free trade

Brittney Griner back in U.S. after Russian prisoner swap

Cardi B gets most of her butt fillers removed

Israel’s Netanyahu gets extension until Dec. 21 to form government

As inflation persists, Canadians are forced to cut back. How are they saving?

In China’s Wuhan, a shadow of reserve and resentment even as COVID lockdowns ease

COP15: Progress slow but some agreements made at biodiversity talks, Guilbeault says

Camaraderie meets creativity in Blackie and the Rodeo Kings

Parents upset about ear-splitting construction noise next to school

From missing family time to making food, Canadians are cutting back amid inflation

Plane believed to be carrying Griner lands in US

Mired in disputes about its fate, historic St. John's cottage destroyed by fire

In The News for Dec. 9: Playing Santa by mail will cost you more this holiday season

As nature talks unfold, here’s what ’30 by 30′ conservation could mean in Canada

Greek police officer in court over shooting of Roma teen

Yale ready for big test vs. No. 16 Kentucky

No. 2 Texas looks to rebound vs. Arkansas-Pine Bluff