Immigration Minister Marco Mendicino will unveil a three-year immigration plan today that will set targets for bringing skilled workers, family members and refugees into Canada in the midst of a global pandemic.

Last year's plan promised to bring in more than one million immigrants over a three-year period, but the COVID-19 crisis and the resulting travel restrictions have slowed down the process. Mendicino said the government remains committed to welcoming newcomers as a way to keep Canada's economy afloat.

"We believe strongly in building Canada through immigration. Immigration is helping us get through the pandemic, and will be the key to both our short-term economic recovery and long-term prosperity," he said in a press statement to CBC News.

"That's exactly why we need to continue with measured, responsible growth to drive Canada's success into the future." 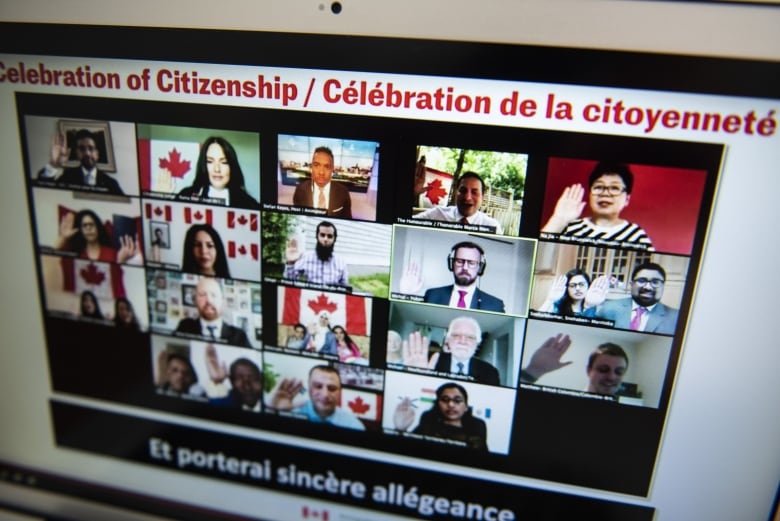 Minister of Immigration, Refugees and Citizenship Marco Mendicino, second from top right, leads participants as they raise their hands to swear the oath to become Canadian citizens during a virtual citizenship ceremony on Canada Day 2020. (Justin Tang/The Canadian Press)

The immigration level plan is expected to be tabled in the House of Commons at about noon ET, and Mendicino is scheduled to hold a news conference in Ottawa at 12:30 p.m. ET.

Traditionally, Ottawa's goal in immigration policy has been to attract top talent in a competitive global market while reuniting families and offering refuge to people displaced by disaster, conflict and persecution.

Leah Nord, senior director of workforce strategies and inclusive growth for the Canadian Chamber of Commerce, said the world has changed a great deal since those targets were set. However the government chooses to set its immigration targets in today's new policy, she said, it will have to focus squarely on matching economic migrants to worker shortages in various sectors and regions of the country.

Despite changes in the labour market and a major spike in the unemployment rate since the onset of the pandemic, gaps in the market remain, Nord said — and immigration will continue to play a large role in filling persistent labour shortages.

"We're in this rather strange situation where we do have higher unemployment rates than we've seen for a number of years. Before the crisis there were record low unemployment rates. Now, they're tipping towards the other end," she said.

"But we still have a situation where there are still job vacancies and jobs that need to be filled across the country. Immigration can play an important role in diversity and economic growth, but also in filling labour market gaps, for sure."

The government's Advisory Council on Economic Growth recommended that Canada boost its annual immigration levels to 450,000 by 2021 to stimulate the economy and tackle the twin labour market problems of an aging population and a low birth rate.

Conservative immigration critic Raquel Dancho said that whatever the Trudeau government announces today, it must have a concrete plan for bringing people safely into the country during a pandemic and for integrating them into Canadian society.

She said the backlog of applicants has grown during the pandemic. 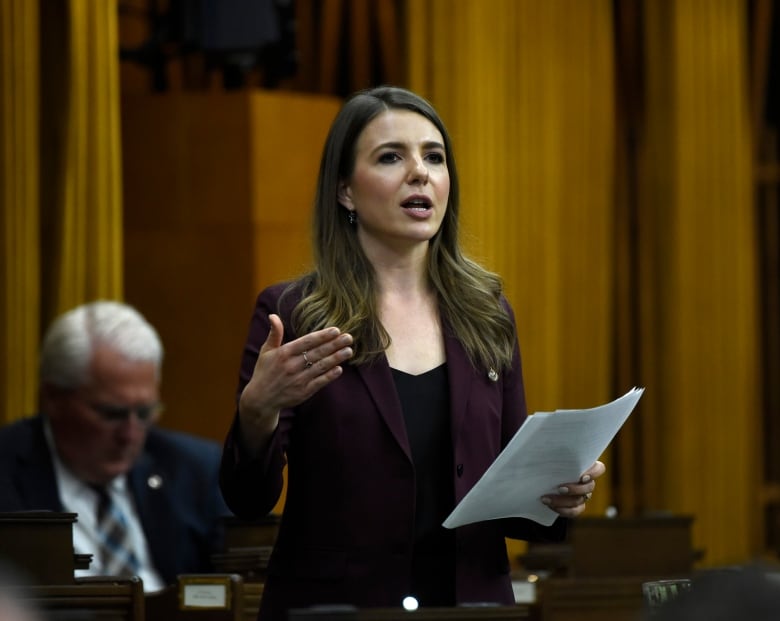 Conservative immigration critic Raquel Dancho says the federal government has to prepare both for bringing new people to Canada in the middle of a pandemic and for integrating them into Canadian society once they're here. (Justin Tang/The Canadian Press)

"The immigration system has not been well-managed, I think to say the least, in the last eight months. So I will be looking for some sort of plan for how they're going to improve it," Dancho said.

"The number can be whatever it's going to be, but unless they bring forward a plan for how they're going to change course and get better at processing immigration applications, it's really all for nothing."

Dancho said Canadians must have a clear explanation of how immigration targets will meet Canada's labour needs while upholding its humanitarian commitments.

NDP immigration critic Jenny Kwan urged the government to increase its capacity to help vulnerable people in need of protection in Canada, noting that persecution abroad has not stopped during the pandemic.

She said Canada also should give permanent residence status to people who want it and are already in the country, such as temporary foreign workers and international students with job offers.

"Canada can, in fact, take a true humanitarian approach by regularizing all those immigrants and refugees and undocumented people," she said.

Ludicrous omission of the Champions League match: the Brugge forward did not want to transfer to the bus, and he was kicked out
Ronaldo has scored 15 consecutive seasons in the Champions League
Holland scored 15 goals in 12 matches in the Champions League in his career. He shares first place in the goalscoring race this season with Rashford
Brugge forward Dennis misses the match against Borussia due to not being able to sit in his favorite seat on the bus
Barca and Milan are Interested in 18-year-old Hoffenheim defender Bogarde. His contract expires in the summer of
Simeone on Loko match as a respite for Atletico: I have a different opinion. The game is important
Angel Correa: This year, Atletico creates chances and implements them. We didn't have any luck before
Source https://www.cbc.ca/news/politics/mendicino-immigration-pandemic-refugees-1.5782642?cmp=rss

Forced to change plans, Co.ERASGA focuses on the healing power of (solo) dance

The latest on the coronavirus outbreak for Nov. 24

New Music: 5 things to know about Self Help by Badge Époque Ensemble

Alberta Is Among ‘Most Pro-Mask’ Provinces In Canada, Health Minister Claims

Map gap: Where are treaty boundaries on digital maps?

'Listen to the communities that you serve:' What the delegates had to say at police board meeting

As U.S., U.K. plan to roll out vaccines in December, Canada largely silent on distribution

Lack of Canadian vaccine production means others could get inoculations first: PM

Budget-Friendly Gifts Under $20: Thoughtful Presents For Loved Ones

Fossil fuels to decline but remain big player in Canada's energy use by 2050: report

While you were sleeping: The joke's on you, because Tuesday isn't cancelled

Many Canadians Gained Weight During The COVID-19 Pandemic: Poll

I'm a sound technician. Losing my hearing was devastating